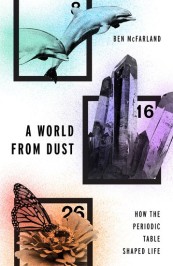 A World From Dust: How the Periodic Table Shaped Life

Powell’s City of Books occupies 1.6 acres of retail floor space in downtown Portland, Oregon and is one of my favorite places in the world. My first time there, I searched out the chemistry shelves–and was slightly disappointed. I counted two cases of chemistry books sandwiched between biology and physics, which had eight cases each.

I’m a chemist, so my perspective is decidedly biased, but, still, this puzzles me. In the Periodic Table of Elements, the entire universe is represented and ordered, stacked up like so many books. Chemistry has carved its own niche in the collective psyche of the popular culture. The stories of Breaking Bad and Big Hero 6 depend on powerful chemists, and chemical symbols and structures decorate ads and T-shirts.

But chemistry also entails “chemophobia.” Ever since the days of the secretive, mystical, and decidedly unsuccessful alchemists, my discipline has evoked some suspicion (after all, chemicals can be noxious and/or toxic). Even the great philosopher Immanuel Kant, in his preface to Metaphysical Foundations of Natural Science, wrote that chemistry “doesn’t strictly count as a ‘science’, and would be better referred to as a systematic art.”

In the past few decades, a group of philosophers have taken issue with Kant’s assertion and have established a specific philosophy of chemistry. They argue that chemistry presents a coherent way of looking at the world that is distinct in philosophy and practice–and that chemists can see aspects of the world that are overlooked by biologists or physicists.

Williams remained an inorganic chemist at heart, and co-wrote an influential inorganic textbook in the 1960s. However, he soon saw how inorganic chemistry influences other areas, such as the chemistry of living things. His writings helped found the field of “Bio-Inorganic Chemistry.” This may sound like a contradiction in terms, but it’s not. The fields of biochemistry and inorganic chemistry synergistically provide insight into how life works in the present and evolved in the past.

In my biochemistry class, I teach no fewer than four crucial stories in this field that Williams developed from his chemical perspective:

Each of these springs from a distinctly chemical insight. Despite having a hand in all of these fundamental discoveries, Williams is not mentioned in the biochemistry text I use. His collaborative spirit allowed others to take the spotlight. Following a recent ACS Symposium titled “The Posthumous Nobel Prize in Chemistry: Correcting the Oversights and Errors of the Nobel Prize Committee,” R.J.P. Williams was mentioned on the short list of scientists who should have won the Nobel Prize but didn’t.

For all of these accomplishments, I find the last two decades of William’s writing to be the most intellectually provocative. Williams co-wrote several books including The Natural Selection of the Chemical Elements (1996), The Chemistry of Evolution (2006), and Evolution’s Destiny (2012). These combine inorganic chemistry with biological evolution to describe a logical chemical sequence that the planet underwent as oxygen was released into the atmosphere over billions of years. As a result, different parts of the periodic table were available to life three billion years ago than are available today, making different chemical structures and causing different reactions.

Williams showed great skill in combining chemistry with biology to tell the story of natural history on a geological time scale. For example, he gave chemical reasons why life uses phosphate to store information in DNA, why life collects magnesium to help stabilize that phosphate, why it must reject calcium to avoid solidifying that phosphate, and why it also must accept potassium and reject sodium to maintain osmotic balance. In Williams’s story, calcium, potassium, and sodium are later used for specific jobs in nerve signaling that are based on their chemistry in water. As a result, the nerves that are firing in your brain as you read this are using these elements in a way that Williams justified using the periodic table.

Williams wrote down most of this story before genomic data became widely available in the first decade of the 21st century. After that data was analyzed, multiple research groups confirmed that the broad outlines of this story are indeed encoded in the DNA of the biosphere. Using his chemical intuition, Williams made predictions and told a story that was later confirmed by multiple lines of evidence.

In conclusion, we can file books onto specific shelves and classify them in multiple ways, but the world does not recognize our disciplinary boundaries. The career of R.J.P. Williams shows how a dedication to one area of chemistry can benefit fields as distant as evolutionary biology. When a chemist looks at a flower or a mountain, she will also see the atomic structures hidden deep within each, and that specific perspective enriches the others.