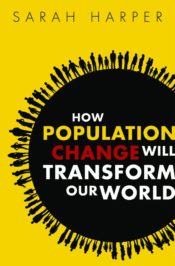 How Population Change Will Transform Our World

John Shropshire used to farm celery just in Poland. Why? Because celery production is labour intensive and Poland had abundant available labour. However, he now also farms in the Fens, Cambridgeshire. Why? Because the EU Single Market gives him access to the labour he needs. Not cheap labour – John pays the living wage to his workers – but available seasonal migrant workers from Central and Eastern Europe – 2500 of them. The strawberries enjoyed at Wimbledon are picked by similar labour, so are the hops in our British brewed beer. Indeed, two thirds of the UK’s agricultural workforce (excluding seasonal workers) is EU born. Many people know this. They also know that a large proportion of our nurses and doctors are from overseas; figures from the Nuffield Trust show that over half the doctors registering to practice with the GMC qualified outside the UK. 38% of food manufacturing workers are foreign born, as are 22% of workers in scientific research and development, according to The Migration Observatory.

However, what is often misunderstood is the reason why so many migrants work here. It is not just that the UK is a great magnet for labour – it is that we need them and business welcomes them. For it is not just globalization which has encouraged the advanced economies to attract and facilitate the immigration of skilled overseas workers. Population ageing is also leading governments to consider migration as a solution to the demographic deficit and population decline.

At the turn of the 20th century one quarter of the world’s population lived in Europe, and provided the labour power house of the world economy. By the middle of this century Europe’s population will have fallen to below 10%, and will account for only some 6% of the world’s workers. In addition, Europe will steadily age, so that the ratio of workers to older dependents will double by the second half of the century. While migration will not prevent the ageing and population decline of Europe, including the UK, it will alleviate it.

Indeed, the major challenge facing the ageing high income countries is one of growing skills shortages. In almost half OECD countries, the retiring generations will be larger than the incoming ones from 2015, according to the 2010 World Migration Report. Rather than fixating on reducing migration, OECD countries should be concerned about the stiff competition they face from emerging economies in the battle for global skills.

And most severely hit will be Europe, including the UK, whose ability to attract skilled migrants will decline as it competes with North America, Oceania and Asia. While EU countries – and especially the UK – are the world’s leading destination for international students, we have not successfully capitalised on this through retaining the much needed skilled graduates within our economies. Indeed some projections indicate that without mass immigration into the EU of around 100 million there will be a need for a rise in retirement ages of 10 years by 2050 to compensate for the impact of demographic ageing on the work force. That is we shall all have to work much longer.

So what are the facts on the EU migrants in the UK which seem to have formed so great a part of the Brexit vote to leave? Firstly they are more likely to be of working age – nearly 70% compared with only half of the UK-born population – more likely to be employed, and more likely to have a degree or professional qualification. In other words contributing to the skilled workforce the UK dearly needs to attract and maintain.

A significant number of the businesses interviewed in a recent BIS survey stated that having access to migrant workers had led to improvements in business performance and productivity, and migrants were seen as essential to maintain and grow the business.

Migration also has an impact on the sustainability gap of public finances, increasing the number of potential tax payers, and in general immigrants in OECD countries pay as much in taxes as they take in benefits, according to the OECD 2013’s International Immigration Outlook. In particular, according to a report for the Centre for Research and Analysis of Migration, EU workers in the UK take less from the benefits system than UK born do, as they bring in education paid for by their native countries, and typically return before they require pension support.

Immigration also improves competitiveness and productivity. The growing social or ethnic diversity due to immigration encourages innovation and entrepreneurship, increases the size of the local economy, and increases trade and international linkages through diasporas. In 2013 the Office for Budget Responsibility calculated that increasing UK immigration to 300,000 annually would reduce UK government debt by almost a third – while stopping immigration would increase the debt by almost 50%.

Migration data is complex, however, and the national benefit to the economy and society are often clouded by local concerns, including those based on perception rather than experience. For example, while new EU migrants displace earlier EU migrants in the UK labour market, they do not displace UK born workers. Yet the perception of those voting for Brexit in the June referendum was different. Ironically the unemployment rate at the time was 4.9%, the lowest since 2005. (See figure 11 in The Office of National Statistics’ 2016 Labour Market Survey.)

Prior to Brexit some 29% of agricultural growers experienced problems recruiting enough labour and nearly half anticipated labour shortages by the end of the decade. As John Shropshire declared ‘… if there were controls on labour that made it difficult… one option would be to take these machines, the celery rigs all around us, to Poland and grow the product there.’ If you can move a whole celery farm out of the UK to find labour – I suppose you can move anything!

Sarah Harper is Director of the Oxford Institute of Population Ageing, and of the Clore Programme on Population-Environment Change. She is the author of How Population Change will Transform our World.

How politicians tried to sell Brexit to us