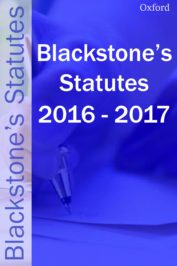 With a rock-solid reputation for accuracy, reliability, and authority, the series provides students with a careful selection of all the up-to-date materials needed for exams and course use.

In 2015, we asked some of our Blackstone’s Statutes series editors to select a piece of legislation from their subject area which had made a big impact; it resulted in an interesting selection so we decided to do the same thing this year. Discussed below are what our editors consider to be key pieces of legislation from their area of expertise. The main difference this time around has been that the UK has voted to leave the EU, which in turn has led to the future of some legislation being uncertain.

There are two sets of EU legislation which have had and might continue to have a very positive impact of the lives and rights of UK citizens who travel abroad. I’m not talking about those UK citizens who have taken advantage of the rights of free movement to live and work in another part of the EU, although the legislation does apply to them also, but those who travel temporarily be it on holiday, visiting family or on business.

Then allied to the above is the so-called Roaming Directive (which is in fact now governed by a Regulation 531/2012 (OJ 2012 L172)), which has required mobile phone service providers to incrementally reduce roaming tariffs and as from 15 June 2017 removed entirely.

To put this in context as to how this impacts on the lives of UK residents, the Office of National Statistics (ONS) gave the figure of UK residents visits abroad in 2013 as 58.5 million visits (for all reasons) with holidays accounting for over 37 million visits. Most of those will be by air travel and almost certainly most will be with a mobile phone.  The two pieces of legislation apply to protect and benefit the vast majority of those traveling. Now that the UK has voted to Brexit, these protections and benefits may change, and we could go back to the bad old days of no compensation for flight disruptions and extortionately high roaming tariffs.

P.S I claimed and have just received my €250 Compensation from Vueling Airline when they cancelled my flight to Zürich, so I know it works!

Last year when asked to contribute a blog piece, I chose to write about the European Communities Act 1972. I did so to explain some of the discontents that led to the proposal for a referendum on EU membership. Now that the referendum has been held with a vote to leave the EU, this year I would like to write about the European Communities Act 1972 – again!

One issue is whether the repeal of the Act will represent a final seal on the UK’s departure from the EU.

One might anticipate that this Act is now destined to be repealed. However, quite when and how it is repealed could be a matter of great constitutional significance. One issue is whether the repeal of the Act will represent a final seal on the UK’s departure from the EU and the first involvement of Parliament in the process of withdrawal. Some people argue that Parliament would need to sanction the very process of withdrawal under Article 50 of the Lisbon Treaty.

You may have read that a law firm, Mischon de Reya, have threatened legal action if an attempt is made to give notice under Article 50 without Parliamentary approval. This is on the basis that under the EU Referendum Act 2015 (now included in the book), the referendum’s status is advisory and cannot bind Parliament, which could in principle refuse to act on the referendum vote. Since around two thirds of MPs were in the ‘remain’ camp at the time of the referendum, this may not seem so far-fetched.

The political reality is somewhat different, however, and a refusal to sanction notice under Article 50 could provoke a constitutional crisis. Moreover, in the absence of a written constitution formally ruling on the matter, it is perfectly possible to argue that the triggering of Article 50 could be achieved by the exercise of the royal prerogative without Parliamentary approval. Constitutionally the UK Parliament has no formal role in treaty-making, as the power to do so is vested in the executive. If one takes this view, Parliament may have to wait to express its view at the point at which legislative change is needed – and that may come with the repeal of the European Communities Act 1972.

Robert G. Lee is Professor of Law and Director of the Centre for Legal Education and Research at Birmingham Law School. He is editor of Blackstone’s Statutes on Public Law & Human Rights 2016-2017.

There is a trend amongst developers to build properties that are interdependent (for example, blocks of flats), particularly in large cities. Two issues arise. First, buildings are likely to have ‘common parts’, which are not owned by an individual flat owner, for example, lifts, and these areas must be properly maintained. Second, is the need to ensure that the mutual obligations (for example, not to keep pets) be enforced not only between the original parties, but between successors in title.

An owner of property may either have a freehold interest (the best title in English law), or a leasehold interest. Generally purchasers and lenders prefer the former to the latter. In properties of multiple freehold ownership problems arise. Although mutual promises can be enforced between the original purchaser and seller, it is far more difficult for these promises (particularly those of a positive nature) to be enforced between subsequent purchasers. This means that enforcing obligations of maintenance of common parts of the building, and positive obligations between individual owners is almost impossible. Flats therefore tend to be sold as leasehold units, in order to overcome these difficulties.

The introduction of the Commonhold and Leasehold Reform Act in 2002 was meant to overcome these issues, allowing property to be divided into a number of freehold units, each sold to a different owner, and a further freehold comprising all the common parts of the property, and vested in a corporate body (the commonhold association). The association will have responsibility for the common parts, and membership of such is limited to the unit owners, who, by means of the association, control the communal parts of the building. Moreover, mutually enforceable obligations are embodied in a commonhold community statement, providing a ‘local law’ enforceable by and between unit holders.

With only 20 commonhold registrations in 10 years since 2004, developers appear more willing to rely on pre-existing methods probably due to the fact that sale of the freehold of the entire block is a source of revenue for them.

Meryl Thomas is a lecturer at Truman Bodden Law School in the Cayman Islands, and the editor of Blackstone’s Statutes on Property Law 2016-2017.

Matthew Dyson: The Offences Against the Person Act 1861

England and Wales is one of only a handful of jurisdictions among the economically developed countries of the world which is still without a Criminal Code. Even experts can struggle to find all the applicable legal rules, spread amongst hundreds of years of statutes and cases. Even other common law legal systems have codes, such as those in many Australian Jurisdictions and in New Zealand, or Model Codes, such as in the United States of America.

England might have developed a code, indeed, there were periods in the nineteenth century when it looked possible for English criminal law to be codified. Instead, lawyers decided to focus on improving accessibility by collating existing statutes, such as in the OAPA, the Malicious Damage Act and the Larceny Act; first in 1827/8 and then again in 1861. The OAPA still governs the core non-fatal offences against the person but its language is now somewhat antiquated and it no longer represents our attitude to certain harms (for instance, a pin-prick is a “wound” and thus theoretically still equivalent to “grievous bodily harm”).

The Law Commission has once more proposed significant reform of these offences, at last moving from consolidation of pre-1860s and 1820s law, to modern conceptions. This might then create another pocket of code-like rules, even if a comprehensive code is not achieved.

Since the 1830s there have been numerous attempts at a full Code, the most recent being 1989, all of which failed to get very far towards being promulgated. English criminal law is largely inaccessible and tweaked and changed annually. The best form of criminal law would be certain, clear, enduring and internally coherent: it is to be hoped another 150 years do not go by before English lawyers and politicians have the will to pass a full Criminal Code expressing these values.

Matthew Dyson is Fellow of Trinity College, Cambridge, and the editor of Blackstone’s Statutes on Criminal Law 2016-2017.

Designed specifically for students, Blackstone's Statutes lead the market in providing a carefully selected, regularly updated and well sourced collection of legislation for the core subjects and major options offered on a law syllabus.