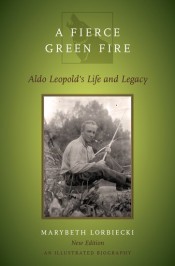 As my family gazed down on the stratified color bands of geological history in the Grand Canyon, snow and ice lined each ridge, and made each step on the path going down a dangerous adventure, highlighting the glorious drama of the miles-deep gorge. It was dizzying and frightening and awe-inspiring. In June 1915, the young forester Aldo Leopold took similar steps, but at that time, the rims on either side were strewn with tourist shops, lights, hucksters, and piles of garbage, with untreated sewage draining into the river.

Leopold and Forest Supervisor Don Johnston became comrades in envisioning a better path for the Canyon before it was even preserved as a park, creating the first working management plan to begin the dialog about how to best encourage people to enjoy the grandeur of this national and world treasure without despoiling it. Thankfully, President Woodrow Wilson established the National Park Service on 25 August 1916, and the Grand Canyon became our 15th park in 1919.

In 1965, fifty years after his father’s visit, Aldo’s son Luna took a 300-mile trip floating down the Colorado River and through the Canyon (one of the greatest trips of his life) to study and chart this living flow of water. It helped launch the hydrologist’s crusade to protect and free rivers in our country from unnecessary dams, work which has given health to the life blood of many of our national parks.

A few years earlier, President John F. Kennedy had asked Luna’s older brother, A. Starker Leopold, to serve on an advisory committee to study wildlife concerns in the parks. This was an issue that their conservationist father, Aldo, had first worked on in the Grand Canyon’s Kaibab Plateau. Starker became a leader in the efforts to have each park restore its ecosystem with the full range of species from its pre-settlement days. This way visitors could witness and save a sample of the place’s natural communities living on their own rightful turf. Starker presented the assessment summary: “Wildlife Problems in the National Parks,” which became known as the legendary and esteemed Leopold Report–the standard bearer in guiding the parks onward. Because of this vision, bison were successfully reintroduced into Theodore Roosevelt National Park and wolves back into Yellowstone, among many other triumphs.

For me, Glacier National Park was the crown jewel among jewels, a place that had inhabited my vacation hopes for 40 years, and strangely, my husband’s as well. Last summer we were finally able to go, taking our family. It did not disappoint. How could such grandeur, saved for generations, let anyone down? I am so grateful all of the visionaries (including the Leopolds), activists, park staff, presidents, politicians, and visitors who helped saved Glacier and all our other parks. It’s now our job to save them from being privatized and destroyed by oil exploration, mining, fracking, the ravages of climate change, and much more.

While at Glacier, we witnessed a forest fire (from a safe vantage point) one valley beyond the mountain ridge near us. It was frightening and magnificent. My daughter Mirjana took this photo with her phone from our campsite. We had been hiking and hurried back, unsure if we were in its path, watching the fire storm in the sky travel swifter than we did.

The former forest firefighter Aldo and his colleagues at the University of Wisconsin Madison and its Arboretum helped the nation learn about the role fire plays in the health of prairie and forest communities. Starker Leopold then brought this wisdom to the management of the national parks. Sadly, because of recent droughts and invasive infestations killing the trees, in addition to too much logging in the national forests, there are often too many and too intense of wildfires to maintain the balanced rhythms of old growth and new growth, fire ecology, and human communities. Here, too, we need care, discernment, and preventative action.

The beauty of the gifts of nature and posterity between and within our parks are vastly varied, from gorges to glacier, sand dunes to saltwater flats, everglades to coral beaches, freshwater mountain lakes to below sea level deserts. It takes a long time and many return trips to get to know and savor them. Each time I go through the gateway into one of our national parks, I am grateful for the Leopold family vision of saving within the parks portions of wilderness for our souls and for our wildlife. These are the areas I seek out, and I bring my children to them because I believe what Aldo wrote: “Perhaps every youth needs an occasional wilderness trip” (“Flambeau,” A Sand County Almanac). How well I have felt the truth of his insights as I hike or canoe or ride a horse in these outbacks:

“Wilderness areas are first of all a series of sanctuaries
for the primitive arts of wilderness travel,
especially canoeing and packing.
I suppose some will wish to debate whether it is important
to keep the primitive arts alive.
I shall not debate it.
Either you know it in your bones, or you are very, very old.” (“Wilderness,” SCA)

Thankfully, I am not yet that old, and I hope neither are you. Enjoy and take care of as many of our beautiful parks as you can, and give yourself the time and gift to see parts of them without a motor so you too can feel this joy in your bones.

Marybeth Lorbiecki has long been involved in the field of ecological ethics and conservation. Currently she is editor and the director of Interfaith Oceans (formerly Interfaith Ocean Ethics Campaign). She is the author of A Fierce Green Fire: Aldo Leopold’s Life and Legacy.