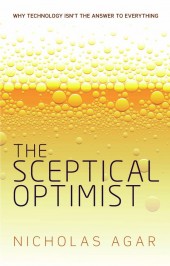 The Sceptical Optimist: Why technology isn't the answer to everything

Platform businesses are the current darlings of digital disruption. Uber, Airbnb, Taskrabbit, and their ilk dodge the overheads of traditional businesses. Their services are provided by private contractors and not by employees with all of their expensive entitlements. The platform business model has permitted Uber to rapidly acquire a market value in excess of the established corporate heavyweights 21st Century Fox and Ford. The news is not quite so good for Uber’s drivers – or, as Uber prefers – its “partners.” Investing in Uber may be a way to achieve great wealth. But partnering with it isn’t.

It’s pointless to demonize Uber. Indeed, we can be thankful for some of the things it has done. Uber has challenged complacent incumbents. It has brought cheaper rides and flexible employment. But these pluses don’t respond to the unfairness of Uber’s way of divvying up its wealth. Uber retains more than 20% of the money paid by passengers, leaving drivers to cover their expenses out of their end. It would be hard to imagine cardiac surgeons tolerating an arrangement in which a fifth of the value of their procedures went to the company providing what they would view as platform services.

One thing that Uber has taught us is that if a well-engineered platform business enters your industry and you confront it as an individual then you won’t do particularly well. The platform will suck up almost all of the additional wealth it helps to generate, leaving you with scraps. A problem is that unions, the historically most important instruments of worker protection, find themselves wrong-footed by the likes of Uber. Unions are a legacy of the Industrial Revolution purpose built for the factory floor. Platform businesses and the gig economy call for new ways to organize workers. They call for worker platforms that mirror key features of the platform businesses that they are built to confront. Uber came into existence as a website and an app. And this is how a ride-sharing worker platform can originate. Uber’s profits grow as its user network grows. Worker platforms gain bargaining power as their worker networks expand.

Platform businesses feature low barriers to entry. It’s easy and free to sign up to Uber. A ride-sharing worker platform should copy this feature. It should not charge membership dues. Like many platform businesses, it will originate as a website that invites membership very broadly. If the platform business it confronts operates internationally, then the membership of the worker platform must be international too. It shouldn’t begin in a particular city and then look to expand. There are Uber drivers in Rabat, Reno, Riyadh, and Rome. The Internet is there too. A worker platform that responds to Uber must be equally available to drivers in all of those places. There are many differences between drivers in Rabat, Reno, Riyadh, and Rome, but if they are partners of Uber, there is likely to a shared concern about how much of the money paid by passengers trickles down to them.

Platform businesses keep their overheads low. So should worker platforms. They might launch themselves on the crowdfunding site Kickstarter. There they would seek small sums of money sufficient to sustain a focused range of activities. Funding might come from angel investors. Here I mean genuinely “angel” investors, wealthy individuals worried about the effects of economic and technological dislocation on the bottom 90%, rather than those with narrow commercial interests in startup businesses. A worker platform represents the interests of workers most effectively by renouncing any interest in a piece of the action. There are many platform businesses seeking to monetize aspects of the way users interact with each other. The lack of any commercial interest should make the platform more appealing to workers. We expect politicians to be free of conflicting commercial interests. Workers should expect the same of a platform set up to represent them.

Low-overhead worker platforms must limit what they do. They cannot hope to do many of the things done by traditional unions. A ride-sharing worker platform will lack legal teams that can credibly threaten to take Uber to court. It cannot deal with individual complaints about ill treatment. Its central purpose is to get better deals for workers out of platform businesses.

Uber is certainly not the only ride-sharing business. It faces competition from Lyft in the US and BlaBlaCar in Europe, for example. Left to their own devices businesses tend to conform to the ecological principle of competitive exclusion – they find different niches in the ride-sharing economy. Lyft places greater emphasis on community engagement. Uber owns the luxury car market. The interests of workers are best served when Uber and Lyft compete directly. A direct competitor is the ideal recipient of an ill-served worker network.

A worker platform has low barriers to entry, but it requires some degree of commitment from its members. It shares this feature with platform businesses. You aren’t much use to Uber if you sign up, download its app, but never click on it. The ride-sharing worker platform needs something from its members too. Those members must show some interest in negotiations on their behalf. They must demonstrate some disposition to act on its advice and to switch partnership to new ride-sharing platform that offers workers a better deal. They should feel confident that many members of their worker platform will join them in making the switch. Those who negotiate for better deals need to credibly claim to Uber and competing businesses that drivers will accept their advice. Uber can’t really complain. The facility with which it sheds unwanted partners suggests a reciprocal freedom to find preferable ride-sharing platform businesses.

Membership of one worker platform does not preclude membership of others or indeed of a traditional union. In the gig economy workers are told that they must be prepared to take on many roles. They can drive for Uber in the morning and make deliveries for Taskrabbit in the evening. They would register with all of the worker platforms that represent their various gigs.

We’ve heard far too many stories about the billionaires made by the digital revolution. It’s time for a greater focus on how wealth can be spread around rather than allowed to pile up in the bank accounts of a few Internet-appointed masters of the universe.

Nicholas Agar is a Professor in Philosophy at Victoria University. He has spent much of his academic career writing about ethical and philosophical issues that arise in connection with new technologies. He is the author of The Sceptical Optimist: Why technology isn't the answer to everything.