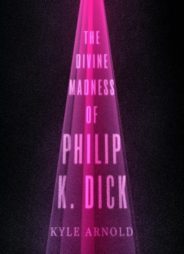 In February of 1974, Philip K. Dick’s life changed. While he was recovering from dental surgery, he claims, he had a spiritual epiphany. It started with a delivery from the local pharmacy. Three days after Dick’s surgery, an order of medications arrived in the hands of a stunning delivery woman. She wore a gold fish pendant that she said was a symbol of early Christianity. After taking the package, Dick saw a mysterious flash of pink light and collapsed onto his bed. A mystical contemplative, Dick supposed the pink light was a spiritual force activated by the fish pendant. As he lay in bed, visions of abstract paintings appeared, followed by philosophical ideas and engineering blueprints.

Over the next few months, the visions continued to develop. Dick saw streams of “shiny fire” moving through his environment and entering his body. He caught glimpses of a strange, humanoid being that appeared to blend in with his surroundings. He named it Zebra, and decided it was a benign deity that could “enter anything, animate or inanimate” and “take volitional control of causal processes- mimesis, mimicry, camouflage.” He saw a portal of pink light open, and out of it stepped a team of tiny three-eyed extraterrestrials who warned there was a cosmic conspiracy behind the assassinations of the Kennedys and Martin Luther King Jr. The aliens said the ancient Roman Empire, stealthily hidden over the centuries but still active, was responsible. Rome “had come forward, by insidious and sly degrees, under new names, hidden by the flak talk and phony obscurations, at last into our world again.” Nixon was a modern Caesar. Frightening scenes of ancient Rome showed up, superimposed over Dick’s suburban California neighborhood. Dick felt guided by helpful spirits, especially one known as “Thomas,” who he believed to be an ancient Christian revolutionary.

Eventually, the visions disappeared. But Dick’s fascination with what he called his “divine madness” remained. He was so obsessed that, over the next eight years of his life (Dick died in 1982), he produced an 8,000 page interpretation of the visions he titled his Exegesis. The bulk of it remains unpublished. Each page of the Exegesis proposes fresh ideas about the meaning of Dick’s divine madness. He suggests it may have been the work of KGB telepaths, an extraterrestrial satellite, a first century Christian named Thomas with whom he was in telepathic communication, a version of himself from an alternate dimension, or the spirit of his deceased twin sister contacting him from the spirit world. Another hypothesis Dick considered was that it was all a product of mental illness. While Dick was paranoid—likely because he used amphetamines to enhance his productivity—he knew his divine madness had a lot in common with mystical experiences that were considered bona fide, especially those of of the early Christian mystics known as Gnostics.

After 1974, most of Dick’s writing centered on these matters. While spirituality shows up in his earlier works, after 1974 his focus on it is laser-like. Dick’s 1978 novel VALIS combines science fiction with an autobiographical account of his divine madness. So does Radio Free Albemuth, an early draft of VALIS later reworked into a separate novel and published posthumously. The Divine Invasion, also written in the 1970s, is based on the notion of a God who, like Zebra, redeems the world by entering and mimicking it. The Transmigration of Timothy Archer, published posthumously, explores related aspects of Dick’s spiritual views in narrative form. Every novel Dick wrote after his visions was either about them or related themes.

It’s hard to say whether the impact of Dick’s divine madness on his writing career was beneficial or stultifying. In some respects it was limiting, insofar as he lost interest in writing about much else. On the other hand, VALIS is one of his best books. Furthermore, eight thousand pages of Exegesis in eight years is an impressive amount of work, despite the fact that it consists mostly of esoteric philosophical contemplation not intended for public consumption.

One change in Dick’s writing is that his post-1974 pieces are arguably more optimistic. Prior to Dick’s religious experience, his tales usually ended on a paranoid or ambiguous note—often punctuated by what I’ve called equivocal rescue. In some stories, Dick’s protagonist is saved by a deity or other powerful figure, only to discover it was an illusion. In others, an apparent rescue turns out to be a cruel trap. The world is not only cruel and untrustworthy, these stories seem to say, but also may be essentially meaningless. After 1974, Dick’s stories suggest the possibility of finding meaning. Dick wrote that one aspect of his divine madness was “paranoia turned inside out.” Where he had formerly perceived malign conspiracies, Dick now often saw divine conspiracies. As the end of his life approached, Philip K. Dick increasingly considered that the universe might be on our side.

Kyle Arnold is a psychologist at Coney Island Hospital and Clinical Assistant Professor of Psychiatry at SUNY Downstate Medical Center in Brooklyn, New York. He is the author of The Divine Madness of Philip K. Dick.