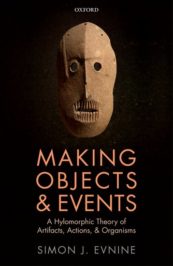 Making Objects and Events: A Hylomorphic Theory of Artifacts, Actions, and Organisms

The objects of mass production – screws, nails, cell phones, cars – are everywhere. They are, for the most part, humdrum and insignificant and beneath the notice of philosophers. But in fact, I shall suggest, they are deeply mysterious from an ontological point of view.

Here is something that actually happened this morning, I folded a piece of origami paper (square and uniformly coloured) in a complicated way, made a single cut across the result, and ended up with two paper decorations. As I made the cut, one of them fell to my left – decoration A. The other fell to my right – decoration B.

But suppose, hypothetically, that the piece of paper I grabbed had been put into the packet the other way round, rotated by 180˚. I would have grabbed the same piece and gone through the same process of folding and cutting. One decoration would have fallen to my left, one to my right. Would I have produced the same two decorations I in fact produced, namely A and B? And, supposing the answer to this is “yes” (as I think it is) would I have made A on the right and B on the left? Or would A still have been the one on the left, but now made out of the paper B was actually made out of (and vice versa)? What is so strange is that there is no determinate answer to these questions.

Many philosophers, following the lead of Saul Kripke, think that it is essential to an object’s being the very object that it is that it be made out of whatever matter it is actually made out of. On such a view, we can never truly say “that object might have been made out of different matter.” At most, another object just like it might have been made out of different matter. Let us call this the Necessity of Origin-as-Matter. If the Necessity of Origin-as-Matter is true, it is essential to A, the decoration that fell to my left, that it have been made out of the bit of the piece of paper it was actually made out of. So, when we consider the hypothetical alternative in which the paper I grab is rotated by 180˚, the decoration that falls to my left cannot be A – it is not made out of the paper which it is essential that A be made out of. In that hypothetical alternative, the decoration that falls to my right is made out of that bit of paper. That doesn’t yet establish that it is A, though, because there might be other things essential to being A that it lacks. But at least it meets the necessary condition for being A, so if we embrace the Necessity of Origin-as-Matter we might well want to say that in the hypothetical situation, I do make A and B, but that A ends up on my right and B on my left.

Should we accept the Necessity of Origin-as-Matter? It is a very commonly held principle but here is an example that I hope will give you pause. Suppose I am casting a small metal object, perhaps a silver bullet with which to kill a werewolf. I melt some silver in a pan, more than enough for the one bullet I am making, and pour off some into a bullet mold. I make the bullet out of a certain sub-portion of the molten silver. But surely I might have made the very same bullet if instead a different sub-portion of the silver had issued from the pan. Can I not truly say, holding up the bullet I have made: “This very bullet might have been made out of different silver”? It seems as if which silver happens to run out of the pan first is irrelevant to the identity of the bullet I make. What, then, does fix the identity of the bullet? How would things have to be different, in a hypothetical scenario, for us to say that in those circumstances, I would have made a numerically different bullet, albeit indistinguishable from the one I do make?

My own view is that what is essential to the bullet, and in general to the things we make, is not the identity of the matter they are made from, but the identity of the actions by which they are made. If the hypothetical bullet-making scenario involves the same action on my part, then it produces the same bullet, regardless of whether the silver is the same or not. And the reason for this is that an artifact like a bullet or a paper decoration isn’t just some silver or paper, arranged in a particular way. Such things are externalizations of the intentions and wills of their makers. What is important about them is their origins in the acts by which they are made, not their origins in the matter that makers resort to in order to express themselves.

But if this is correct, the case of the paper decorations poses a curious and interesting challenge. In that case, a single act of making is associated with two objects of the same kind. In the hypothetical alternative in which the paper is rotated, we surely have the same act as the act I actually performed. The only difference was the orientation of the piece of paper. But nothing about the act can help us answer whether, in the hypothetical case, I have made A on the right instead of on the left, or whether I have made A out of B’s actual paper, and B out of A’s. One might think that such cases will drive us towards accepting the Necessity of Origin-as-Matter. With it, we can at least say definitively, in the hypothetical case, that the decoration on my left is not A. Without it, we are unable to say definitively of either of the decorations that it is or is not A.

Strange as these consequences are, if we accept my view about artifacts as externalizations of their makers and reject the Necessity of Origin-as-Matter, I think we should embrace them enthusiastically. Think now, not of two paper decorations made by hand, but thousands of metal screws produced by a single human action in a factory. To insist of each such screw that it has its own essence, tied to the matter that it happens to be made out of, seems to make too much of it. With one pull of a lever, I produce a thousand screws. If, hypothetically, the metal had run out differently into the molds, I would have produced those very same thousand screws. But it is absurd to think we should expect to be able to say, of this hypothetical situation, that in it, the screw that ends up in slot 186 of the mold is the screw that actually ended up in slot 942 (even assuming that in the hypothetical situation, all and only the steel that actually went into slot 186 goes into slot 942). The thousand screws produced by my single action don’t have that much individuality to them! Rejecting the Necessity of Origin-as-Matter, I contend, gets us closer to understanding the nature of mass produced objects, strange and indeterminate as that nature may be.

Simon J. Evnine studied philosophy as a graduate student in the UK (at Bedford College London and University College London) and the USA. (at UCLA). After teaching for five years in the California State system, he came to the University of Miami. He has worked in a variety of areas and has previously published books on Donald Davidson on the relations between rationality and the self. He is author of Making Objects and Events: A Hylomorphic Theory of Artifacts, Actions, and Organisms (OUP, 2016).

What can we learn from meme culture?