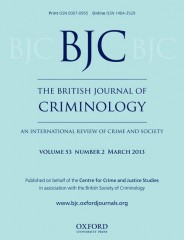 The British Journal of Criminology: An International Review of Crime and Society is one of the world's top criminology journals. It publishes work of the highest quality from around the world and across all areas of criminology.

In 2007, I published an article that sought to show in detail how the Iraqi economy had been opened up to allow the transformation of the economy and the routine corruption that enabled a range of private profit-making companies to exploit the post-invasion economy. The article argued that the illegal war of aggression waged by a ‘coalition’ headed by George Bush and Tony Blair was tied to a series of subsequent crimes of pillage and occupation. These included the transformation of the economy and the political system that was explicitly illegal under the terms of the Geneva and Hague Convention; and the mobilisation of political and economic instruments to ‘liberate’ the oil. The recently published Chilcot Report recognizes this corruption – and indeed UK joint legal responsibility for the corruption – and yet the evidence for it has been buried.

A key focus was what has subsequently been described by one British administrator as the “free money” that the country was awash with in the first year of occupation. Just weeks after the invasion, UN Security Council Resolution 1483 established the Development Fund for Iraq (DFI). The Resolution permitted the Coalition Provisional Authority (CPA) to spend this revenue on the reconstruction of the Iraqi economy, as long as it was “audited by independent public accountants approved by the International Advisory and Monitoring Board.”

DFI revenue was available to the CPA immediately, in the form of $100,000 bundles of $100 dollar bills, shrink wrapped in $1.6m ‘cashpaks.’ Pallets of cashpaks were flown into Baghdad direct from the US Federal Reserve Bank. The CPA held a proportion of this cash in the basement of its premises in Baghdad Republican Palace, famously in an unlocked room. One consequence of the use of cash payments and transfers was that the CPA transactions left no paper trail and therefore they remained relatively invisible.

At the time, a report by the Open Society Institute noted that around 85% of the contracts over $5 million paid for Iraqi oil revenue and disbursed by the CPA for ‘reconstruction’, went to US and UK firms. Just 2% of those contracts went to Iraqi firms. The Chilcot Report notes that by the end of the CPA’s first year of occupation, there were over 60 UK companies working in Iraq on contracts worth an estimated total of US$2.6 billion.

The UK government played a key role in the financial mechanisms that were so corrupted.

Showing a very explicit disdain for UN Security Council Resolution 1483, disbursal of DFI revenue was conducted with little or no adequate system of monitoring or accounting. The CPA kept no list of companies it issued contracts to. In addition to the discrepancies noted above, a report by the International Advisory and Monitoring Board (IMAB) found evidence of incomplete DFI accounting records; untimely recording, reporting, reconciliation and follow-up of spending by Iraqi ministries; incomplete records maintained by US agencies, including disbursements that were not recorded in the Iraqi budget; lack of documented justification for limited competition for contracts at the Iraqi ministries; possible misappropriation of oil revenues; and significant difficulties in ensuring completeness and accuracy of Iraqi budgets and controls over expenditures. Essentially the CPA enabled the reconstruction economy to exist without reference to international conventions of auditing and legal scrutiny, or its UN mandate.

The Chilcot Report is of course, primarily concerned with the role of the British government. Yet when it considers the role of British officials in facilitating the corruption of the reconstruction economy, it displays remarkable cunning. In the summary of the Report it notes: “The resolution’s [UNSCR 1483] designation of the US and UK as joint Occupying Powers did not reflect the reality of the Occupation. The UK contribution to the CPA’s effort was much smaller than that of the US and was particularly concerned with Basra.”

If this appears on the surface to be an unremarkable statement, it is drawing a remarkable conclusion: that the UK’s legal responsibility could not be really taken seriously since the UK’s role was “smaller.” Actually, the UK government played a key role in the financial mechanisms that were so corrupted.

Buried deeper in the Report there is evidence that a whole host of British officials and politicians were acutely aware of their responsibilities under international law, not least in relation to the Geneva and Hague conventions. The most senior British civil servant at the CPA, Jeremy Greenstock, recalls “a lot of cash was going round in suitcases…not all of which was accounted for.” It is an assertion that passes without comment in the Report. The next most senior British civil servant Andy Bearpark, when reflecting on the way the oil money was audited, said in his evidence “the IAMB, the International Accountability something or other… was the international body set up to monitor those funds, but that body never met until, I think, January 2004, by which time we had spent most of it.”

So it seems the British government cannot plausibly claim that it was unaware of its legal responsibility for the corruption of the reconstruction economy, or plausibly claim that it was powerless to do anything about it. Yet the Chilcot Report only mentions in passing the way that Iraqi oil money was disbursed in a way that fuelled endemic corruption. It recognises the corruption – and indeed UK joint legal responsibility for the corruption – without considering it to be particularly important. Although the evidence was available to the Iraq Inquiry it has simply been buried.

There can be no doubt, if Chilcot had followed the oil money he would have exposed how it was, quite literally, carried off in bags, under the watch of British government officials and British politicians.

David Whyte is Professor of Socio-legal Studies at the School of Law and Social Justice, University of Liverpool. He is the author of article The Crimes of Neo-Liberal Rule in Occupied Iraq, published in the British Journal of Criminology, which won the Leon Radzinowicz Prize for Criminology in 2008.