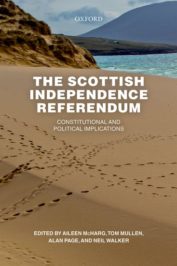 One of the consequences of the vote for ‘Brexit’ in the EU referendum on 23 June has been to focus renewed attention on the Scottish question. In this blog I want to look both forward, to the possibility of a second independence referendum, and backward, to compare the EU referendum with the Scottish independence referendum of 2014. The result of the latter, with 55% voting to remain within the UK and 45% to leave was simultaneously a rejection of independence by a decisive margin and an uncomfortably close call for supporters of the union and suggested that Scotland was a divided nation. Post-referendum events, particularly, the SNP’s near clean sweep of Scottish seats in the 2015 general election, suggested that the question of Scotland’s future in or outside the union had not been resolved. The even narrower margin of victory for ‘Brexit’ in the EU referendum has brought the Scottish question back to centre stage.

In the EU referendum, Scotland voted very differently from the rest of the UK. While England and Wales voted to leave the EU, 62% of Scottish voters voted to Remain (there was also a Remain majority in Northern Ireland). The possible consequences of that outcome had been well trailed in advance. The statement in the SNP manifesto for the 2016 Scottish elections that the Scottish Parliament should have the right to hold another independence referendum if there were a significant and material change in circumstances such as Scotland being taken out of the EU against its will was one of many to that effect. Since the result of the EU referendum result was announced, the former First Minister of Scotland, Alex Salmond has said that there must be a second independence referendum and current First Minister, Nicola Sturgeon has said a second independence referendum is “highly likely“.

Nevertheless, another independence referendum in the near future is not a foregone conclusion. There is no legal obligation to hold a referendum in any circumstances under the UK constitution; it has always been a matter of political judgment. The current SNP leadership is clearly wary of holding another referendum, as to lose two in quick succession might set back the cause of independence indefinitely. It has good cause to be concerned that, despite what Sturgeon has term the ‘democratic outrage’ of Scotland’s voters being dragged out of the EU against their will, they will not turn to independence in much greater numbers than in 2014. If the gloomy predictions from many quarters of the adverse economic and political consequences of Brexit look like they will be borne out, Scottish voters may judge that the risks of independence are not worth running in such difficult times. The current Scottish Government is unlikely to press strongly for another independence referendum unless it feels it can win it or it has been backed into a corner by events.

If it were to call for a second referendum there might also be legal and political obstacles. During the 2014 referendum campaign, the UK Government maintained that the Scottish Parliament had no legal power to hold a referendum. The Scottish Government disagreed, but the dispute was resolved politically by the October 2012 Edinburgh Agreement. It is unlikely that the UK Government would agree to a second independence referendum in the near future and there would be a high risk of legal challenge if the Scottish Parliament tried to proceed without authorisation by a UK statute. Nevertheless, a second referendum cannot be ruled given the major political upheaval that Brexit represents and the difficulty of predicting its consequences.

Space precludes a full comparison of the two referendums, so I will confine myself to a few issues. The most obvious comparison is that the EU referendum was more rancorous and divisive. Certainly, the Scottish independence referendum excited the passions of both campaigners and citizens and the turnout was considerably higher at 85% compared to 72%, the campaign was partisan and some participants, particularly in cyberspace, were rude, aggressive, or threatening. But, taking the campaigns as a whole, there was more unpleasantness generally and more disrespectful behaviour from senior politicians in the EU referendum. This may have an important but negative legacy. Despite its relative moderation, there is evidence that the independence referendum may have increased a sense of division within Scottish society. The divisions created by the EU referendum are likely to have deeper and more lasting consequences.

The overall quality of the debate and the level of reliable information provided to the public were also lower in the EU referendum. Whilst there was much ill-informed ranting in cyberspace, all the relevant issues were well aired in the Scottish referendum. This was aided by the fact that both sides published a full statement of their case. The Scottish Government published a 600 page white paper setting out its proposal for governing an independent country, and the UK Government produced its Scotland Analysis series of eighteen lengthy papers. We don’t know how many  citizens actually read these documents (although the white paper was downloaded many times) but the key facts and arguments – filtered through the media – emerged into public debate.

There was a clear contrast in the EU referendum. The tone of debate was particularly rancorous and there was a great deal more ‘misinformation’, making it difficult for citizens to make an informed judgment. Whilst, both sides were at fault, the principal blame for this lies with the leave campaign which persistently peddled untrue or misleading information (such as the claim that the UK sends £350 million to the EU each week), ignored inconvenient truths and made large, but rather vague, promises that could not be or were not likely to be fulfilled. Moreover, the leave campaign did not present anything resembling a clear manifesto outlining the future of the UK outside the EU.

The negative aspects of the EU referendum were most apparent in the discussion of immigration. This turned out to be both the most significant and the most divisive issue in the campaign and the one that leave campaigners treated as their most effective weapon for engaging and persuading voters. The issue of immigration had far less traction in Scotland.

Overall, the experience of these two, and of other, UK referendums suggest that they do not necessarily resolve the issues they were designed to address and sometimes have other negative consequences. . The 1975 referendum did successfully settle the European question for many years and the Scottish devolution referendum of 1997 demonstrated overwhelming popular support for devolution. By contrast, the 2014 referendum did not definitively settle the question of whether Scotland remains part of the UK nor has this one settled the question of the UK’s place in Europe and it threatens to further unsettle the union that is the UK. It may also leave a number of difficult legacies that will make it more difficult to govern the UK (or what is left of it), including increased racial and religious prejudice encourage by the anti-immigration rhetoric that was so prominent in the campaign, major political parties that have become dysfunctional and adverse effects on the peace process in Northern Ireland, all of which suggests that politicians should be cautious in the issues on which they decide to call referendums.