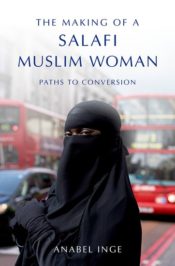 The Making of a Salafi Muslim Woman

I’ve often heard Muslims describe the holy month of Ramadan as an ‘iman [i.e. faith] boost’ – as though it were some kind of spiritual energy drink. A whole month, in other words, to recharge one’s spiritual batteries. In busy modern lives, Ramadan is an opportunity to focus on getting closer to God through religious practices – like praying, charitable giving, and avoiding alcohol – that may have been sidelined during the rest of the year.

Just like New Year’s resolutions, these determined efforts to ingrain virtuous habits and abandon objectionable ones often lose steam by the following month. Indeed, sometimes (as with the secular custom of ‘Dry [i.e. alcohol-free] January’) this is quite deliberate.

In other cases, however, Ramadan resolutions can usher in a rigorous programme of self-improvement that continues long after the month has passed. In fact, for some of the young Salafi Muslims I interviewed in London, it actually triggered a series of behavioural changes that led to fundamental shifts in identity and the acceptance of a highly conservative version of Islam.

Since the 1980s, Britain has been host to small but rapidly growing communities that follow Salafism (often called ‘Wahhabism’). These communities are disproportionately young and first-generation in membership, meaning that most adherents grew up in non-Salafi families, and became Salafi during their teens or twenties. For women, adopting a strict (or stricter) Islamic dress code is a demanding but a necessary ingredient of this transformation. Salafi teachings require women to wear long, loose-fitting gowns, and recommend face veils, too. This makes Salafi women particularly vulnerable to stereotyping and Islamophobic attacks in contemporary Western societies – as well as to criticism from their generally less conservative families.

Interviewing young Salafi women from various backgrounds, I learned that for several, it was Ramadan that triggered (or hastened) a dramatic and lasting identity transformation from non-observant Muslim to fully-covered Salafi. Every story was unique, but some patterns emerged. Whereas pre-Ramadan, a woman might feel embarrassed or fearful to go out in anything more than a simple headscarf, she would emerge from the holy month draped from head to toe in black, possibly covering even her face.

Of course, such strict dress codes are widely regarded by Muslims, as well as non-Muslims, to be excessive. Indeed, the perception of Salafis as ‘extremists’ is commonplace, and even some of my interviewees admitted that they’d initially seen Salafism as a ‘cult’ that imposed draconian restrictions on its followers. Salafis say that these sartorial rules are justified because they mirror those followed by the salaf, or first three generations of Muslims, which includes the Prophet Muhammad and his wives.

Salafis want to restore Islam to the ‘pure’ form of this early period by drawing on the holy texts – the Qur’an and ‘authentic’ hadith, or traditions of the Prophet – as literally and exclusively as possible. This leads to controversial and conservative teachings, such as separation from non-believers, wifely obedience, and strict gender segregation. Salafism is a global trend with significant diversity, especially in terms of attitudes towards political engagement, but my research focused on key UK Salafi groups that oppose Jihadism and all organised forms of political participation.

Saidah’s story is particularly striking. Growing up in a largely non-Muslim neighbourhood of south London, she often felt too self-conscious to wear any clothes that identified her as a Muslim. She covered her head only for occasional trips to the local Nigerian mosque with her parents.

As a teenager, she had started wearing a fashionable head wrap, but this decision had little to do with religion, and it did not stop her from going clubbing, dating, and even selling class A drugs. “I used to go and meet people to sell drugs to them,” she said, “and I used to wear a fashionable-looking headscarf just so I didn’t look like a suspect!”

When Ramadan came, she would make a special effort to wear Islamic dress, but it didn’t last. “Every Ramadan, you’d see me with a hijab [head covering] and abaya [loose-fitting robe]. Then, after Ramadan, it came off,” she said.

She repeated this on-off cycle for several years until Ramadan in 2010, when she was 21. That year, she decided to attend night prayers (tarawih) at the Salafi mosque in Brixton, south London. There, she bumped into some old school friends, many of whom were from non-Muslim families, and was astonished to find that they were now all observant Muslims.

“They inspired me to start practising,” she explained. “They said: ‘Why don’t you come to iftar [the breaking of the fast] at the mosque?’ I realised I didn’t have much excuse.”

The young women would go from mosque to mosque, attending Islamic study circles and praying together. Everyone except Saidah would be covered from head to toe in black, so her thoughts naturally turned to her own dress. “I used to wear all sorts of colours, with gems down my abayas, and I used to stick out like a sore thumb. I felt really uncomfortable.”

She asked her friends to take her to a shop to buy her first plain black abaya. Not long afterwards, she bought a niqab, too, and relished the anonymity it gave her when she realised that old acquaintances from her drug-dealing days did not recognise her in the street. “I fell in love with this piece of cloth that protected me from my past,” she said.

By the time Ramadan had ended, she had decided that “there was no way I could have gone back.” She said: “I was happy: I was around a group of people that was doing the same thing as me, and I was proud to say: ‘Yeah! I’m a Muslim!'” She continued to research Salafism and to wear her abaya and niqab, despite daily Islamophobic abuse in public places and her parents’ protests that “this is not Islam!”.

Saidah’s story, and many others I heard, highlights the intense social interaction that often occurs during Ramadan. In certain cases, this interaction could prompt or ease a young woman’s conversion to an austere brand of Islam that she might otherwise have avoided.

Of course, this pull factor is neither necessary nor sufficient for conversion to Salafism to occur. Many Muslims share similar intense social experiences during Ramadan, yet only a very small number find anything appealing in Salafism. For the women I interviewed, becoming Salafi was a gradual process related to a complex combination of pushes and pulls that was unique to each individual.

But it is clear that the holy month and the social activities it fosters – such as tarawih and iftar – had helped to create an environment in which conservative practices, such as the niqab, were judged by the women to be right and praiseworthy, rather than extreme and embarrassing. Ramadan gives them the social and spiritual ‘boost’ necessary to be more daring and consistent in their religious practices, despite the negative reactions these often provoke beyond Salafi spaces.

Anabel Inge completed her PhD at the Department of Theology and Religious Studies, King's College London, where she won the Arts and Humanities Research Council (AHRC) Doctoral Award and Walton Scholarship. She has taught courses on Islam and the Anthropology of Religion at SOAS (University of London) and King's College London. She is the author of The Making of a Salafi Muslim Woman.