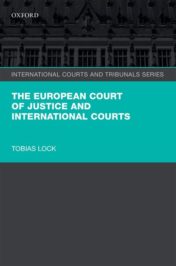 The European Court of Justice and International Courts

The economy and sovereignty are the two main themes dominating the political campaign preceding the EU Referendum that is taking place on 23 June. The sovereignty argument revolves around the notion of “taking back control from Brussels” and human rights are amongst the examples of control lost to the EU cited by leave campaigners. A similar connection between Brexit and human rights has also been made by those advocating a vote to remain in the EU. They warn that if the UK, a Conservative government would be free to trample on people’s human rights as it pleases.

But would a “leave” vote resulting in an eventual Brexit really have consequences for the level of human rights protection enjoyed by people living in the UK?

In order to answer this question it is important to avoid confusing the European Union (and its Court of Justice) with the European Convention on Human Rights (ECHR) and the European Court of Human Rights. The Convention is a treaty independent from the EU. It is binding on 47 countries (including all the EU’s 28 Member States) and provides for the protection of a number of human rights, such as the right to life; the right not to be subjected to torture; free speech; fair trial rights; the right to property; freedom of religion, and so on. Most of the rights in the ECHR are applicable within the UK’s legal order by virtue of the Human Rights Act (HRA) and not because they are part of EU law. Most of the human rights judgments considered as controversial (or even problematic) in the UK originated in the European Court of Human Rights, e.g. the judgments on prisoner voting; on the deportation of Abu Qatada to Jordan; or on whole-life sentences.

Even in the event of a Brexit and withdrawal from the EU, the UK will continue to be bound by the Convention and be subject to the jurisdiction of the European Court of Human Rights. In particular the vexed issue of prisoner voting is not going to go away because of it. In addition, a possible Brexit will not have any implications for the UK’s international obligations towards Ireland under the British-Irish Agreement, which underpins the Good Friday Agreement. That agreement places the UK under an international treaty obligation to “complete incorporation into Northern Ireland law of the European Convention on Human Rights”, which, for the reasons mentioned, would not be threatened by Brexit.

There are numerous EU Directives prohibiting discrimination on the basis of race, sex, sexual orientation, religion or belief, disability, and age

This doesn’t mean, of course, that the EU has nothing to do with human rights. It has a Charter of Fundamental Rights – in force since 2009 – which mirrors most of the rights found in the ECHR and includes a number of additional rights. The Charter is first and foremost binding on the EU and its institutions and thus constrains their ability to legislate or to conclude international agreements. These constraints came to the fore, for instance, in the case of Digital Rights Ireland in which the Court of Justice declared the EU’s Data Retention Directive invalid because it violated the right to private and family life and the right to data protection enshrined in the Charter. Another example is the case of Schrems where the Court of Justice held a decision by the European Commission, which said that a transfer of data from the EU to web servers in the US if a company had signed up to so-called “safe harbour principles”, to be invalid for violating these same rights.

Apart from constraining the EU and its institutions, the Charter is also binding on the EU Member States, but only “when they are implementing Union law”. One can distinguish two scenarios here. First, where a Member State authority acts on the basis of an EU obligation, e.g. it transposes an EU Directive into national law (e.g. in the UK the Working Time Directive resulted in the Working Time Regulations); or the police arrest a person on the basis of a European Arrest Warrant. Second, if a Member States (lawfully) derogates from one of its obligations under EU free movement law, e.g. when deporting a worker from another EU Member State because of severe crimes that person has committed. It should be noted in this regard that the UK has not achieved a complete opt-out from the Charter.

So what is the point of the Charter in practice given that the HRA already protects human rights in the UK? Given that the Charter is only applicable in limited circumstances, the protection it offers is weaker than that under the HRA. At the same time, if the Charter applies, it comes with the force of the primacy of EU law. This means that if, say, an Act of Parliament contradicted the rights guaranteed by the Charter, any UK court would be obliged not to apply that Act in the case before it. By contrast, under the HRA senior courts can make a declaration of incompatibility if there is a conflict between an Act of Parliament and the HRA. Such a declaration does not change the outcome of the case – the Act remains applicable – but merely opens up an expedited route for amending the Act.

Another field of human rights protection in which the EU has been active is anti-discrimination law. There are numerous EU Directives prohibiting discrimination (mainly in the workplace, but increasingly also in the supply of goods and services) on the basis of race, sex, sexual orientation, religion or belief, disability, and age. These have been incorporated into UK law by the Equality Act 2010.

Having outlined the main pillars of human rights protection flowing from EU membership, the question remains what would happen to human rights protection in the UK in the event of Brexit. As pointed out above, the UK’s obligations under the ECHR would not be affected. It is also clear that the Human Rights Act would continue to apply, unless it were repealed separately (and perhaps replaced by a British Bill of Rights). It seems equally clear that the Charter of Fundamental Rights would no longer be binding on the UK and could no longer be relied on before UK courts. In so far as the Charter mirrors the rights guaranteed in the ECHR, the only practical effect of this would be that courts would no longer be allowed to disapply a contravening Act of Parliament. Where the Charter provides for stronger protection than the ECHR (e.g. in the area of data protection or children’s rights), these rights would be lost even though they were of course only relevant in the UK where there was an “implementation” of EU law. The fate of anti-discrimination law is harder to predict. Its EU law basis would certainly disappear with a Brexit, but this would not change the existence of the Equality Act. If Parliament wanted to weaken anti-discrimination law in the event of Brexit, it would therefore have to amend this Act.

Dr Tobias Lock is a lecturer in EU Law and co-director of the Europa Institute at the University of Edinburgh. Follow him on twitter @tobiaslock. He is the author of The European Court of Justice and International Courts (OUP, 2015).

If you are interested in reading more about the potential impact of Brexit on UK law, we have freed up a selection of relevant OUP content and have put together a debate map which indexes information about and analysis of a Brexit’s legal consequences.