When travelling the globe, most intrepid adventurers and holiday-makers will encounter only minor health problems. But knowing and understanding possible hazards is fundamental to preventing them. When planning an adventure, people often seek novel experiences – and contemporary travel is able to take us (within just a few hours) from a relatively benign environment to a potentially life-threatening setting. Newcomers may have no idea of the hazards they face and inadvertently place themselves in danger.

In remote areas, access to sophisticated medical services is difficult or impossible, and the responsibility for dealing with medical problems falls on expedition members. The explorer’s worst nightmare may be to catch a dreadful tropical disease, or to be attacked by a ferocious wild animal. But for most expeditions the reality is more mundane. Stomach upsets, sprains, bruises, and insomnia are the most common problems. The risks of catching insect-borne diseases such as malaria or dengue, or being involved in a vehicle collision on the way to the expedition, are far greater than the more exotic dangers of the wilderness.

Adventure travel organizations send tens of thousands of people overseas each year, to areas that 20 years ago could only be reached by a well-equipped expedition. Given a (very) thick wallet, trips to both Poles, the summit of Everest, and even outer space can be purchased.

Age is no longer considered a bar to travel, with both healthy and less fit elderly travellers expecting to reach remote and often physically demanding destinations. An octogenarian has even reached the top of Everest! Attitudes to physical and mental disabilities have also changed enormously. A blind climber has summited Everest and limbless military veterans walked to the South Pole.

Undoubtedly, our thirst for adventure will always endure. On being asked why he wanted to climb Mount Everest, George Mallory (the Himalayan mountain climber who famously perished on the mountain in 1924) simply responded: “Because it is there.” This yearning holds just as true in the present day. Because of advances in technology and travel however, the distinction between an expedition and a recreational journey is no longer obvious – and the challenges of caring for people far from a base hospital remain.

So how worried should you be?

With the exception of extreme sporting activities, the risk for participants in a well-planned expedition is not that different from the risks faced during an active life at home. In the UK, typically between one and three deaths a year are linked to expedition travel. The aim of expedition medicine (known as wilderness medicine in North America) is to encourage adventure but, at the same time, to attempt to minimize the risk of trauma and disease. This is achieved by proper planning, preventive measures such as vaccinations, the acquisition of relevant medical skills, and sensible behaviour. When embarking on a trip, the best piece of advice we can give is to always remember the ‘Five Ps’:

If you’re planning your holidays, or even a full-blown expedition (and looking to prevent any poor performances!) – hover over the hazard signs below to find the dangers where you’re heading: 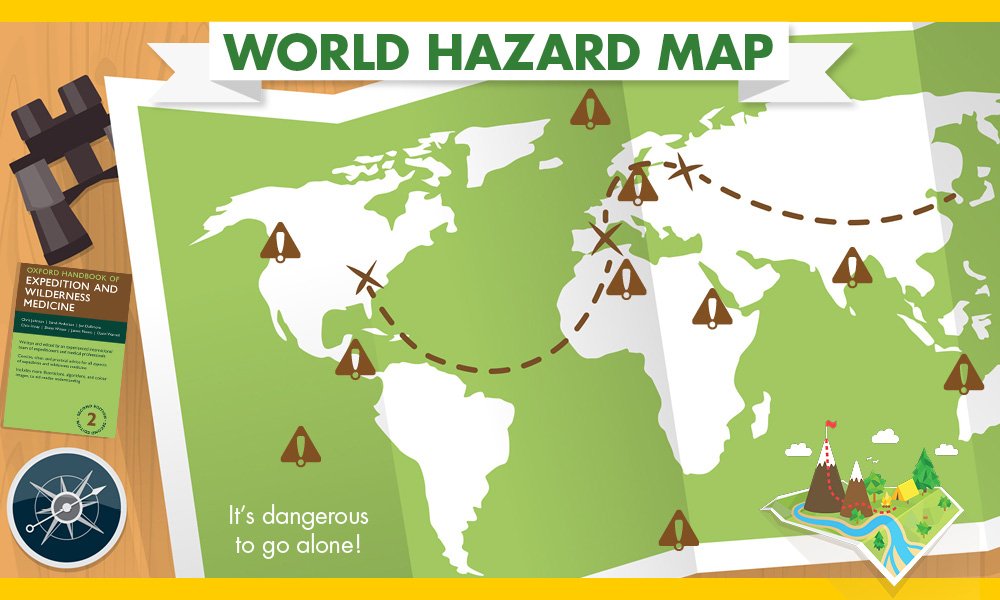 Dr Chris Johnson overwintered in Antarctica and completed a research degree in environmental physiology at a time when both travel and communications were far more tenuous than nowadays. This stimulated a lifelong interest in both travel and medicine in remote areas, and his journeys have included regular trips to Scandinavia, Iceland, Greenland, and northern Canada. He is a consultant anaesthetist and the author of the Oxford Handbook of Expedition and Wilderness Medicine. From the symptoms of infectious diseases, to what to pack in a medical kit - prepare for your next trip with our travel and expedition medicine page.

Why ‘tropical disease’ is a global problem

Five philosophers on the joys of walking