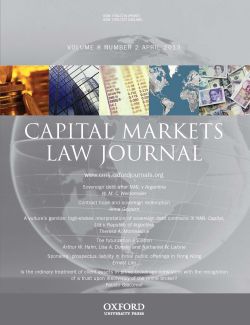 Capital Markets Law Journal is essential for all serious capital markets practitioners and for academics with an interest in this growing field around the world.

After the fall of the Berlin wall and before the collapse of Lehman, the political mood was such that banks were able to persuade the world that high levels of profit and remuneration were justified – the banks told the world that their industry had a key role in wealth-creation. They preached the efficiency of markets and the people listened.

However, when Lehman’s collapse in September 2008 precipitated a global financial crisis, banks were able to persuade governments the world over to spare them the harsh market discipline they had espoused as the engine of wealth creation – and had themselves visited on their customers. The huge cost of the banks’ bail-out then fell on the shoulders of bemused tax-payers. This outcome created an impression of hypocrisy; a sense that banks consumed rather than created wealth – and a sense of an account not yet settled as between taxpayer and banks. The political weather began to turn; electorates across the world were no longer prepared to accept the bankers’ arguments as being made in good faith; instead they saw those arguments as self-serving. The people stopped listening.

Thus was born an enduring political sense that the financial system is rigged in favour of the banks and against both “real” business and the people. It is of no account that respectable bodies of opinion observe that at least one cause of the financial crisis was US politicians and regulators expressly deciding, as a matter of settled policy, to persuade banks to lend to parts of the electorate that banks would not otherwise have lent to: the sub-prime mortgage market. Those voices do not carry the day.

By degrees, the political consensus has moved from “light touch” regulation and towards “heavier” regulation. This political climate exists because, in 2008, electorates were told the banks were too big to fail. In the eight years since, electorates have been paying up, but neither are the banks any smaller nor does bankers’ remuneration bear any relation to their own. They are therefore acutely aware that they will be called on as taxpayers to bail out banks in the future – and they don’t like it. Banks have not been able to alter this climate of opinion. Perhaps they are wise not to have tried too hard. Nobody’s listening anyway.

Instead, as the years since 2008 have passed, the abstract concept of a move from light to heavy regulation has grown a little more concrete. Today’s political climate demands a change of culture in the financial markets away from excess and irresponsibility and towards responsibility and accountability: prevention being better than cure.

And yet, adaption of behaviour to this new political climate was not the banks’ first reaction. Rather, from 2008 to 2013 they often remained defiant of criticism and, in part, resistant to regulatory action. Perhaps in response to the generalised nature of the anger directed towards them. In the years after 2008 the government demanded the banks rebuild their balance sheets, while at the same time demanding increased lending to SMEs – self-contradictory instructions. What’s more, in January 2011 the UK government imposed an £2.5bn annual levy on the banks’ balance sheets, a form of retrospective sin tax devised to sate the public sense of an account unsettled.

Sometimes, reasoned argument makes matters worse. In April 2011 the High Court rejected the British Bankers’ Association’s application for judicial review of the Financial Service Authority’s (FSA) redress mechanism for customers mis-sold PPI cover. The banks’ temerity in launching this legal challenge appears to have particularly enraged the Parliamentary Commission on Banking Standards (PCBS), established in July 2012 and which reported, in thundering terms, in its final report of June 2013 under the menacing title “Changing Banking for Good”. The temper of the times was such that in November 2013 the Entrepreneur in Residence at the Department of Business, Innovation and Skills published a report accusing the wicked banks of deliberately taking profitable SMEs into insolvency to enhance the banks’ short-term profits.

In September 2012 the then Chief Executive of the FSA produced a final report that concluded that banks had been conspiring to fix LIBOR. This scandal must have been a significant cause of the angry tone of the PCBS’s report eight months later. It is to this revelation that a report by New City Agenda in November 2014 on the culture of British retail banking attributes significance because it “forced many in the industry to face up to the fact that there would not be a rapid return to business as usual. Industry insiders started to accept fundamental change was needed”. Now, at last, bankers appear to agree with regulators and politicians that trust in the industry needs to be rebuilt by effecting a change in banking culture.

In September 2013 seven banks voluntarily established the Banking Standards Board, which published its inaugural report in May 2014. That report proposed establishing the Banking Standards Review Council (BSRC), a body, paid for by banks, which would have responsibility for establishing and ensuring compliance with a voluntary code of practice for all bankers operating in the UK.

The BSRC report was produced with the benefit of 200 responses to a consultative document from distinguished stakeholders in the banking industry. The thrust of the BSRC’s work will be to assist banks in achieving internal culture-change.

The premise of the BSRC’s programme – and New City Agenda’s supporting analysis – is that you “cannot regulate a culture into existence”. For that reason it describes itself as a “call to action” to the management of banks to embed management techniques that will deliver the culture change the political climate demands.

Will the public trust the BSB/BSRC to make change? On 31 December 2015 the FCA abandoned the Thematic Review of Banking Culture it had in its business plan for that the following year, leaving the issue of culture change to the BSB/BSRC – in other words to the banks themselves. The reaction of the public so far suggests a further collapse in trust in both regulator and banks. Will this really go away?

Richard Samuel is a barrister at 3 Hare Court, London. His article ‘Tools for changing banking culture: FCA are you listening? Why the FCA’s IRHP mass dispute resolution system has failed and what the FCA can do about it’ is published in Capital Markets Law Journal (Volume 11, Issue 2).