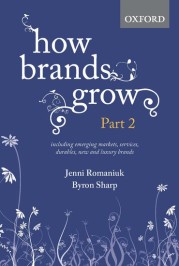 The sheer size and increasing wealth of the Chinese population makes China an attractive target market. There is no doubt that Chinese culture and history differs from the western world, but how do these differences translate into differences in Chinese buyer behaviour? And are there differences that should affect a brand’s growth strategy?

Given the importance of family, relationships, and social networks in the lives of the Chinese people, there is frequent speculation that WOM will have more influence on Chinese buyers. This can lead marketers to invest in more WOM-generation activities in China, at the expense of mass advertising. Two factors determine the usefulness of any media: reach and impact. WOM has limited reach, but might have more impact on those reached. We tackle the assumption that Chinese buyers are more affected by WOM than buyers in the United States.

Professor Robert East highlights that to determine the relative influence of any received brand advice, you need to know the starting point, i.e. how likely they were to buy the brand prior to receiving the WOM. Buyers vary in their brand purchase propensities—some get WOM about a brand they are already highly likely to buy, while others get WOM about a brand where they have little initial interest.

East and colleagues found WOM is more influential when it reaches people with less chance of buying the brand initially, and is less influential on those with a higher probability of buying a brand. This is important when researching WOM in China, and comparing results to other countries.

One way to see if WOM really has a greater influence on Chinese buyers, compared to those in the United States, is to look at people who have a similar benchmark probability in the same category. So we compared buyers in each country with a benchmark probability of 50% chance of buying the brand. The result showed no evidence that WOM is more influential on the Chinese. So it would be misguided to invest a lot in WOM generation activities in China thinking that it would have a substantially higher impact. It might be that WOM has greater reach, or cut through, and these are possible reasons for investing in WOM (they of course need similar testing), but we don’t see any evidence of WOM’s higher impact.

So what of other established knowledge about China, such as loyalty, brand competition, brand associations, attitudes and cross media exposure. Our evidence is that much of the empirical knowledge from western markets also holds in China. When it comes to the laws of growth, China is a different country, not a different planet!

This doesn’t mean that important differences between China and western markets don’t exist. It’s just that we need to be careful to disentangle real differences in buyers from transient differences in factors such as category experience/maturity. Otherwise, you risk being caught out when the market does mature, as is happening in many packaged goods categories in China.

On a final note, just because the strategic path to growth might be similar in China, it doesn’t mean marketers can just roll out a ‘one size fits all’ marketing plan. China does have some major differences that will influence tactical choices, as do India, Indonesia, Brazil, and other emerging markets. Whether your global brand is just getting started or is well established and looking to fight off competitors, prioritise smartly and avoid the common pitfalls of assuming there are big differences rather than relying on the evidence.

A version of this article originally appeared on the Oxford Australia blog.