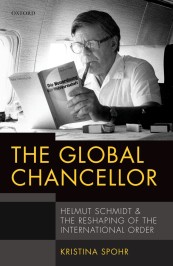 The Global Chancellor: Helmut Schmidt and the Reshaping of the International Order

Helmut Schmidt and Jimmy Carter never got on. Theirs was, in fact, one of the most explosive relationships in postwar, transatlantic history and it strained to the limit the bond between West Germany and America. The problems all started before Carter became president, when the German chancellor unwisely chose to meddle in American electoral politics.

Schmidt had developed a close personal rapport with President Gerald Ford (1974-6) and the two of them agreed on many policy issues – building up the G7 summit meetings to stabilize Western capitalism in the face of world economic crisis, and successfully concluding the Helsinki Conference on Security and Cooperation in Europe.

The chancellor spoke openly about their relationship to Newsweek in October 1976, three weeks before Americans went to the polls. “I have to abstain from any interference in your campaign,” he stressed, “but I really like your President, and I think he has done quite a bit of help in these past two years. I have been taking advice from him. This has been a two-way affair. But on the other hand, I am not going to say anything about Mr. Carter, neither positive nor negative, I have met him for one hour only”.

The headline “I like Ford” went around the world. Schmidt’s staff were obliged to send apologies to the Carter team, blaming the faux pas on an interview given very early in the morning when the chancellor wasn’t particularly careful about his words. In reality, however, Schmidt’s remarks reflected his true feelings. Speaking to British Prime Minister James Callaghan in May 1976 he had aired his “uncertainty” about how America would cope in superpower relations if “a very much unknown farmer governor” took over the White House.

Unfortunately for Schmidt, he did. And this compounded the diplomatic embarrassment. The new president never forgave Schmidt’s snub — nor did the chancellor change his opinions about the peanut farmer from Georgia.

After this disastrous start, the Schmidt-Carter relationship only went from bad to worse. One might have expected an American Democrat and German Social Democrat to have a similar view of the world but in fact, they clashed on almost every policy issue. Their disagreements were made worse by their temperaments: each being a perfectionist, obsessed with detail, and convinced that he knew best.

In the face of the world economic crisis, Schmidt was irritated by Carter’s obsession in 1977 with economic stimulus packages. The chancellor championed a policy of stability, on the German model (Modell Deutschland), favoring a neo-monetarist approach that promoted sustainable growth and reduced unemployment without fueling already rampant inflation.

On nuclear arms control, Schmidt was appalled that Carter tore up the Ford-Brezhnev agreements at Vladivostok (1974), pressing instead for “deep cuts”. This the Soviets flatly rejected in March 1977, forcing the superpowers to start negotiations again from scratch.

Friction was exacerbated by Carter’s Baptist passion for an idealist foreign policy, privileging human rights. This was at odds with Schmidt’s focus on realpolitik and the balance of power. Der Spiegel stated bluntly that Schmidt considered Carter “an unpredictable dilettante who tries to convert his private morality into world politics but is in reality incapable of fulfilling the role of leader of the West.” This became evident to the chancellor over what he considered Carter’s flip-flops and eventual cop-out in 1978 on whether to produce and deploy the so-called neutron bomb.

Their personal and policy differences came to a head in an amazing confrontation on the margins of the Venice G7 summit in June 1980. After the Soviet invasion of Afghanistan on Christmas 1979, Schmidt had gone along with Carter’s boycott of the Moscow Olympics but didn’t support economic sanctions against the USSR and wanted to keep open superpower arms control negotiations. He also insisted on sticking to his planned visit to the Kremlin in July. Carter’s anger with what he considered the chancellor’s double-dealing was expressed in a private letter that the White House then leaked to the press.

When the two leaders met in Venice, Schmidt blew his top. Together with their aides they faced off in a cramped, hot, little hotel room – knees almost touching. Carter called it an “unbelievable meeting” with Schmidt “ranting and raving” about the letter and about being treated like “the 51st state”. The chancellor was so incensed that he went over the whole history of their relationship. At one point he even exclaimed “Well, I don’t mind a fight”, to which Carter’s pugnacious national security advisor, Zbigniew Brzezinski retorted, “if a fight is necessary I am quite prepared not to shrink from a fight.”

The pyrotechnics helped clear the air a bit. But ultimately the chancellor could never entirely conceal his irritation with the president. American journalist Elizabeth Pond noted shortly after Venice that Schmidt, who “had kept his famous lip buttoned for well over a year on the subject of Jimmy Carter, pointed out that he had been used to thinking for himself and expressing his opinion for thirty years and that he didn’t propose to be instructed now by any newcomer with a lot less political experience.”

The Schmidt-Carter non-relationship was the great aberration from the chancellor’s modus operandi in international politics, which privileged the importance of reliable “political friendships.” His rapport with French President Valéry Giscard d’Estaing was the classic example, but his relations with Gerald Ford and Henry Kissinger were equally cordial and productive.

In the end, however, Schmidt and Carter did manage to transcend their personal differences. Both men believed firmly in the transatlantic partnership. And Schmidt had no doubt that Germany’s fate in the Cold War depended on America as its protector power (Schutzmacht). The NATO “dual-track” decision in December 1979 – making an arms control offer to the Soviets under the threat of deploying new Cruise and Pershing II missiles in Europe – helped keep the Atlantic alliance together at a crucial moment. Hammering out this agreement, in which the two leaders played a central role, was a truly significant achievement.

All the same, in 2016, the Schmidt-Carter story is perhaps a reminder that a foreigner, even an ally, should keep their mouth shut during a US presidential election campaign.

Kristina Spohr is associate professor of international history at the LSE. German-Finnish by birth, she studied at the University of East Anglia, Sciences Po Paris, and Cambridge University and also worked for a year in the NATO Secretary General’s Private Office in Brussels. Her publications include The Global Chancellor: Helmut Schmidt and the Reshaping of the International Order (2016); Germany and the Baltic Question after the Cold War – The Development of a New Ostpolitik, 1989-2000 (2004);  At the Crossroads of Past and Present — ‘Contemporary’ History and the Historical Discipline (co-editor, 2011); and Building Sustainable and Effective Capabilities: A Systemic Comparison of Professional and Conscript Forces (editor, 2004). Her TV credits as presenter of historical documentaries for the German station ZDF include the five-part Geheimnisse des Kalten Krieges (2015) and Helmut Schmidt (2016).