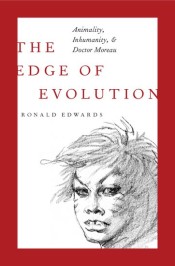 The Edge of Evolution: Animality, Inhumanity, and Doctor Moreau

How did it come to this? How was evolution transformed from a scientific principle of human-as-animal to a contentious policy battle concerning children’s education? From the mid-19th century to today, evolution has been in a huge tug-of-war as to what it meant and who, politically speaking, got to claim it. The early nineteenth-century establishment rejection of material thinking (French and revolutionary) laid the stage.

In the mid-1800s the powerful Anglican church underwent a generational shift and a certain adjustment relative to social organizing. Suffice to say that evolution was tamed and hitched to the wagon of British imperial power and to the progressives and radicals within that general cultural shadow as well. Evolutionary vocabulary concerning progress into ever-higher forms was embraced into the soft-religious, politically-empowered general society.

The most important book for content actually wasn’t Darwin’s but a fascinating volume called Vestiges of the Natural History of Creation by Robert Chambers. In 1859 and the 1860s, Darwin got folded into it via Huxley’s argument with Wilberforce, launching his name, title, and face into the symbolic leadership, specifically as an -ism for which multiple different worldviews and political priorities competed. The central figure in this process is Herbert Spencer, whose review of the Origin of Species was the primary reading (rather than the text itself), and whose terminology was vague and glowy enough to be appropriated. Today’s common view of him as a Social Darwinist obscures the history that during his time, his views were most often cited and lauded by progressives (Judson Minot Savage, Francis Power Cobbe, Auguste Comte) and have remained solidly present in that culture (in addition to the more familiar and later appropriation of his “survival of the fittest” by American industrialists). Just about everything currently called “Darwinist” in popular culture, positive or negative, is blatantly Spencerist.

By the 1880s, evolutionary vocabulary was massaged into various forms for a wide variety of British and American social positions and aims. When US policy attached itself to that imperial power in the 1880s, this ideology adopted evolution into American education in a muted, inspiring, glossy way, with much of its content obscured. It included safe little conundrums to wrestle over within the mainstream, not violating that larger imperial context, the most obvious being whether evolution was “for”/”about” progressive social enlightenment or capitalized profiteering.

In the mid-late 1800s, evangelical Christianity across what Colin Woodard calls Greater Appalachia was decentralized and extremely various. Its local units were split about 50-50 concerning whether evolution was the Devil or God’s work. In the 1890s, this changed dramatically with the Populist movement, when various leaders needed a unified fear-based, defiant rhetoric as an organizing device across multiple regions. Evolution served nicely toward that end–particularly regarding local vs. federal education. In the decades following the Civil War when federal schooling was instituted, including construction, teachers, and curricula, many of the regions in question saw federal policy as foreign invasion and cultural disruption. Evolution became an enemy symbol at the moment of Christian fundamentalism’s failure to exert political force. By 1900, if your evangelical church didn’t denounce it, you weren’t in the game anymore. The primary text of this movement, The Fundamentals, was written after this intellectual/political coup, in the 1910s.

Darwin’s, Huxley’s, or anyone else’s actual scientific work hardly meant a thing to this larger dialogue–the battle over whose societal plans got to be science-y and modern, and especially to claim to represent evolution-in-action. It’s a battle to exert control over what evolution, broadly speaking, means, and Darwin’s name is the figurehead for such control. Crucially, in what appeared to be mainstream “acceptance” of evolutionary theory, serious work on humans as animals was quelled. Darwin the scientist was a pioneer of studying cognition in non-humans and considering the evolutionary history of humans but that work is rarely taught. Physiological and medical work was the human priority and evolutionary content was permitted or valued only insofar as it fed into that. Everything else about being human was split across multiple topics, with evolution present in muted terms at most.

The New Synthesis view of natural selection and ecology (commonly found in textbooks) is more-or-less directly from Wallace, emphasizing environmental niche as the primary driver and the beauty of “matching” of form to habitat. It formally begins with the Hardy-Weinberg equilibrium (resolving a perceived Darwin-Mendel contradiction), continues through clinical applications like sickle-cell, is underpinned and “crowned” by the discovery of the double helix, and includes the explanation of speciation as adaptive radiation.

The historical problem with the New Synthesis is its distortion into a simplistic, dogmatic (if elegant) view of evolutionary change. It treats evolution as a sideline or specialty rather than a founding concept for biology. Therefore the major evolutionary disciplines (systematics and ecology) became arcane and isolated even within biology throughout the New Synthesis period, which is also when our current introductory curricula and textbooks were produced. Evolution was reduced to talking-points (“the fittest survive,” “species evolve to gain advantage in their environments”) among biologists and the general populace. New Synthesis unfortunately cemented an ostensible unity, coherence, and completeness into educational dogma rather than generated new questions. Today, the body of work called evolutionary theory is more disjointed than it should be, with ideas and terms hanging around unconsidered, or invoked in ways that hold more content than they should.

Meanwhile, throughout the 20th century, evangelical Christians became a marginalized and culturally alienated sector of American society–war-fodder, factory labor, debt serfs, and a radically pro-military and pro-business voting bloc. Views spread with migrations to Southern California, the foundation of the John Birch Society, the new political alliance between the Deep South and Greater Appalachia, and uneasy relations between black and white Baptist activism. Segments became militarized or paramilitarized by the 1930s and folded into various (and often rebellious) aspects of imperial policy by the 1970s. By the 1970s, fierce anti-evolutionary rhetoric, although practically devoid of content or even relevance, became infused with the force of anti-communism and patriotism, as well as real money from televangelism and church-centered community organizing and was now feared and courted as a genuine political force. The language of anti-establishment defiance has become patriotic, while retaining complete rejection of evolution as an atheist and immoral creed.

The content of evolutionary theory and even anything resembling theology are now completely out of the picture, providing only cherry-picked catch-phrases. These rhetorical battles over how to use the terms “evolution,” “Darwinism,” and “natural selection” are embedded semiotics for specific and concrete policy battles, and policies concerning whose kids get educated by whom. This is a classic example of religion providing the rhetoric and organizing mechanisms (including community identification) for a policy issue. There’s no need for “belief” or “faith” to be brought into the discussion at all.

The real issue at hand is the refusal to look at the human animal–the contention that is kept most silent of all. Both mainstream “tamed” evolution and radical/rural Christian activism deny talking bluntly about humans, such that the last time anyone really did so was Thomas Huxley’s Evolution and Ethics in the early 1890s. This doesn’t go back to Charles Darwin in 1859; it goes back to Linnaeus putting humans right into the Systema Naturae in 1740, smack into the primates, long before “evolution” was a glint in Erasmus Darwin’s eye. Whether it was the Anglican Church having a hairy cow over Lawrence or Chambers or Essays and Reviews, or the distortions into social progressivism or imperial profiteering, or the later appropriation-for-an-enemy by the Populist organizers, that’s the crux, the draw–the puncher: humans being animals. Mainstream and marginalized/radical alike, whether they claim to embrace evolution or claim to combat and defy it (with even less), they never address the questions that Linnaeus, La Mettrie, Lawrence, Darwin, and Huxley almost uniquely brought into the light.

If you mix it up in these policy battles, don’t overlook the fact that you’re acceding the framework of the argument to your opponent–and keep ourselves as humans in the closet.

A version of this article originally appeared on author Ronald Edward’s blog.

Featured image credit: Six editions of On the Origin of Species by Charles Darwin by Wellcome Images. CC BY 4.0 via Wikimedia Commons.

Ron Edwards holds a PhD in Zoology from University of Florida and is self-employed as an independent scholar and author. He most recently served as an Assistant Professor at DePaul University, and has also held appointments at University of Chicago and Valdosta State University. He blogs regularly at Man nor Beast. He is the author of The Edge of Evolution: Animality, Inhumanity, and Doctor Moreau.