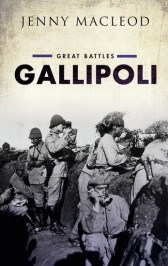 On 25 April 1916, 2,000 Australian and New Zealand troops marched through London towards a service at Westminster Abbey attended by the King and Queen. One of the soldiers later recalled the celebratory atmosphere of the day:

The thousands cheered us till they were hoarse; they broke through the cordon of police. Girls hugged us, and I don’t remember the number of kisses that we received. From the windows of the different buildings flowers were showered on us as well as cigarettes, flags, handkerchiefs, and other little articles. The Strand had the appearance of a carnival. (Quick March, April 1919, p. 38)

This was the first Anzac Day. A year earlier, Australian soldiers had been the first to land on the Gallipoli peninsula as part of an attempt by the combined forces of the British and French empires to invade the Ottoman Empire. Their unprecedented feat of arms had prompted breathless reporting about this ‘race of athletes’ from the war correspondent Ellis Ashmead Bartlett whose despatch told the world of how the Anzacs:

[W]aited neither for orders nor for the boats to reach the beach, but, springing out into the sea, they waded ashore and forming some sort of a rough line rushed straight on the flashes of the enemy’s rifles. Their magazines were not even charged. So they just went in with cold steel, and I believe I am right in saying that the first Ottoman Turk since the last Crusade received an Anglo-Saxon bayonet in him at 5 minutes after 5 a.m. on April. 25.

This moment formed the basis of the Anzac legend, an understanding of the events at Gallipoli which identified the military prowess of these soldiers as distinctively Australian. Repeated and analysed in historical writings, in poems and songs, plays and films, and above all through commemoration each year, the Anzac legend and Anzac Day have shaped Australian national identity.

What is interesting about the march through London is that the occasion highlighted the role of Australians and New Zealanders even though they formed a relatively minor part of the British forces of the Mediterranean Expeditionary Force. British and Irish men formed the numerically greater part of the force. There was scarcely a corner of the British Isles that did not send men to Gallipoli: from the Highlands of Scotland and rugged countryside of Northumberland, to the flat expanses of Lincolnshire and East Anglia or the green fields of Ireland; from the men of the king’s estate at Sandringham in Norfolk and the mounted yeomen of Berkshire, to the industrial heartlands of Glasgow and Lancashire.

In 1915 all of these men were citizens of the United Kingdom. By 1922, the Irish Free State was a separate country. The most important step towards Irish independence was the Easter Rising of 1916. Thus, at the very moment that the Anzacs were marching in London, across the Irish Sea an armed insurrection was underway in Dublin. The day before, Patrick Pearse, one of the leaders of the approximately 1600 rebels, had stood on the steps of the post office and read a proclamation that declared Ireland an independent republic. On 25 April 1916, the British armed response began to gear up. Amongst the British forces were Irishmen from the Dublin Fusiliers who succeeded in capturing a key newspaper building in the city, but who were also subject to an ambush on Parliament Street in which 23 men died.

These men might otherwise have also been marking the Gallipoli anniversary, for members of the regiment, professional soldiers recruited in Ireland, had also landed on the peninsula on 25 April 1915. Indeed, the Dublin and Munster Fusiliers landing at V beach was among the bloodiest and hardest fought battles of the day. Yet there are no reports of commemorative events anywhere in Ireland in 1916. This reflects a difficult situation, one that only grew over time. Irishmen who later wished to mark their participation in Gallipoli did so unobtrusively each year in April. Armistice Day was also marked by thousands of people, but it was fraught with controversy. As the fledgling nationalist government worked to establish the Irish Free State there was an understandable atmosphere of Anglophobia, and the sacrifice and slaughter of Irishmen in the service of the Crown was not a memory they cared to burnish.

Comparing the commemoration of the Gallipoli campaign in Britain, Ireland, Australia, and New Zealand across the century reveals the interchange between commemoration and national identity. The way in which the campaign and the contributions of these various national contingents were perceived and remembered took radically different trajectories. This was a moment when the nature of Britishness was in flux. An all-encompassing imperial identity began to atomize. At the outbreak of the war it was possible to consider oneself to be simultaneously British and Australian or British and Irish, but those identities were later rent asunder. In Australia it happened slowly and peacefully; in Ireland it happened rapidly and violently.

Jenny Macleod is a Senior Lecturer in 20th Century History at the University of Hull, having previously worked at the University of Edinburgh and King's College, London. A graduate of Edinburgh and Pembroke College, Cambridge. She is the co-founder of the International Society for First World War Studies and an associate editor of its journal, First World War Studies. Her latest book is Gallipoli (OUP, 2015).

What does the history of Victory Day tell us about Russia’s national identity?