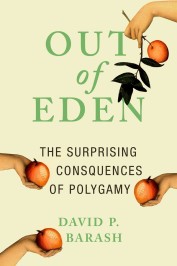 Out of Eden: The Surprising Consequences of Polygamy

In today’s world where the majority of developed countries tend to favor monogamous relationships, what should we think about polygamy? David P. Barash, author of Out of Eden: The Surprising Consequences of Polygamy, reveals a few facts about polygamy that’ll give you some food for thought.

Polygyny is when a male maintains a “harem” of wives with whom he mates and typically produces children. Polyandry, on the other hand, is the mirror image of polygyny but with a woman maintaining a harem of males. Most people tend to associate the terms polygyny and polygamy as one in the same, mainly because of its overt occurrence in most social traditions. Polygyny is the more obvious and well-known phenomenon, but the evidence is quite clear that people practice polyandry, too; it’s just that women are more subtle about it!

In polygynous species, males are typically larger than females.

Depending on the degree to which a species is polygynous, male-to-male competition can be fierce, with physical altercations usually determining the dominant male and, thus, the size of his harem. Females, on the other hand, are able to achieve reproductive success without being as overtly competitive as men; they do not need to fight other females in the same way that males do. When considering monogamous species, males and females are pretty much physically matched. (Which provides yet more evidence that people are not “naturally” monogamous.)

Infanticide happens in some polygynous species.

Like with the Indian langur monkey (a polygynous species), when a male is overthrown as the dominant harem master, the newly ascended male will proceed to kill the still-nursing infants. Afterwards, the male mates with the bereaved mothers, which overall increases his own reproductive output while decreasing his predecessor’s. Sadly, there appears to be a parallel in our own species, since nonbiological parents (especially men) constitute a genuine risk factor for at least some step-children.

The Coolidge effect states that males ejaculate more sperm when with a new partner.

Turns out, roosters do in fact ejaculate greater quantities of sperm when paired with a new hen rather than a familiar one, the findings of which were compiled into a report titled “Sophisticated Sperm Allocation in Male Fowl.” However, the effect can also be applied to a large number of birds and mammals, including human males.

The polygyny threshold model explains why females would actively choose a polygynous mate.

The polygyny threshold is the difference in resources between two competing males—one a bachelor and the other already mated— to make it worthwhile for a female to choose the latter. The underlying assumption is that from the female’s viewpoint, despite getting the divided attention of the already-mated male, it may still be more advantageous to mate with the one that is “wealthier”. On the other hand, evidence from anthropology shows that in most cases, women who are part of a harem are somewhat less successful, reproductively, than those who are monogamously mated.

Monogamy is actually more helpful to men than to women.

In a polygynous society, a relatively small number of men get to marry and produce offspring; most are left out, ending up non-reproductive bachelors. Monogamy is thus a democratizing institution, giving men who likely would be excluded the opportunity to marry.

The difference in sizes between genders is indicative of polygamous tendencies; men are generally 20% larger than women, which is within the range of other, moderately polygynous species. However, that isn’t to say humans aren’t meant to be monogamous either; in fact, we’re predisposed to pair-bonding. What’s most notable about humans is that we possess the unique ability to define ourselves by how we choose to live, and that despite our predispositions we can choose to enable or suppress them.

It’s important for people to understand the “natural” tendency to be interested in having multiple sexual partners.

Whether or not one chooses to indulge this tendency, it’s important to know that it exists. This protects people from being blind-sided by their own biology, or from misinterpreting the inclinations of one’s partner. Thus, its healthy and normal to be sexually tempted, and doesn’t necessarily mean that you don’t love your partner, or that your partner doesn’t love you, or that either of you is an evil sinner, or that either of you “just isn’t cut out for monogamy.” No one is “cut out for monogamy.” But everyone is free to decide how to live his or her life … and we are all the more free when we understand our biology.

Human polygamy has a number of surprising results.

For example, it makes men much more violent than women, women more parentally inclined than men, and it may even have consequences for male-female differences in “genius,” as well as helping explain the adaptive value of homosexuality. It could even predispose human beings to monotheism.

Headline Image: Image by Keoni Cabral. CC BY 2.0 via Flickr.

David P. Barash is an evolutionary biologist and professor of psychology at the University of Washington. He has specialized in the ecology and evolution of animal and human social behavior, has written more than 250 peer-reviewed articles and 38 books, plus numerous op-eds in the Los Angeles Times, The New York Times, as well as regular pieces in aeon, Nautilus, and The Chronicle of Higher Education, among others. He is the author of Homo Mysterious (OUP, 2012), Buddhist Biology (OUP, 2013) and Out of Eden (OUP, 2016).