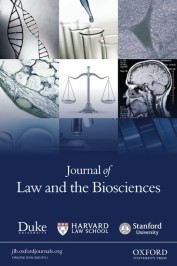 Journal of Law and the Biosciences

The Journal of Law and the Biosciences (JLB) is the first fully Open Access peer-reviewed legal journal focused on the advances at the intersection of law and the biosciences. The Journal contains original and response articles, essays, and commentaries on a wide range of topics, including bioethics, neuroethics, genetics, reproductive technologies, stem cells, enhancement, patent law, and food and drug regulation.

The birth of a healthy child in Sweden in October, 2014 after a uterus transplant from a living donor marked the advent of a new technique to help women with absent or non-functional uteruses to bear genetic offspring. The Cleveland Clinic has now led American doctors into this space, performing the first US uterine transplant in February, 2016 as part of an Institutional Review Board (IRB)-approved series of ten transplants using cadaveric donors. Dallas and Boston medical centers have also been approved for this program, as will other programs as progress continues. An estimate of 50,000 American women are potential clients.

The path to womb transplants, however, will not be easy. On 7 March, the Cleveland Clinic celebrated its transplant with a media announcement full of joy and celebration. Two days later in a decidedly different key, the Clinic informed the world that the organ was surgically removed because the recipient had “suddenly developed a serious complication.” One can only imagine the disappointment of the patient and medical team, who had smiled so happily in media coverage. Of course, early failure is not surprising with innovative surgery, and no doubt the Cleveland clinic will proceed with other patients. The case is a reminder that the road to success is long, and initial steps should be closely monitored by IRBs, as is occurring in Cleveland, Sweden, and elsewhere.

As with other reproductive innovations, ethical, legal, and medical strands – in addition to safety and efficacy – interweave this new option. Patients who opt for this procedure are not always women who simply who want the pregnancy experience. In most of the world, women who lack a functioning uterus have no alternative because surrogacy is forbidden (Turkey, Saudi Arabia, and France), or a ban on paid surrogacy puts that option out of reach (UK, Sweden, and Spain). A subset of women in those countries may be willing to travel abroad to find a surrogate. Surrogacy tourist options, however, are now constricted as India and Thailand have closed their borders to foreign surrogacy clients. Whether other countries (Nepal, Kazakhstan, and the Philippines) will fill the gap is still unknown. For many would-be tourists, safe and effective uterus transplant may be an appealing alternative.

Transplant will also be an attractive option even where paid surrogacy is legally available, as it is in several US states. The Cleveland transplant patient, a 26 year old woman from Texas, if she had chosen, would have been able to enter into a legally binding surrogacy agreement with advance certification of parentage. Surrogacy, however, has its own problems, including outsourcing the burden of pregnancy to a paid stranger. In some countries, confinement in surrogate compounds and exploitation of poor women has occurred. While these dangers are less likely in the United States, women may still be uncomfortable with paying another woman, over whom she will have limited control during the pregnancy, to have her child. Uterus transplant could be an attractive substitute for those with moral or pragmatic objections to surrogacy.

Even safe and effective uterus transplant will be fraught. The question of donor is a key inflection point. Living donors (who cannot be paid) are likely to be close relatives (the donor in the first Swedish case was the recipient’s mother) or friends. And donating will be a substantial sacrifice, usually entailing a nine hour operation with many post-operative risks and burdens. Cadaveric organs are more easily retrieved, though it adds another level of emotional complexity to a decedent family’s consent. The transplant operation for the recipient will also be onerous—the Cleveland case took nine hours even with top vascular surgeons doing the intricate reattachment of veins and arteries.

The recipient, who will have undergone an IVF cycle and produced at least six frozen embryos before the transplant, must wait a year after the transplant before embryo transfer, and perhaps another year for the birth of the child. Failure to implant or miscarriage will make it all for naught, as will rejection of the graft. If pregnancy occurs, the woman might feel movement of the fetus but nerves from the uterus are not reconnected so some of the gestational experience will be missing. Daily immunosuppression can cause chronic kidney disease or skin cancer within a year or two of transplant. The effects of immunosuppression on the children born after transplant are also important concerns. However, data from offspring of kidney recipients suggests that those effects are tolerable. Finally, when a recipient’s child-bearing plans are done, she will have to undergo a hysterectomy to remove the foreign uterus.

Women seeking a uterus should undergo an elaborate screening and consent process to assure that they will be clear-sighted about the risks, benefits, and alternatives (surrogacy, adoption, and childlessness). Although not life-saving, uterus transplants joins the group of vascularized composite allografts (VCAs) that correct or ameliorate serious non-life threatening conditions, such as hand, face, larynx, and penis transplants. True, some requests for vascularized composite allogenic transplants are more compelling than others. Yet having a child of one’s own (in both the genetic and gestational sense) could be an important human experience, and arguably as important as other VCAs.

Viewed more broadly, uterus transplant may be the first reproductive technology involving a third party in which the recipient bears most of the physical and psychological burden rather than shifting to another woman, as occurs with gestational surrogacy and egg donation. At the present time, uterus transplant requires more research and fine-tuning. If uterus transplants achieve the medical status of other solid organ transplants, it may provide an opportunity for women who otherwise would be unable to have a child of their own. If only it were not so complicated and expensive.

John A. Robertson holds the Vinson and Elkins Chair at The University of Texas School of Law at Austin. He has written and lectured widely on law and bioethical issues. He is the author of two books in bioethics and numerous articles on reproductive rights, genetics, organ transplantation, and human experimentation. He has served on or been a consultant to many national bioethics advisory bodies, and is currently Chair of the Ethics Committee of the American Society for Reproductive Medicine. He is also the author of, "Other Women’s Wombs: Uterus Transplants and Gestational Surrogacy," publishing soon in the Journal of Law and the Biosciences.