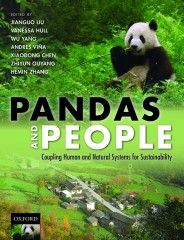 Pandas and People : Coupling Human and Natural Systems for Sustainability

Amid failures in saving numerous wildlife species worldwide, there is an encouraging success—decades of panda habitat degradation have been transformed into a remarkable recovery.

The success is taking place in Wolong Nature Reserve of China—home to endangered giant pandas and more than 5,000 residents who share a 200,000-ha mountainous area. It is also occurring in many of the other 66 nature reserves and non-reserve areas across southwestern China.

Giant pandas are a global conservation icon and have attracted fascination from humans for centuries. Protecting pandas also provides habitat to many other species that share the same home. Some areas of panda habitat are within global Biodiversity Hotspots. For example, Qionglai Mountains (9,000 km2) alone support 350 breeding bird species (more than Canada) and over 100 species of mammals (twice the number in the UK).

In the wild, bamboo makes up more than 99% of the panda’s diet. Due to human impacts from activities such as timber harvesting and fuelwood collection, however, the geographic range of the panda has shrunk drastically. As a result, pandas are now only in bamboo forests in southwestern China.

The Chinese government began to protect pandas in the early 1960s. However, panda habitat, even in the ‘flagship’ Wolong Nature Reserve, continued to degrade until the early 2000s when the government began to implement conservation policies that provide substantial subsidies to local residents. The conservation effort has experienced many surprises. One surprise is policies with good intentions sometimes backfire. For example, giving households subsidies to monitor forests for excessive fuelwood collection inspired many households to split into smaller ones, resulting in a higher demand for fuelwood. Because small households were given the same subsidies as large households, a household of four people could double its subsidy after splitting into two households.

Behind the successes and surprises, there are complex human-nature interactions. Untangling the complexity needs a system approach that views humans and nature as an integrated entity, or a coupled human and natural system. It integrates many natural and social science disciplines from traditional ecological approaches (e.g. fieldwork) to socioeconomic studies (e.g. surveying the people and understanding how they make their decisions).

Many findings and methods developed in studies on pandas and people hold universal truths. In the past, human population size was often used as a proxy for human impacts on planet Earth. In Wolong, researchers found an even bigger threat: household proliferation—household numbers grew much faster than population size. This prompted a global study, which revealed household proliferation is common worldwide. It happens because of increased divorces, dissolution of multigeneration families, unintended policies such as the subsidy policy mentioned above, and so on.

Even a remote corner of the world like Wolong is now globally connected, both socioeconomically and environmentally. This phenomenon led to the development of a new concept to understand the interconnected world: telecoupling—socioeconomic and environmental interactions over distances. The telecoupling framework is more comprehensive than traditional approaches that usually address environmental or socioeconomic connections separately, or focus on what’s happening within an area. It is being applied to issues all over the world, from trading of goods and products such as food, energy, and ecosystem services to tourism, information dissemination, water transfer, and species invasion.

Despite habitat recovery and enormous successes in captive breeding, pandas still face many threats such as climate change and habitat fragmentation. More comprehensive analyses of pandas-people interactions can help better address these threats.

Research on pandas and people not only reflects on many lessons learned, but also points to future directions. The emerging successes in recovering panda habitat hopefully hold more promise for the panda and other wildlife around the world.

Jianguo (Jack) Liu holds the Rachel Carson Chair in Sustainability at Michigan State University and serves as director of the Center for Systems Integration and Sustainability. His broad interests include the integration of ecology with social sciences. He is the lead editor of Pandas and People: Coupling Human and Natural Systems for Sustainability (OUP 2016).