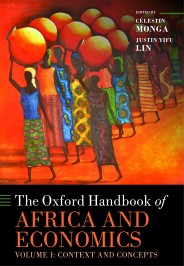 The Oxford Handbook of Africa and Economics Volumes 1 and 2

A few years ago when the Greek economic and financial crisis was rocketing markets around the globe and seemed to justify the bashing of that “poor country of tax cheaters” to the point of threatening the majestic European Union project and dishonouring an entire continent, French philologist Jacqueline de Romilly reminded the world of some of the things owed to Greece: the invention of democracy, philosophy, and tragedy. The same applies to Africa: here is a continent whose image has been so poor for so long that even when it accidentally becomes the subject of “good” news, the information is often given superficially, if not in caricatures. Despite recent improvement in its coverage, the continent is rarely presented as a true contributor to human thought. A good illustration of the hysteresis of its poor image can be seen in comparative advertisements: in some global publicity campaigns, New York is typically shown to be home to the grandiose Empire State building or the Statue of Liberty; Paris is naturally depicted as the place when the human mind created the Eiffel Tower; London is represented with majestic Big Ben; African cities or countries are celebrated for their terrifying roaring lions, belligerent leopards, and inelegant chimpanzees…

In an era where legitimation and respect are correlated with economic performance measured by income, Africa is often dismissed as the region of the world whose contributions to the global intellectual production is not obvious. Perceptions of the continent generally fall into two broad categories: the “angry” and often conservative view of those who lament the disappointments of economic failure, and who point to the “astonishing outpouring of generosity” (mainly from foreign aid), which has not propelled Africa into greatness; and the miserabilist and often “progressive” view of those who tend to see the continent as a “victim of history.”

Such generalizations about a continent of 54 very diverse countries are bound to be distortions. Nothing bad occurring in Africa today has not been experienced—often in worse forms—in other regions of the world, and overcome. If there is an African exceptionalism, it is primarily in the resilience of a part of the world that has produced Nelson Mandela, 22 Nobel laureates and 7 women Presidents among many other achievements despite extreme duress.

Traditional analyses also ignore the large intellectual debt that the world owes to Africa, and the continent’s enduring influence on some of the world’s leading economists. Joseph Stiglitz, who pioneered Information Economics and ignited fundamental change in the prevailing paradigm within economics, acknowledges the crucial importance of Africa in opening his mind to fruitful ways of looking at economic issues. In his 2001 Nobel lecture he explained how his long stay at the Nairobi Institute of Development Studies (Kenya) in 1969 “made an indelible impression” on him. Seeing the massive unemployment that characterized African cities, and unemployment that could not be explained either by unions or minimum wage laws, he was forced to challenge many of the key assumptions that went into the dominant economic model of competitive equilibrium, and to start his work on the economics of information asymmetry.

Although it may not be explicitly acknowledged, Africa’s influence pervades the work of other Nobel laureates, James Tobin and Peter A. Diamond, who also happened to be pensioners at the Nairobi Institute of Development Studies in the late 1960s. Africa’s intellectual influence is discernible in the works of other leading economists. Besides several future Nobel laureates, the Nairobi Institute of Development Studies also hosted in the 1960s John Harris and Michael Todaro (the celebrated authors of the Harris–Todaro Model), Gary Fields, and a few others who subsequently became household names in the field of development economics.

Of course, not everyone went to Nairobi. Still, African economies have inspired a large number of influential economists to produce some of their best work. Paul Collier, who has become himself a star in the discipline with his work on Africa, notes that “Professor A. Deaton (Princeton) based the prestigious Oxford Clarendon Lectures (1991) on two data sets which best tested his propositions on the central topic of consumption behavior; one was from the United States, the other from Côte d’Ivoire. This is indeed part of a wider phenomenon, the upgrading of the economics of development.”

In sum, mainstream macroeconomics has been enriched by cutting-edge work carried out on Africa on issues as diverse as the modeling of small open economies or the theory of repressed inflation. Likewise, mainstream microeconomics has benefited enormously from the study of factor markets, product markets, and household economics across the continent of Africa. Yet, despite its breadth and depth, Africa’s contribution to economics remains largely untraceable. A good indication of this trend is the fact that for about eight decades (from 1900 to 1981), the total number of Africa-related documents (journal articles, books, collective volume articles, dissertations, working papers, and book reviews from the Journal of Economic Literature published in the EconLit (which includes references to articles in economics journals from all over the world, most of which are in English or with English summaries) was insignificant, at less than 100 per year. It tripled to 310 in 1984 and reached 1050 in 1998 and 2441 in 2013. While this growth has been exponential in the past three decades, it remains negligible: Africa-related publications in 2013 still represented only four percent of the total of 58,649.

Gérard Depardieu, the famous French actor, once said that anyone who goes to Africa never really comes back. The powerful impact that the acquaintance and encounter with Africa can have on a researcher’s intellectual development is indeed often a lasting phenomenon.

Fortunately, the Depardieu Theorem now seems to be in full swing. In recent years, the list of well-known researchers who have turned their attention to Africa and contributed to the “upgrading” of development economics includes Roger Myerson (another Nobel laureate), Stanley Fischer, Daron Acemoglu, Jeffrey Sachs, Nicholas Stern, Justin Yifu Lin, and many others.

Célestin Monga is Managing Director at the United a Nations Industrial Development Organization (UNIDO). Along with Justin Yifu Lin, he is the author of The Oxford Handbook of Africa and Economics, Volumes 1 and 2 (OUP 2015).

How Asia got richer