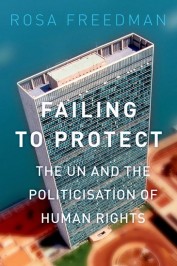 Failing to Protect: The UN and the Politicization of Human Rights

Cometh the new year, cometh the fresh round of allegations that United Nations peacekeepers raped or abused some of the most vulnerable people in the world. 2016 has just begun and already reports are surfacing of UN peacekeepers paying to have sex with girls as young as 13 at a displaced persons camp in the Central African Republic. UN peacekeeping operations have existed in that country for less than 2 years, but in that time the peacekeeping mission – MINUSCA – has been widely criticized for failing to investigate or to hold accountable personnel accused of raping women and children. Indeed, the problems were so severe within the first year that UN Secretary-General Ban Ki-Moon fired the head of MINUSCA in August 2015 – a move that does not seem to have done anything to alter the situation on the ground.

But this is not a new problem. Sexual violence perpetrated by peacekeepers occurs time and again. From child prostitution in Cambodia to “food for sex” in Liberia to women trafficked into Bosnia and chained to beds in peacekeeping barracks, peacekeeping operations frequently are treated like the devil’s playground. And no matter how many investigations are undertaken, reports are written, or hands are wrung, the UN has failed adequately to address these atrocities.

Peacekeeping activities are a key mechanism by which the UN ensures international peace and security, and operations have expanded year over year. Of course, with that expansion, the potential is increased for misconduct. And that misconduct includes serious crimes such as bestiality, financial corruption, and murder. Throughout that time, sexual violence has remained prevalent if not endemic. And those crimes are committed with impunity because the vast majority of allegations are not investigated, let alone prosecuted.

The flaw at the heart of the failures to hold accountable perpetrators of sexual violence in peacekeeping operations is that the laws and structures focus on protecting peacekeepers rather than victims. The system is designed to ensure that individuals deployed on peacekeeping operations are protected from local police and courts in the countries to which they are sent.

The situation is further complicated by the different laws covering different types of personnel, leading to uncertainty about who, if anyone, is able to investigate or prosecute an alleged offence. Because peacekeeping was not conceived of by the UN’s founders, no specific legal framework was created to cover peacekeepers. Instead, what has occurred is the use of more general frameworks — often modeled on laws governing State diplomats — for some personnel and the development of bilateral and multilateral agreements for others.

Civilian personnel are international civil servants with immunity from jurisdiction of any national authorities. The UN officially agrees with the idea that immunity of such personnel under the Convention on Privileges and Immunities of the United Nations is functional as opposed to absolute, thus stating that no immunity will operate for actions that are not part of official functions. Sexual violence can never be part of official functions, so in theory any allegations against civilian personnel should immediately be handed to local authorities. However, in practice the UN conducts its own lengthy and opaque investigations prior to determining whether there is sufficient evidence to cooperate with local investigations. As such, the immunity operates as absolute unless or until the UN determines the likelihood of the guilt of an alleged perpetrator.

Military personnel are covered by agreements between their own country and the UN. While they cannot be prosecuted in the host State, the troop-contributing country commits to prosecute troops who commit criminal offences whilst on missions. Although these agreements are not immunities, they operate as such in the vast majority of cases. National laws frequently only cover crimes committed on national territory, and while some militaries do have extraterritorial reach this is not always the case. Even where they are able to prosecute troops, the reality is that those States rarely, if ever, prosecute their soldiers. That may be because of the problems of investigating crimes committed abroad and in fragile or conflict zones. Or it may be because of the national political implications of doing so, and the likelihood that such prosecutions would undermine national support for contributing troops to UN peacekeeping operations.

The culture of impunity is not only created by the laws that seek to protect peacekeeping personnel, but also by the frequent and systematic failures to deal with allegations of sexual violence. All-too often, allegations made to UN personnel are ignored, covered up, or not passed on to the people who are able to deal with them properly. The former head of MINUSCA insisted that such problems are systemic and that structural changes are required at the UN’s highest level in order to ensure that allegations are handled correctly. Until now, most information has come from outside of the UN; indeed, Amnesty International exposed the latest allegations against MINUSCA, following a long-tradition of NGOs being the main sources of information regarding sexual violence committed by peacekeepers.

The situation that we are in is that peacekeepers – who at the bare minimum should “do no harm” – are able to rape women and children with impunity. The system is flawed because it is designed around protecting peacekeepers rather than protecting victims. Moreover, the laws that do exist frequently are not implemented. Structural changes need to be made, but there needs to be willingness from Member States or the UN Secretariat, or both. Suggestions for radical reforms, such as an international tribunal for peacekeeping personnel, have been ignored or blocked by States wanting to retain control of their own troops. The UN’s zero tolerance approach to sexual abuse perpetrated by its staff has not materialized into anything beyond words and statements. We need more than promises to “name and shame” States that do not prosecute their troops, and we need more than promises of new policies or internal training of staff. What we need is a new system, and one designed by people who do not have vested interests in continuing to place protection of peacekeepers above protection of victims.

Featured image credit: “The UN battalion leading the parade during the Bastille Day 2008 military parade on the Champs-Élysées, Paris.” by Marie-Lan Nguyen. CC BY 2.5 via Wikimedia Commons.