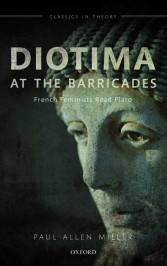 Of all the things we could possibly care about, why should we care about the reception of Plato? Wars rage round the world. The planet is in the process of environmental meltdown. Many remain mired in poverty, oppression, and disease. Surely this is a most obscure, not to say obscurantist, pursuit. But perhaps we are too hasty. Not to say that all the issues listed above are not urgent, and arguably more urgent than our scholarly pursuits, but if we take the example of the way Plato was read by French feminists in the 1970s and 1980s, we start to realize that what seem impossibly recondite arguments about the gendered nature of western metaphysics in fact were laying the groundwork for not only for women’s studies, gender studies, and queer studies, but also for the social movements that came in their wake and inspired them. We start to realize that these arguments have fundamentally changed the way we see ourselves and our societies. Luce Irigaray’s reading of Plato’s myth of the cave, for example, may not be stuff of everyday conversation, but Speculum: De l’autre femme spawned an intellectual earthquake in France, whose reverberations can be felt not only in our seminars but also in movements for marriage equality and the political acceptance of the LGBT community. The reception of Plato in fact has real consequences. Why?

Let us take for granted the importance of Plato’s Socrates in the foundation of not only western philosophy, but also political thought, literary theory, educational theory, and rhetoric. Beyond that, the French feminists and their interlocutors represent the intellectual substructure of the basic theoretical and philosophical reflection that has been central to work in literature, cultural studies, political theory, gender studies, feminism, and to a lesser, but not insignificant, degree architecture, art history, musicology, critical legal studies, and anthropology for the past thirty years. And thus in examining the relation of Plato’s texts to the thought of thinkers such as Simone de Beauvoir, Hélène Cixous, Luce Irigaray, and Julia Kristeva, and their dialogues concerning these texts with a variety of interlocutors including Hegel, Marx, Nietzsche, and Freud, as well as, Lacan, Derrida, and Foucault, we are looking at nothing less than a major portion of the basic intellectual equipment of postmodern culture in its most fundamental relation to the history of western thought. These are the thinkers and the dialogues that consciously or unconsciously have determined our assumptions about the nature of meaning, consciousness, sexuality, gender, and even truth. There are other dialogues that participate in that construction and they should not be neglected—Russell, Wittgenstein, and Rorty; Ghandi, Said, and Achebe, to name a few—but in the end it is hard to see how any of these discussions, no matter how difficult, could be imagined as obscure.

However, I would want to go a step further and argue that the reception of Plato has not only had a critical impact on how we understand the world, and hence on how we live in it, but also that the reception of Plato and other ancient thinkers will continue to be a matter of some urgency as we seek to respond to the most pressing issues of our world. If we are to know where we come from and imagine where we might go, we must understand the structures of thought that determine our current possibilities, and by coming to know those delimitations in depth, we must seek their beyond. This is the fundamental calling of reception studies. A true thought from the outside, a true moment of thinking differently, can only emerge from the most profound genealogy of the present. The ancient, modern, and postmodern authors named above have all played significant roles in structuring the thought-world in which virtually every contemporary scholar of the humanities operates. This does not mean that we do or should share their values. It does not mean that they embody timeless or universal truths that must impress upon others.

The writers of the ancient world, and indeed of the premodern world, do not as a rule share our assumptions about human rights, gender equality, or slavery, and yet our most basic conceptions of beauty, justice, goodness, and the good life all trace their genealogy to these same writers. The recognition of this fact should serve as a cautionary tale in two specific senses: first, we are perhaps ourselves a good deal less free, tolerant, and enlightened than we imagine (as the continuing legacies of fascism, colonialism, and totalitarianism would suggest); and second, the positive legacy of western culture may have less to do with a presumed inheritance of universal themes or values, and more to do with a certain quality of attention, a certain critical relation of the self to itself, and a certain ethic of care that makes possible the creation of complex systems of reflection that are both resistant to dogmatic reduction and capable of producing moments of genuine utopian imagination. In studying the reception of these texts we assume an active and responsive stance toward them. They become a means of reflection and an incitement to imagination. Plato’s texts, in short, are good to think with.

And thank goodness that our reception of Plato is not simply passive, is not simply a function of our effacement before its transcendental power and penetration. Because if truth or wisdom or beauty or justice or love were really an unchanging inert possession that could be passed from one person or generation to the next, then our individual lives, our desires, our pursuit of wisdom would be meaningless. Philosophy, psychoanalysis, and the arts would be nothing more than a series of choreographed moves in pursuit of a pre-established end, with regard to which any individual variation would be either superfluous or perverse. If absolute interpretive anarchy is the denial of meaning, a rigid orthodoxy, the imposition of an unchanging law, does the same. Meaning is produced precisely in the moment of play, in the moment of seeking, in the moment of love and desire. That is when the way forward is revealed, and that is why Plato’s texts remain so powerful, because they force us time and again to interrogate ourselves and others, not so as to produce a superficial perplexity, but always in order to find the next step, the move beyond: the vision that points beyond itself.

Paul Allen Miller is Carolina Distinguished Professor of Classics and Comparative Literature at the University of South Carolina. He is the author of Diotima at the Barricades: French Feminists Read Plato (OUP, 2015).