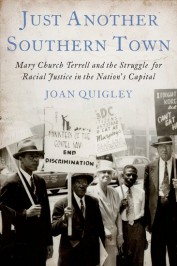 Just Another Southern Town: Mary Church Terrell and the Struggle for Racial Justice in the Nation's Capital

When Mary Church Terrell died on 24 July 1954, at the age of 90, her place in civil rights history seemed secure. She had served as the first president of the National Association of Colored Women. She had been a charter member of the NAACP. And in 1953, she had won a unanimous decision from the Supreme Court that desegregated Washington, D.C. restaurants and paved the way to Brown v. Board of Education, the landmark school desegregation decision, a year later.

Not surprisingly, Terrell’s death led to an outpouring of grief in the capital. Mourners filed past her open coffin, which lay in state at the NACW’s headquarters. Several hundred people mobbed her funeral service at Lincoln Temple Congregational Church. Still more gathered in the church basement and outside, listening on loudspeakers. She was Rosa Parks before Rosa Parks: dignified, galvanizing, a veteran of decades of activism.

Terrell’s odyssey to the Supreme Court began on 27 January 1950. At the age of 86, she staged an outing to Thompson’s Restaurant, a cafeteria located a few blocks from the White House. Blacks were excluded from most downtown restaurants, with exceptions including Union Station and federal government cafeterias. Thompson’s refused to serve her and two of her companions because they were “colored.” She took the matter to court, seeking to enforce Reconstruction-era laws that barred discrimination by Washington restaurants. Three years later, on 8 June 1953, the Supreme Court released a unanimous decision in District of Columbia v. John R. Thompson Co., Inc., invalidating segregated restaurants in the capital. Terrell told the Washington Post she could “die happy” knowing that African American children would not grow up thinking they were “inferior” to white children.

Terrell was the product of a rarefied upbringing. Born in 1863, the year of the Emancipation Proclamation, she lived as a young girl in Reconstruction-era Memphis. Her parents were former slaves. Her father, who won a test case of his own under the Civil Rights Act of 1866, amassed wealth from a billiard hall and brothels, which he owned, and from real-estate speculation. While still quite young, Terrell went north, studied in Ohio schools, and graduated from Oberlin College in 1884—the same day her future husband, Robert H. Terrell, graduated from Harvard College. They met as teachers in Washington and married in 1891; a decade later, President Theodore Roosevelt appointed Robert Terrell to a local judgeship, cementing the Terrells’ stature. They were an early twentieth century African-American power couple: accomplished, well educated, and politically savvy.

Because she lived in Washington, though, Terrell also lived with Jim Crow and the blunt force of racial prejudice. This was especially true after 1913, when the administration of President Woodrow Wilson segregated federal employees. In 1916, a drug-store clerk refused to serve Terrell at the soda fountain. A white property owner refused to sell her home to Terrell because she was black, according to Terrell’s memoirs, which she self-published in 1940. The Washington branch of the American Association of University Women denied her membership application in 1946, even though, as an Oberlin graduate, she satisfied the criteria for admission. Ultimately, after a protracted fight, she got in, but the experience drove her to spearhead the restaurant challenge.

Thompson was Terrell’s crowning achievement. At her 90th birthday celebration on 10 October 1953, Walter White, the NAACP’s executive secretary, hailed her as “a great American.” She received the Diamond Cross of Malta, whose previous recipients included Eleanor Roosevelt and Marian Anderson, and a Seagram Vanguard Award, alongside the second honoree, Thurgood Marshall.

Then, after Brown, the battle pivoted to the South. Rosa Parks helped spark the Montgomery, Alabama bus boycott in 1955, almost six years after Terrell had begun her Washington crusade. Sit-ins erupted at lunch counters in 1960, a decade after Thompson’s had first refused to serve Terrell. Ironically, she and Thompson had ushered in Brown, only to be eclipsed by the struggles that followed.

Terrell, long a student of her own press coverage, would probably be surprised by her relative obscurity. It’s a pretty safe bet that she wouldn’t like it. Still, her legacy resonates, especially while a new generation of activists confronts police brutality and racial bias on college campuses. As Terrell said more than 60 years ago: “We’re second class citizens because we sit idly by.”

Joan Quigley is the author of Just Another Southern Town: Mary Church Terrell and the Struggle for Racial Justice in the Nation’s Capital. An attorney and former Miami Herald business reporter, she won the 2005 J. Anthony Lukas Work-in-Progress Award for her previous book, The Day the Earth Caved in: An American Mining Tragedy. Follow her: @Joan_Quigley.

Frederick Douglass’ family and the roots of social justice