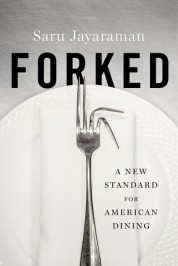 If someone were to tell you that the restaurant industry is one of the lowest paying sectors in the US economy, the types of jobs that might come to mind include those in the fast food segment. Not surprisingly, workers from all parts of the restaurant industry—tipped and non-tipped—live in poverty. Many employers fail to pay their workers fair wages and provide paid sick days (thus increasing the risk of spreading illnesses). The infographic below illustrates just some of the restaurant industry’s shortcomings, with data from Saru Jayaraman’s new book, Forked: A New Standard for American Dining.

Saru Jayaraman is Co-Founder and Co-Director of the Restaurant Opportunities Centers United (ROC United) and a graduate of Yale Law School and the Harvard's Kennedy School of Government. She has been named one of Crain's "40 Under 40," CNN's "Ten Visionary Women," New York magazine's "Influential of New York," and a 2014 White House "Champion of Change." Her work has been profiled extensively in the New York Times, and she has appeared on CNN, MSNBC, Bill Moyers Journal, NBC Nightly News, Today, and Real Time with Bill Maher. She is the author of Forked: A New Standard for American Dining.