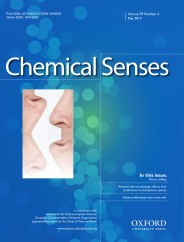 Publishing original research and review papers on all aspects of chemoreception in both humans and animals.

During the search for scents of anger and aggression in human beings, several English idioms come to mind relating aggression to odors: ‘To be incensed’ describes somebody feeling angry with the related meaning of the word incense, a substance that produces a strong smell when burned. ‘To release steam’ paraphrases behavior to control angry intentions by emitting volatile substances. ‘To be in a huff’ transforms huff in the sense of a blast of air into a burst of angry feelings. However, whether ‘letting off steam’ produces a distinct scent – and if so – whether others can detect this signal, is an important piece of the puzzle that is about to be solved.

In humans, the most scented apes, one can find a very high number of sweat producing glands in the skin, and as a result, rather intense body odor. Researchers exploring psychological aspects of communication via human body odor are interested in the causes, means, and effects of chemosensory communication between humans. Similar to the term ‘pheromones’ (a term that is commonly used in animal olfactory communication), chemosignals are defined as chemical signals in humans that convey information via volatile substances. Initial studies have shown that the sense of smell influences the interaction between a baby and its mother, attractiveness development between mating partners, and the communication of identity information such as age, gender, and health status. Interestingly, many emotions can be communicated via chemosignals. Humans emit a specific body odor when they are stressed or scared; for example, right before a university exam or a parachute jump. Furthermore, human tears contain chemosignals that inform others about their sadness.

For more insight into the chemosensory communication of anger and aggression, we can reference animal research that indicates the importance of the sense of smell. Rodents with a defective olfactory apparatus have been seen to stop displaying aggression towards an intruder. Fruit flies release a distinct chemical substance – an aggression pheromone – when provoked. In humans, personality traits related to aggression and dominance can be detected by smelling individual body odor, while competitive behavior has been seen to produce fear-inducing chemosignals.

Individuals smelling aggression chemosignals have been observed as unable to differentiate them from exercise chemosignals alone, but the exposure to aggression chemosignals slightly altered their processing of anxiety cues. It is plausible that the ability to detect a person who represents a potential harm to us triggers a natural survival instinct, and that this ability might be a remainder from our evolutionary past.

Olfactory information is only one facet of the complex and multisensory social interaction. When interacting with somebody, we do not only smell our counterpart, we also hear and feel them.

Nevertheless, the impact of aggression chemosignals is rather limited. Olfactory information is only one facet of the complex and multisensory social interaction. When interacting with somebody, we do not only smell our counterpart, we also hear and feel them. Most importantly, we see that person. Humans acquire most information visually, which leaves less impact for the other senses. Additionally, western societies commonly suppress natural body odors. While we do not expect aggression chemosignals to act like releaser pheromones eliciting changes in behavior, we do think that they are able to act like alarm pheromones informing us of a potentially harmful situation.

Chemosignals actually have the important advantage of ‘taking a sniff of the past.’ A person only looks or sounds angry while he or she is experiencing the emotion. Visual and auditory cues are only able to convey information about the present state of a sender’s mind; those sensory inputs vanish as soon as the person calms down. Contrarily, chemosignals of aggression may still be present in a location after a person has experienced an angry outburst there, informing the receiver that a harmful person was close by.

It is possible to analyze single volatile compounds of odor samples that might explain the complex odor -cocktail in sweat. Steroid hormones like testosterone and androstenedione have been associated with aggression and body odor. Their quantification, however, depends on other non-volatile substances such as the stress hormone cortisol, the mood-dependent neurotransmitter serotonin, or the energizing hormone adrenaline.

Identifying and quantifying one or several chemical compounds that determine the chemosignal of aggression is a piece of that puzzle that has still not been solved.

Smiljana Mutic is Psychologist and Doctoral researcher at the Neuroscience of Chemosensation Lab (Prof. Dr. J. Freiherr) at the Clinic for Diagnostic and Interventional Neuroradiology (Prof. Dr. M. Wiesmann) at the RWTH Aachen University Hospital in Germany. She investigates Chemosensory Communication and the Neuroscience of Aggression in Humans and conducted experimental research at the Monell Chemical Senses Center and the University of Pennsylvania (School of Medicine) in Philadelphia. Smiljana is first author of the paper 'You Smell Dangerous: Communicating Fight Responses Through Human Chemosignals of Aggression' published in Chemical Senses. She is also first author of the special issue article ’Chemosensory Communication of Gender Information’.

Stars in the telescopic eye: LVHIS and the nearby Universe