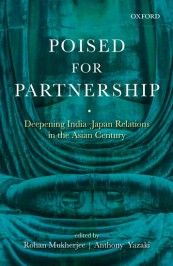 Poised for Partnership: Deepening India–Japan Relations in the Asian Century

It is no secret that India-Japan relations have been on a strong positive trajectory over the past 18 months. Soon after taking office in 2014, Prime Minister Narendra Modi made Japan his first foreign destination outside of India’s immediate neighborhood and while in Tokyo, he and Japanese Prime Minister Shinzo Abe upgraded the India-Japan relationship to what they called a “Special Strategic and Global Partnership.” Indeed, with a broad array of common or complementary interests ranging from the need to respond to the rise of China, to the need to manage their opposite demographic and economic trajectories (India has a large youth population and a rapidly growing but capital-poor economy, whereas Japan has a long-stagnant but capital-rich economy and ageing population), the two countries have numerous potential avenues for mutually beneficial cooperation.

At the time of Modi and Abe’s first official meeting as prime ministers in 2014, the two sides agreed to deepen their cooperation in a wide range of areas such as defense, nuclear issues, economics, and people-to-people exchanges. From the Indian perspective, the meeting was widely deemed a success, particularly in terms of Abe’s pledge to generate roughly $30 billion worth of Japanese official development assistance (ODA) and foreign direct investment (FDI) into India over a five-year span. Yet there were still areas with visible gaps between the two sides, for instance with the long-negotiated civil nuclear cooperation remaining unfinished and the Indian side refusing to upgrade the defense and foreign ministries’ “two plus two” dialogue to the ministerial level. Indeed, these outcomes were symptomatic of the broader historical relationship between India and Japan in that lofty rhetoric of increased cooperation were made with relatively little attention being paid to the minutiae of how such promises would be turned into reality.

The second prime ministerial meeting between Modi and Abe, which took place in Delhi last month, appeared to move forward on a number of big-ticket items. Several days before Abe’s arrival, Delhi announced that it had accepted a roughly $15 billion Japanese plan to build India’s first high-speed rail, choosing the Japanese plan over a Chinese proposal. The deal appeared to be a win for both sides, with Japan beating out its most significant rival in implementing the project, while India is now set to benefit from Japan’s widely acknowledged prowess in railway technology. Once Abe arrived in India, the elusive civil nuclear agreement between the two governments also appeared to approach a conclusion, with the two prime ministers announcing that the deal would be signed pending the finalization of technical details.

Still, it bears repeating that grand pronouncements by heads of governments frequently fail to produce any real change on the ground once the media attention surrounding an official visit wanes. Although friendly rhetoric and gestures have an important place in international relations, the India-Japan relationship has long been hampered by a lack of concrete and ambitious action to follow through on promises, rather than a lack of amicable discourse. Despite the fact that the two countries have pledged to improve their economic cooperation for over a decade, their bilateral trade has remained paltry, with both countries having a far more robust economic relationship with China, which is also a major strategic competitor for both sides. As such, rather than patting themselves on the back, the Indian and Japanese governments must now turn to the difficult task of translating words into action. For instance, the agreement in principle on civil nuclear cooperation is certainly a positive step forward, but, as the saying goes, the devil is in the details, and those are yet to be worked out. Similarly, Abe’s promise of Japanese FDI will be heavily reliant on the private sector, so the natural question to ask is how Japanese firms—which tend to be somewhat risk-averse compared to their Korean counterparts, whose ventures in India have been largely successful—will be coaxed into investing in an Indian market that lacks the level of infrastructure, predictability, and efficiency that these firms are used to at home. There are many such outstanding questions but the most important is how soon will the Indian and Japanese people be able to palpably reap the benefits of their countries’ political embrace?

In this context, the relative lack of rigorous, policy-relevant academic analysis on the India-Japan relationship is problematic. Whereas several of India’s other important international relationships, for instance with Pakistan, China, and the United States, have been studied and written about at great length, there remains a dearth of literature on India-Japan relations that would pave the way for successful implementation of the two prime ministers’ stated commitments. In doing so, it is important to acknowledge not just the boundless opportunities for cooperation that exist between the two countries, but also the real challenges that preclude them from fully translating intent into outcomes. Chief among these challenges are a mutual wariness of antagonising China; cultural differences in the way business, politics, and society operate; and basic normative differences over key issues such as climate change and nuclear energy. A true accounting of the potential of the India-Japan partnership would do more than exhort the two countries to embrace each other ever more tightly in their proclamations. It would acknowledge that actions speak louder than words.

Anthony Yazaki is a Research Fellow at the United Nations University Centre for Policy Research. Rohan Mukherjee is a Stanton Nuclear Security Fellow at the Massachusetts Institute of Technology. Both are editors of Poised for Partnership: Deepening India–Japan Relations in the Asian Century.

What makes the EU, the UN, and their peers legitimate?