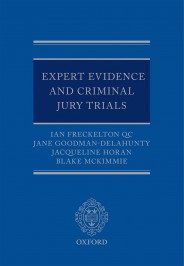 Although expert evidence in criminal jury trials is often heavily relied upon, the secrecy of the jury room has long prevented concrete analysis of the process. In a landmark study, the authors of Expert Evidence and Criminal Jury Trials have gathered the perspectives of jurors, judges, experts, and litigation lawyers from 55 criminal trials that took place before juries. The outcome is a comprehensive insight into how different people view issues relating to the controversial area of expert opinion evidence, and a reflection on how expert evidence can be more effectively utilised in the future. Below, Ian Freckelton QC answers some of our questions about this unparalleled study of expert evidence.

How would you define expert evidence?

Expert evidence is evidence, written or oral, in the form of fact and opinions by someone with specialised knowledge. The expert should have recognised experience and/or educational qualifications on a topic outside the common knowledge of the jury. Experts are uniquely permitted to give opinion evidence, whereas other witnesses can give evidence only about what they have directly observed or experienced.

What were the principal motivations in undertaking this study?

Expert evidence can be very complex and difficult to understand as its defining feature is that it is beyond the knowledge of non-experts. Because of this, there is a risk that jurors may rely on factors other than the content of the testimony when evaluating what an expert says. For example, they may be influenced by how confident the expert is. We wanted to understand the challenges faced by juries, and what perspectives judges, lawyers, and the experts themselves had on such challenges. We also wanted to explore potential changes to the admission, preparation, and presentation of expert evidence that might assist juries.

Did anything arise from your findings that particularly surprised or intrigued you?

The extent of reliance by the prosecution on multiple experts in a single case and the rarity with which the defence calls a rebuttal expert was unexpected. Another interesting finding was the mismatch between what participants thought was important or influential in evaluating the expert and what actually influenced perceptions. It was reassuring that the findings of this project are generally consistent with much of the experimental research on the influence of extra-legal factors (such as expert confidence), but that the effects of those cues was relatively modest. This confirms that juries do their best in the face of complex and conflicting expert evidence.

In your opinion, what makes an expert witness particularly persuasive to jurors?

There is a difference between what makes an expert persuasive to juries and what juries should ideally be persuaded by. Jurors can be persuaded by factors such as clarity and confidence of expression, and willingness to make concessions. Ideally, though, jurors would simply be influenced by the reliability of the science underpinning the expert evidence and its relevance to the facts in controversy, although this might require the assistance of legal counsel and the court.

What would you say is the most important recommendation for the future?

Many recommendations emerged from this project. Overall the most important recommendation is to do more to assist juries in evaluating expert evidence, by utilising reliability of expert opinions as a criterion for their admissibility, better pre-trial preparation of experts, considering other ways of presenting the evidence such as consecutive and concurrent evidence, and encouraging juries to ask more questions at trial.

Ian Freckelton QC is a practising Queen's Counsel and a leading Australasian scholar on expert evidence. He is the co-author of Expert Evidence and Criminal Jury Trials (OUP, 2016).