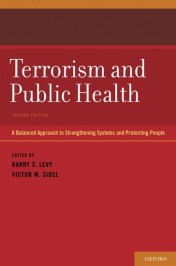 In 1933 in the midst of Great Depression, President Franklin D. Roosevelt, in his first inaugural address, wisely stated, “The only thing we have to fear is fear itself.” That wisdom has as much relevance today as it did during the Depression.

After recent attacks in Lebanon, Paris, and Mali – as well as the bombing of a Russian airliner over Egypt – there is widespread fear, exacerbated by the 24/7 news media and by national leaders, other government officials, and political candidates who are heightening fear for political gain.

There are many fears: Fear of more terrorist attacks. Fear of migrants and other people who look different, speak an unfamiliar language, or who practice a different religion. Fear of participating in the daily activities of life – seeing a movie, attending a concert or sports event, eating at a café or restaurant, or even walking down the street. And ultimately, fear of fear itself.

To the extent that terrorists succeed in instilling fear – and others heighten fear – the terrorists achieve their major goal.

And the response to terrorism can, in some ways, be as harmful as terrorism itself: when societies respond with overwhelming military force against nations or people with no involvement in terrorism, as the United States and its allies did in Iraq; when societies undermine civil liberties and violate basic human rights; when intelligence or security operations resort to torture or other forms of cruelty, often against innocent civilians; when huge resources are diverted from human services to military purposes.

From a public health perspective, there are many actions that can be taken after a terrorist attack has occurred. These actions include responding to the personal and community mental health consequences of an attack; measures to better understand and address the roots of terrorism; improving community preparedness and response capabilities, enhancing the capability of the public health infrastructure to respond not only to terrorist attacks but also to a wide range of more-frequent natural and human-made disasters, epidemics, and other threats to the public’s health.

Physicians, in taking the Hippocratic Oath, commit to “do no harm.” As nations respond to these terrorist attacks, we, as physicians and other health professionals, need to insure that we do no harm in combating terrorism, and that we strengthen – rather than weaken – our principles.

We need a balanced approach to strengthening systems and protecting people – an approach that protects the public and also protects human rights, civil liberties, and the values upon which our society is based.