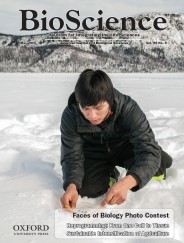 Bioscience publishes timely and authoritative overviews of current research in biology, accompanied by essays and discussion sections on education, public policy, history, and the conceptual underpinnings of the biological sciences.

If you went to college, your school likely had an official statement about plagiarism similar to this one from Oxford University:

Plagiarism is presenting someone else’s work or ideas as your own, with or without their consent, by incorporating it into your work without full acknowledgement. All published and unpublished material, whether in manuscript, printed or electronic form, is covered under this definition. Plagiarism may be intentional or reckless, or unintentional…

Quotations must always be identified as such by the use of either quotation marks or indentation, and with full referencing of the sources. It must always be apparent to the reader which parts are your own independent work and where you have drawn on someone else’s ideas and language.

On the surface, such statements seem straightforward, so you might be surprised to learn that they don’t adequately fit some aspects of scholarly writing in the sciences.

Consider the two passages in the figure below—one from the “methods” sections of a student’s senior thesis and the other from an article written by her thesis mentor (and others), published years earlier.

Should this be considered plagiarism? Certainly not.

Now, if the student had been an English major and the source text was a literary essay, the different context might well lead to a different answer. But this student was working within the accepted standards of neuroscience under the guidance of an expert in the discipline, and the source text was a research report published in a scientific journal. As I discuss in my viewpoint essay, certain types of text recycling are not only common in the sciences, they have been formally recognized as acceptable (and perhaps sometimes desirable) practice by the Committee on Publication Ethics.

For those unfamiliar with this aspect of contemporary scientific writing, it is worth noting that the sentence “Signal pixels of a region of interest were defined as having a gray value of three standard deviations above the mean gray value of a cell-poor area close to the region of interest” appears verbatim or nearly so in at least five of the mentor’s publications, and with only slight variation in many other publications as shown by the Google Scholar search results in the figure below.

Do students in scientific fields often confront decisions about text recycling? I suspect they do. In the past year, I have given two invited talks on the conventions and ethics of text recycling to Duke University graduate students as part of their RCR (Responsible Conduct of Research) training. At both events, a number of students indicated that they had already faced situations in their own writing involving decisions about text recycling—especially those who had joined established lab groups that had published papers closely related to the student’s own research. Perhaps it is time that universities acknowledged text recycling as an established practice in the sciences—in their plagiarism policies and in their teaching.

Cary Moskovitz is the Director of Writing in the Disciplines at Duke University. He is the author of the article "Self-Plagiarism, Text Recycling, and Science Education" in BioScience, now freely available to read for a limited time. His articles and essays related to the teaching of writing have appeared in such publications as The Chronicle of Higher Education, Science, College Composition and Communication, and Liberal Education. He has served as a consultant on writing pedagogy and writing in the undergraduate curriculum for a number of US colleges and universities. His current research interests include student writing in the undergraduate science curriculum, new approaches to providing feedback to student writing (including audio feedback and the Duke Reader Project), and text recycling in scientific writing.