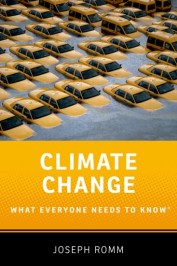 Climate Change: What Everyone Needs to Know

Last week, the the 21st meeting of the Conference of the Parties (COP 21) to the United Nations Framework Convention on Climate Change (UNFCCC), began in Paris, France. Here, Joseph Romm, author of Climate Change: What Everyone Needs to Know, provides additional insight into our environmental state of affairs, and what it means for us and the future of humanity.

1. There’s a difference between “global warming” and “climate change.”

Global warming generally refers to the observed warming of the planet due to human-caused greenhouse gas emissions. Climate change generally refers to all of the various long-term changes in our climate, including sea level rise, extreme weather, and ocean acidification.

2. Intense snowstorms are more likely to happen during warmer-than-normal winters.

3. Despite its phrasing, “global warming,” does not mean winters will cease to exist.

It is still going to be much, much colder on average in January than July. As for daily temperature fluctuations, they are so large at the local level that we will be seeing daily cold records—lowest daily minimum temperature and lowest daily maximum temperature—for a long, long time. That is why climatologists prefer to look at the statistical aggregation across the country over an extended period of time, because it gets us beyond the oft-repeated point that you cannot pin any one single, local temperature record on global warming.

4. Decreasing the amount of greenhouse gas (GHG) emissions is not sufficient to stop global warming.

Although atmospheric concentrations (the total stock of CO2 already in the air) might be thought of as the water level in the bathtub, emissions (the yearly new flow into the air) are represented by the rate of water flowing into a bathtub from the faucet. There is also a bathtub drain, which is analogous to the so-called carbon “sinks” such as the oceans and the soils. The water level will not drop until the flow through the faucet is less than the flow through the drain.

Similarly, carbon dioxide levels will not stabilize until human-caused emissions are so low that the carbon sinks can essentially absorb them all. Under many scenarios, that requires more than an 80% drop in CO2 emissions.

If you have a diet rich in animal protein, then it is likely you can significantly reduce your greenhouse gas emissions by replacing some or all of that with plant-based food. That is particularly true if your diet is heavy in the most carbon intensive of the animal proteins, which includes lamb and beef but also dairy. Globally, the GHG emissions from producing beef is on average more than a hundred times greater than those of soy products per unit of protein.

6. Fossil fuel companies in the US have spent tens of millions of dollars to spread misinformation about climate science.

For more than 2 decades, the fossil fuel industry has been funding scientists, think tanks and others to deny and cast doubt on the scientific understanding of human-caused global warming. In the same way that the tobacco industry knew of the dangers of smoking and the addictive nature of nicotine for decades, but their CEOs and representatives publicly denied those facts, many of those denying the reality of human plus climate science have long known the actual science.

7. Despite our initial enthusiasm, we’ve discovered that corn ethanol generates just as much GHG emissions as the gasoline we use now.

For instance, research has found that corn ethanol from Iowa converts only 0.3% of incoming solar radiation into sugar and only some 0.15% into ethanol. In addition, transporting biomass long distances has a high monetary and energy cost. Finally, internal combustion engines are a very inefficient means of energy conversion. All that inefficiency and energy loss means that you need a huge amount of land to deliver low-carbon biofuels to the wheels of a car, especially compared with say solar and wind power used to charge an electric vehicle.

Image Credit: “Not only our island nation that is sinking” by Nattu. CC BY 2.0 via Flickr.

Joseph Romm, Ph.D. is a Senior Fellow at American Progress and holds a Ph.D. in physics from MIT. He is also author of Climate Change: What Everyone Needs to Know.