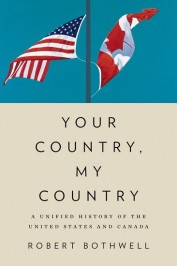 Your Country, My Country: A Unified History of the United States and Canada

One of the tasks of a Canadian ambassador to the United States is persuading his audiences that Canadians really are distinct from Americans. One ambassador commented that if he asked an audience “The Question”—was there a difference?—Americans would politely say no, not really, and Canadians would say the opposite. Is there a correct answer, and if so, what is it?

It depends. There is the oldest version of The Question, which is very direct. Asked the difference between Canadians and Americans, the quick response is, “Twenty-five percent.” Yes, Americans are, per capita, richer. The Canadian dollar was recently devalued, and the Canadian dollar is indeed worth seventy-five American cents. So there’s a difference – Canadians have to pony up more to go to Florida. But they get there just the same. On the other hand, the further down the income scale you go, the better-off a Canadian will be compared to the corresponding American. That applies even to the fabled “middle class,” where alarmed American commentators recently noted that Canadians’ incomes and purchasing power surpass Americans’.

There is no question when it comes to Canadian French. The most obvious point to make is that native French-speakers in the United States will soon be as extinct as the passenger pigeon, whether in Louisiana or New England. French names, however, survive from Coeur d’Alene in Idaho to Baton Rouge in Louisiana. Canada is a bilingual country, and there can be little doubt that the Canadian-American frontier has helped French in Canada from being swamped like French in Louisiana.

The existence of Canadian English sometimes seems like a distinction without a difference. Three-quarters of Canadians speak English, or at any rate do not speak French, except as a learned, second language. Americans, if pressed, might come up with Canadians saying “oot” for “out” and “aboot” for about, and zed for zee (meaning the letter Z). Canadians are also thought to be addicted to “eh” as a kind of universal interjection.

Well, it depends. Canadians on the West Coast sound like West Coast Americans. Canadians in the Maritime Provinces sound like New Englanders (or used to, before television homogenized accents in both countries). The pronunciation of out and about has been exaggerated as a difference, and the use of “eh” is usually considered a class thing, an indication of education and social status. The most distinctive accent is in Newfoundland, but there is considerable dispute whether Newfoundland English can be considered “Canadian.” (Newfoundland was separate until 1949.)

Sometimes Americans consider Canadians to be the original stodges. Canadians are, in a word and a half, “tight-assed,” and possibly also “half-assed” and clueless. They are respectable but dreary, or comically inept – like the portrayal of the Mounties in cartoons (Dudley Do-right is the best-known Canadian character) or the dim-witted Mounties in the 1987 movie, The Untouchables. More recently the movie Argo (inexplicably an Academy-award winner) gave the same characteristics to the Canadians who rescued Americans from Tehran in 1979. Admittedly, sometimes Canadians are also virginal and doe-eyed, as in Mary Pickford, the iconic actress of the 1920s. But then Mary Pickford was considered to be American and her Canadian origins, while not secret, were not stressed by Hollywood publicists. It is sometimes believed that Ronald Reagan got his favourable (favorable) impression of Canadians from Mary Pickford.

Canadians on the other hand regard Americans as wild and woolly, self-seeking, impossibly individualistic, materialistic, boastful, vulgar and – you guessed it – clueless. When Canadian sociologists get to work all these characteristics reappear, but dressed up in the sacred language of academese. The riposte to the Canadian stereotype of Americans is two words: “Rob Ford,” the cocaine-snorting, bellowing and extremely photogenic ex-mayor of Toronto. Or, if you like, there is also Justin Bieber. As for the respectable end of Canada, all one need do is imagine the legions of Americans who score high on the respectability scale. It is tempting to say that when you gaze across the border in either direction you are actually not seeing the other side – you are looking in a mirror.

This difference is so silly that it barely merits comment – which is to say that reams of books have been written on the subject. Politics and political ideas have always crossed the frontier from the time when monarchical Americans brought their faith in George III to the Canadian wilderness in 1783. Canadian and American politicians behave much the same and the political agendas in both countries are remarkably (or not so remarkably) similar. The greatest perception of difference arose in the 1970s and 1980s when the United States veered toward Reaganism and Canada continued liberal. But that was a matter of phase. In the 2000s Canada moved to the right while the United States under Obama moved, if not to the left, at least to the centre (center).

On the other hand the existence of two sovereign nations has occasionally meant that one country is a refuge for people fleeing from the other. Canada’s first Americans, in 1783, were political refugees, and for the next eighty years Canada was also a refuge for liberated slaves and from the 1830s to the 1860s, the terminus of the Underground Railroad. There were draft-resisters in the 1960s, and Americans disenchanted with George W. Bush in the 2000s. We do not know how they felt when Canada acquired an ultra-conservative government in 2006.

The American pollster Andrew Kohut has argued that the real differences between Canada and the United States are regional and not national. That is, Canadians and Americans in adjacent regions are likely to resemble each other – New England and eastern Canada, Washington and Oregon and British Columbia (but perhaps not Alaska). This seems to be a reasonable observation. I would add that liberal Americans have more than a passing resemblance to liberal Canadians, and conservative Canadians to conservative Americans, worshiping at the shrines of Ronald Reagan and Margaret Thatcher – a sign, incidentally, that both countries are indebted to their transatlantic progenitor, Great Britain.

It is true that once they arrive, Canadians can go undetected in the United States, often for long periods.

Canadians look like Americans – and everybody else, in an age of migration. They dress alike, with certain seasonal differences. The American prairies extend north to Canada, the Great Lakes are shared water, and even the Appalachians have a Canadian spur.  The film Chicago (2002) was actually filmed in Toronto, which frequently masquerades as a whole variety of American cities.

The notion that Canada and Canadians resemble the United States and Americans will only take you so far. After all, Dick Cheney has just published a book bearing the proud title Exceptional and it is not an autobiography, but rather an argument for the uniqueness of the United States.

Robert Bothwell is the Gluskin Professor of Canadian History at the University of Toronto. He has written numerous books on Canadian-American relations and international history, including Your Country, My Country: A Unified History of the United States and Canada, The Penguin History of Canada and Alliance and Illusion: Canada and the World, 1945-1984.