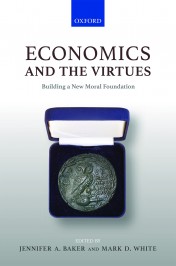 Economics and the Virtues: Building a New Moral Foundation

The star-studded new film The Big Short is based on Michael Lewis’s best-selling expose of the 2008 financial crisis. Reviewers are calling it the “ultimate feel-furious movie about Wall Street.” It emphasizes the oddball and maverick character of four mid-level hedge fund managers in order to explain what it would take to ignore the rating agencies’ evaluations and bet against the subprime industry—that is, their own industry. The men depicted made a lot of money from hoping that the housing bubble would burst, which would, as they themselves acknowledge, harm countless people. Nonetheless, they are the heroes of the story. As the director Adam McKay says, “you’re rooting for these guys,” even though they are “kind of doing their job. The way the market’s supposed to work is, if there’s a bad investment, you short it.”

But if this is the way the market is supposed to work, someone needs to explain this to the hedge fund managers on whom the film is based, who, in real life as in their cinematic depictions, cannot get over the insanity of their situation. If anyone is likely to defend the upside of the housing crisis, it would seem to be a person who is benefitting in the tens of millions from it. And yet these men continue to cite greed, stupidity, and arrogance as the reasons for the housing bubble that earned them millions.

Perhaps it is wrong to expect that the financial crisis, or any crisis at all, can be explained through a few characters or clever dialogue. For example, there were more ‘players’ involved in the financial crisis than can be included in any dramatic depiction. Even economists using the most abstract mathematical tools can’t seem to penetrate the complexity of the crisis, especially the ethical (or unethical) dimensions of the behavior that contributed to it. No matter how complex the processes, the psychology of the players, or the motivations behind the actions organizations take, if we cannot make moral sense of our own roles and behaviors, we are in an uneasy position, unable to answer the simplest of questions, such as:

‘The Big Short’ shows us that virtue has an important role in explaining behavior,… even in fields as technical and apparently ethically ‘sterile’ as modern finance.

These are questions that ultimately need answering with an account of moral psychology, something philosophers working in virtue ethics are well suited to provide. An account of virtue is a way of proposing and then testing an account of moral psychology that can be incorporated into traditional economic analysis. An account of virtue will answer what counts as good behavior, what motivates it, and even what justifies it, moreso than the traditional modelling of economic choice as a cost-benefit problem.

When developed in isolation from the actual ‘players’ in the financial market, moral psychology can seem like a quaint guide to living well. Applied to the questions we want answered about our financial system, however, it gains a new relevance. It proposes that behavior that makes agents uncomfortable is presumably wrong, and perhaps even imprudent, and allows us to test the implications of this. It asks us to defend our systems in terms of human good, wherein long-term financial well-being is a part but not the entirety of that. To think of virtue in relation to economics—even the bewilderingly ‘scary and very complicated’ aspects that no one explains easily without math and the film’s characters refer to as ‘the abyss’—  is the only way to fully explain our roles within a complex system such as modern finance. After all, even our most advanced economic methods, so complex that the public is never likely to learn them, are still part of our shared and social world. We don’t have to pretend they are simpler, or that it all boils down to character, to question the role they play for us all. We want to know, after all, the contribution that economic spheres of life make to the rest of it.

The film’s main characters are ambivalent about their ability to profit from others’ losses. How can we convince them otherwise? First, we would point out that it is a mistake to assume that virtue is nothing more than living up to the standards of the economic model of the human actor—that is, pursuing one’s self-interests while staying within minimal bounds of morality. Not even those who developed this approach for economic modelling meant it to amount to a model of character, identity, or virtue. No real person behaves exactly as the homo economicus of economic models would predict, and failing to measure up to that standard is no real failing.

Second, no one sphere of life, not finance or business, is capable of working as a guide to life in general. When we replace an account of human good with one meant to explain only economic behavior, we can become confused about what the good means to us. The explanation that shorting the market was ‘business as usual’ is not a comfort to those buffeted by the financial crisis, either.

The Big Short shows us that virtue has an important role in explaining behavior, even in fields as technical and apparently ethically ‘sterile’ as modern finance. More broadly, even though it dates back several millennia, virtue ethics can provide us with new ways to understand modern phenomena such as the recent financial crisis. It does so, not by replacing mathematical economic analysis, but by supplementing it with an explicit normative framework to help explain what went ‘wrong’—in all senses of the word.