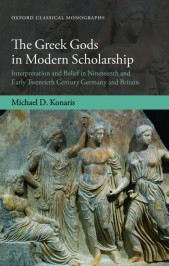 The Greek Gods in Modern Scholarship: Interpretation and Belief in Nineteenth and Early Twentieth Century Germany and Britain

The nineteenth and early twentieth centuries are a key period in the history of modern scholarship on ancient Greek religion. It was in nineteenth-century Germany that the foundations for the modern academic study of Greek religion were laid and the theories formulated by German scholars as well as by their British colleagues in the late nineteenth and early twentieth century exercised a profound influence on the field which would resonate until much later times.

Throughout this period fierce debates were conducted over the interpretation of Greek religion: what were the origins of the Greek gods and what light did they shed on their conception in historical times? Was there a monotheistic strand in Greek polytheism and if so, how was it to be explained? In terms of an innate human tendency, or diffusion from abroad? And if the latter, where from? How similar or different was Greek religion to the religions of other Indo-European peoples, to the non-Indo-European religions of the ancient Near East, or to the modern polytheistic religions of Africa and Asia? At a time of growing scientification and professionalization in the discipline, classical scholars in Germany and Britain drew on developments in philology, archaeology, comparative mythology, anthropology, and later sociology to propose strikingly different answers to these questions.

Consider the issue of origins, for example. According to a very influential tradition of comparative interpretation in the nineteenth century, the Greek gods, like the gods of other ancient religions, derived from the personification of natural elements and domains—Zeus of the sky, Poseidon of the sea, and so forth. Because of the variety of natural forces and phenomena, Ludwig Preller (1809-1861), one of the most eminent representatives of this approach, described polytheism as an inherent weakness of Greek religion.

In the course of the second half of the nineteenth century, this view was strongly opposed by scholars such as Heinrich Dietrich Müller (1819-1893) and Ernst Curtius (1814-1896), who rejected the idea that Greek religion was inherently polytheistic and to whom the worship of natural powers was redolent of irrationality and mysticism. In their eyes, it was typical of Asian religions, but could not have provided the basis of the religion of the Greeks. Far from being personifications of different elements of the natural world, they suggested that Zeus, Poseidon, and the other Olympians were originally universal, omnipotent gods—like the God of Judaism and Christianity. Ascribing a form of monotheism to the Greeks they argued that initially each Greek community had worshipped a single, all-powerful god. Greek polytheism was a late outcome of historical contingencies as the separate gods of the different communities were gradually brought together and their once universal powers started to contract.

This theory was, in turn, challenged in the late nineteenth and early twentieth century by British anthropology and evolutionism. The concept of gods endowed with universal powers was now seen as belonging to late stages of religious development rather than its beginnings. Jane Ellen Harrison (1850-1928), one of the first to apply sociological theory to the study of Greek religion, in fact envisaged an early stage of Totemism in ancient Greece where no gods at all had existed. In her view, what was primary in Totemism was “the idea of the unity of a group.” Gods were a “by-product” that emerged gradually out of pre-existing rituals which expressed group cohesion.

These issues were far from being of mere antiquarian interest. The interpretation of Greek religion during the nineteenth and early twentieth century was heavily affected by, and closely implicated in, contemporary discussions of crucial questions concerning the origins and nature of religion, the roots of Western culture and its relation to the “Orient,” or humankind’s attitudes to nature. Clashes between devout Christian scholars and proponents of “scientific atheism,” confessional rivalries between Catholics and Protestants and national rivalries between the Germans and the British were some of the factors that informed the study of Greek religion and made it highly relevant to present concerns.

The modern assumptions and agendas of past interpretations of Greek religion highlight the intersection of the history of the discipline with contemporary intellectual, cultural, and religious history. They not only shed light on why the field evolved in the way it has, but also invite us to reflect on the interrelations between current views of Greek religion and their context.

Image Credit: Hermes, Dionysos, Ariadne and Poseidon (Amphitrite is also depicted but cannot be seen here). Detail from the belly of an Attic red-figure hydria, ca. 510 BC–500 BC. From Etruria. Photo by Jastrow. Louvre Museum. Public Domain via Wikimedia Commons.

Michael D. Konaris studied Classics and Ancient and Modern History at Oxford and Cambridge and has held postdoctoral research positions at FU, Berlin, Princeton, and EHESS. The Greek Gods in Modern Scholarship: Interpretation and Belief in Nineteenth and Early Twentieth Century Germany and Britain is based on his doctoral dissertation at Balliol College, Oxford under the supervision of Prof. Robert Parker.