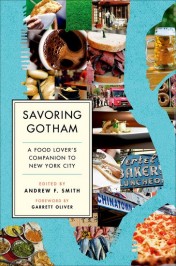 Food lovers with a soft spot for New York City gastronomy congregated on Tuesday, 17 November, to celebrate the upcoming book Savoring Gotham: A Food Lover’s Companion to New York City, edited by Andrew F. Smith. The bright, colorful cover parallels the diversity and richness of what it’s like to eat in the Big Apple; with nearly 570 A-Z entries on the history of NYC food and drink, we could hardly wait to dig right in to the book. And what better way to launch a book on New York City food and drink by savoring Gotham’s food and drink? We take a look at the highlights of the night.

Andrew F. Smith (Editor in Chief) teaches nine courses on culinary topics at the New School in New York. He serves as the series editor for the "Edible Series" at Reaktion Books in the United Kingdom, and is the author or editor of twenty-four books, including his most recent, Savoring Gotham: A Food Lover's Companion to New York City (OUP, 2015), American Tuna: The Rise and Fall of an Improbable Food (University of California Press, 2012), The Oxford Encyclopedia on Food and Drink in America (OUP, 2013), and New York City: A Food Biography (Rowman & Littlefield Publishers, 2013).