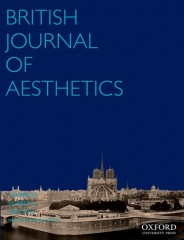 Founded in 1960, the British Journal of Aesthetics is highly regarded as an international forum for debate in philosophical aesthetics and the philosophy of art. The Journal is published to promote the study and discussion of philosophical questions about aesthetic experience and the arts.

What could philosophy have to do with odors and perfumes? And what could odors and perfumes have to do with art? After all, many philosophers have considered smell the lowest and most animal of the senses and have viewed perfume as a trivial luxury. Worse yet, in modern society, the nose and smells have often been the butt of jokes from Gogol’s famous short story to schoolboys snickering over farts. And when people have been asked which of the senses they could give up if forced to make a choice, smell usually comes in first.

It is no wonder then, that even the most expansive lists of the fine arts have seldom included perfumes or that, until the 1980s, there were few artists who used odors or perfumes as part of their artworks, and even fewer who focused their careers on making olfactory art. But over the last three decades things have changed. A growing number of artists have begun to use odors in their artworks and a few, such as Clara Ursitti or Peter de Cupere, devote most of their artistic efforts to olfactory art. As for perfumes, a number of perfumers and perfume enthusiasts, such as Jean-Claude Ellena or Chandler Burr, have become more assertive in claiming that perfume should be considered a fine art, whereas some contemporary artists have created or commissioned perfumes or perfume-like works as part of conceptual, performance art, or installation pieces. Finally, many art museums during the past two decades have exhibited works of olfactory art and there has been at least one notable museum exhibition explicitly treating perfumes as fine art, The Art of Scent: 1889 to 2012 at New York’s Museum of Arts and Design.

These developments raise issues that merit philosophical reflection and I will briefly state my position on several of them. To begin with, I believe the tradition stretching from Kant to Scruton that rejects odors and perfumes as a basis for serious art, claiming that they are evanescent, lack structure, or cannot express meaning, is fundamentally mistaken. Secondly, there is the problem of whether the category ‘olfactory art’ names a coherent art form or is only a term of convenience for grouping art works that involve odors to some degree. I believe the latter is the case. Thus, at one end of the spectrum, there are works like Jana Sterbak’s Vanitas: Flesh Dress for an Albino Anorexic that happened to emit the odor of rotting meat after a few days, but the smell was ancillary to the work’s main point, whereas at the other end of the spectrum there are works like Clara Ursitti’s  Self-portrait in Scent #1 in which odor is the primary vehicle of expression. Moreover, although the term ‘olfactory art’ is typically used for works shown in museums devoted to the visual arts, odors have also been used with films, dramas, and music. A notable example of ‘olfactory art’ in this broader sense, is Green Aria, (2009), a collaborative scent opera that presented an environmental narrative through a combination of electronic music, visual images and a series of odors created by a perfumer.

Finally, there is the question of whether perfumes as normally understood are to be classified and appreciated as works of contemporary art or whether they should be understood and appreciated as works of design. Given an aestheticist definition of art, there seems no reason to deny that perfumes are art works, but given a contextualist definition, even the finest perfumes are not fine art since, like fashion design, they are meant to be worn and typically circulate via different kinds of institutions than most works of contemporary art. Obviously, simply showing some perfumes in an art gallery or museum does not automatically make them into works of fine art, but requires some justificatory arguments. Many of the perfumers who have made a case for perfume as an art form have argued that perfumes are fine art because, like painting or music, they manifest harmony and beauty, but harmony and beauty are hardly central criteria for contemporary art.

Yet, there are some perfume enthusiasts, today, who write blogs that discuss certain niche perfumes more for their unconventional olfactory qualities than for their beauty and harmony, or their wearability. Hence, even though the typical commercial perfume remains a work of design art, there is a close proximity, if not overlap, between some of today’s niche perfumes and the perfume-like scents created or commissioned by contemporary artists.

Larry Shiner is Emeritus Professor of Philosophy, History, Visual Arts at the University of Illinois, Springfield. His areas of study include philosophy of art, the Enlightenment, Greek philosophy, and philosophy of history. He is the author of the article 'Art Scents: Perfume, Design and Olfactory Art', recently published in British Journal of Aesthetics.

When the movie is not like the book: faithfulness in adaptations