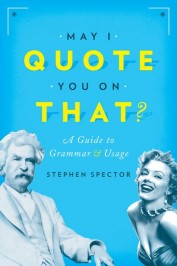 May I Quote You on That?: A Guide to Grammar and Usage

Anyone who saw the terror on the faces of the people fleeing the attacks in Paris last week will agree that terrorism is the right word to describe the barbaric suicide bombings and the shooting of civilians that awful Friday night. The term terrorism, though once rare, has become tragically common in the twenty-first century. So it may seem surprising that there’s no legal agreement about what terrorism actually is.

The word terrorism first appeared in English in 1795, referring to the Reign of Terror during the French Revolution. As Alex P. Schmid notes, in 1793, the revolutionary leader Maximilien Robespierre and the delegates to the French National Convention had decided that terror through repression and bloodshed was legitimate state policy. By 1794, however, the delegates had begun to fear that Robespierre would turn on them. They accused him of a criminal abuse of power, which they called terrorisme, and they sent him to the guillotine. Thus in late nineteenth-century France, terrorism became a legal instrument of the state.

Nowadays many people think of terrorism as an illegal tactic used by non-state groups and radicalized lone wolves. However, a government’s funding of acts of terror committed by groups not under its control can also be thought of as terrorism. So can state-sponsored torture or other kinds of illegal oppression. Seen in that light, an understanding of terrorism becomes more complicated.

Instead, there are hundreds of definitions of the term focusing on its different facets. They often stress that terrorism targets civilians and non-combatants. That may seem self-evident, but there are problems with that definition, as Virginia Held points out: Does it mean that the 9/11 attacks on the World Trade Center were terrorism because they killed civilians, for example, but the one on the Pentagon wasn’t because it targeted the military?

Understandings of terrorism emphasize other aspects as well: Terrorism disregards the rules of war. It’s asymmetric, involving the weak vs. the strong, the armed vs. the unarmed, etc. Sometimes it’s used to provoke an over-reaction, other times to avenge a perceived wrong or to undermine public order and security. Terrorism is typically premeditated.

Definitions of terrorism also stress that it’s normally intended as a message meant to influence an audience, with the aim of advancing a political, social, or religious goal. Supporters of the Islamic State, which has claimed responsibility for the recent atrocities in Paris, say the attacks were revenge for French airstrikes in Syria, and for insulting the Prophet Muhammad. ISIS claims that they chose Paris to attack because it is “the capital of abominations and perversion.” Their larger goal was presumably to spread fear in order to intimidate France into ending its role in the American-led military action in the Middle East. Or they may have the opposite intent: to draw Western nations, as well as Russia and Hezbollah, into a final battle in Syria, where, according to the Islamic State’s apocalyptic theology, the “crusader armies” will be destroyed. It can be difficult to decipher intention from acts of violence.

Who gets to decide what is terrorism, as opposed to legitimate opposition to an oppressive government? What distinguishes terrorism from assassination or guerrilla warfare? And who are noncombatants? People have disputed these points for decades.

That’s because terrorism is a loaded term that stigmatizes and delegitimizes a group, with legal as well as moral consequences. Dissident organizations usually reject the term terrorist, even if they use violence against civilians. Instead they choose words like revolutionary, freedom fighter, or martyr. Journalists may refer to them as militants or suicide bombers. An autocratic government may call all opponents terrorists in order to elevate itself morally and justify a severe crackdown. And state officials normally don’t say that their own forces have committed acts of terrorism. When soldiers kill a large number of innocent civilians, government or military spokesmen may call it collateral damage. The mainstream media may label an extreme case an atrocity. But they rarely use the word terrorism to describe their own government’s actions.

These semantic fine points have little significance, of course, for the extremists who kill, the maimed who survive, and those who mourn the dead. The militants find meaning instead in radical interpretations of holy texts. The injured and those who have lost loved ones are left to seek meaning in a world blown apart by vengeance and religious conviction.

Stephen Spector is a professor of English at Stony Brook University. He is the author of May I Quote You on That? A Guide to Grammar and Usage.