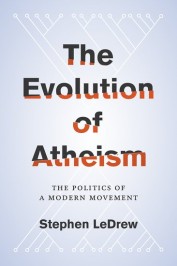 The Evolution of Atheism: The Politics of a Modern Movement

The ten-year anniversary of the publication of Richard Dawkins’ The God Delusion is approaching, and it has already been over ten years since Sam Harris published The End of Faith. These two figures, along with the late Christopher Hitchens, are the most important in the anti-religious movement known as the New Atheism. A few years ago, they were a ubiquitous presence on cable news and talk shows, but recently they’ve somewhat faded from the spotlight (a notable exception was Harris’ heated and highly publicized argument with Ben Affleck on Real Time with Bill Maher last year). At the peak of their public visibility, their fans heralded them as representatives of a dawning new age of reason that would finally put an end to superstition and religious ignorance, while their detractors either counter-attacked them as dogmatic evolutionists or dismissed them as yet another ephemeral anti-religious blip on the radar of history.

The ones who dismissed them as insignificant were wrong—and academics who obsessively reject the idea of secularization are some of the worst offenders in this regard. Social science in general has not yet fully appreciated the significance of the New Atheism and has tended not to take it very seriously, with the exception of those working in the new sub-discipline of secularity studies. But whatever one might think of the New Atheists’ ideas, an honest appraisal would recognize that they have had a significant and lasting impact.

The most obvious evidence of this is the growth and increasing visibility of the atheist movement in America. Fashioning themselves as the last frontier of the civil rights movement, atheists have pushed their way into mainstream American culture by adopting a minority identity and mimicking the strategies of the LGBT movement. Their “coming out” and “Good Without God” campaigns encouraged atheists to tell their friends and neighbors about their non-religious identity and show the country that they are good, moral people. To illustrate their outsider status, they have frequently pointed to surveys indicating that most Americans would rather see a Muslim or a homosexual than an atheist as President.

But they aren’t the outsiders they used to be. A 2015 Gallup poll found, for the first time, that a 58% majority of Americans would be willing to vote for an atheist candidate, and “atheist” is no longer at the top of the list of characteristics that would be a deal-breaker for voters (that spot is reserved for the dreaded “socialist”). Revealing the general demographic shift in views about religion, 75% of those in the 18-29 age category said they would vote for an atheist—precisely the same number who said they would consider voting for an evangelical Christian. It appears that atheist activism may be having the desired effect, especially among young people, though this could also simply be related to a more general trend: people moving away from organized religion. The proportion of Americans who claim no religious affiliation has spiked sharply in recent years, growing from 16% in 2007 to 23% in 2015, with the number soaring to 35% among Millennials. While atheists and agnostics constitute a smaller subset of that group, their numbers are also growing.

The New Atheists might not be responsible for all of this (though they may be for some of it), but we can say that they’re a symptom of some significant cultural changes. They should be remembered for catalyzing a movement for religious dissent and inspiring atheists to come together and find a voice in American public life. But there’s a much darker side to the legacy of the New Atheism that stems from its imperialist and xenophobic tendencies, to say nothing of some thinly veiled Social Darwinism and arguments for eugenics. Sam Harris in particular is now known more for supporting the Israeli occupation of Palestine and ethnic profiling at airport security than for his science-based critique of religious faith. Richard Dawkins’ personal legacy has taken a heavy hit in the past few years, as his rambling criticisms of feminism and Muslim “barbarians” on Twitter have led to charges of sexism, racism, and general arrogance and intolerance. On many social and political issues, the New Atheists are on the same page as the Christian Right.

Many young atheists have discovered that the atheist thinkers they admired turned out to have a lot in common with the worst aspects of the religions they railed against. The result is that the movement has lost a good deal of steam, at least in its New Atheist form. Many atheists today want to move beyond bashing religion to emphasizing the more positive and constructive aspects of atheism, but there’s little agreement about what that means exactly. The conservative narrative of western cultural supremacy and science-driven social progress favored by the New Atheists and a growing constituency of right-wing libertarians has come up against a grass-roots movement of younger activists who tie atheism to ideas about equality and social justice. The dominant trend, however, is still the old militant one, which leaves younger atheist who are disillusioned with the old prophets of scientism wondering if this is the right movement for them.

For all of the differences between these groups, there is a general consensus to transition away from the New Atheism’s wildly optimistic goal of converting the world to a scientific worldview, and toward an emphasis on advancing the social standing of atheists and giving them a voice within a diverse cultural landscape. But regardless of their current standing among atheists, the fact is that the New Atheists gave life to a cultural and political movement. Perhaps they were just the trigger on a gun that was already loaded, but that doesn’t make their role any less important.

The New Atheism, ten years on, is not “new” anymore, but its ongoing influence shouldn’t be underestimated. It would be difficult to say that Dawkins, Harris, and Hitchens were causes of a cultural revolution, but they may be a sign of one. The God Delusion should be regarded as one of the most important books of the past decade if only because it’s so rare for a single book or thinker to galvanize so many people to such a degree, to say nothing of its role in mobilizing activism that would establish recognition of a new minority group in American society. This is a major accomplishment, even if religious belief doesn’t vanish any time soon.

Stephen LeDrew is a Post-doctoral Fellow at the Centre for the Study of Religion and Society at Uppsala University. He is the author of The Evolution of Atheism: The Politics of a Modern Movement.

The art of secular dying