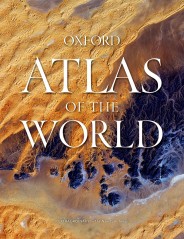 Atlas of the World: Twenty-Second Edition

Earlier in the year, Greece faced some unsettling economic troubles. The country voted on a referendum that would decide whether they would pull their membership from the European Union (and thus, the union’s currency and economic system). It’s a wonder to think that this country, less than a decade ago, was among one of the richer nations. In this excerpt from Stathis N. Kalyvas’s Modern Greece: What Everyone Needs to Know, we look at the country’s arduous path from riches to rags in the past seven years.

How did Greece go from economic boom to bust?

Things in Greece looked ideal in 2008. By most indices of economic and human development, the country was in an enviable position. It was reaching the end of a decade that had been remarkable for its robust economic growth. An average real GDP growth rate of close to 4 percent had led to a per capita GDP of $32,100 (Purchasing Power Parity, PPP), bringing Greece into the exclusive club of the forty richest nations on earth. Perhaps more importantly, Greece ranked 26th globally on the Human Development Index (HDI), which combines indicators of life expectancy, educational attainment, and income. Growth translated into prosperity, reflected in a variety of indicators, such as very high rates of both primary and secondary home ownership (in 2013, 73 percent of the housing stock was occupied by owners versus 22 percent that were rentals, while 21 percent of the total housing stock was composed of secondary homes). Social modernization proceeded apace. Fertility rates dropped from 2.4 children in 1950 to 1.4 in 1990, and the share of urban population grew from 37 percent to 59 percent during the same period. By 2011, life expectancy reached 78.3 years for men and 83.1 years for women. In short, Greece was in the midst of unprecedented material prosperity, and its politics had acquired the predictable features of a two-party system strongly anchored at the center.

Underneath the surface, however, things were far from perfect. Public opinion surveys indicated a growing malaise, expressing a combination of very low trust in most institutions and relatively low but persistent unemployment, especially among the country’s youth. Social commentators were concerned by the spread of pervasive cynicism, crude materialism, and rising corruption. A few voices also raised red flags about enduring problems in the economy, which undermined the sustainability of the economic model that had produced all this spectacular growth. They were not heard, but they were right: the amazing expansion of the Greek economy had a very soft underbelly. It was based mainly on domestic consumption, fanned by a loose fiscal policy made possible by the influx of foreign capital following the liberalization of the financial sector and, more than anything else, a set of factors related to Greece’s membership in the Eurozone.

It would be wrong to describe all of the Greek economy’s growth as a bubble. Exports grew considerably during this period, although imports grew much faster. Portugal, facing similar incentives and eventually a similar bust, did not experience similar growth. Nevertheless, Greece’s underlying weakness was visible in a variety of areas, including numerous obstacles to competition in key sectors of the economy such as energy and transportation; persistent difficulties in the ease of doing business; many barriers to entrepreneurship; the relatively poor quality of education as measured by standardized scores in science and mathematics; low levels of spending on research; and rampant corruption in the public sector.

In many ways Greece presented a paradox: it was an advanced European economy with a per capita GDP that placed it among the wealthiest countries, but it also displayed some institutional features resembling those of the emerging economies of the developing world. Greece was a country populated by well-heeled households, featuring high individual consumption, good quality-of-life indicators, and reasonable levels of spending on infrastructure and public services, but also dysfunctional institutions and a lack of a sophisticated and competitive business sector. It looked a bit like a country rich in natural resources. So long as the Greek economy boomed, these problems could be ignored. But then the subprime crisis erupted in the United States, in 2008. Initially, the prevailing feeling was that the crisis would skip Greece. Indeed, Greek banks were not exposed to toxic assets from the United States. As a result, they were able to attract considerable deposit flows in the aftermath of the US crisis, peaking in June 2009. Then all hell broke loose.

Make sure to cast your vote on the shortlist for Place of the Year 2015 by 30 November.

The only world atlas updated annually, guaranteeing that users will find the most current geographic information, Oxford's Atlas of the World is the most authoritative atlas on the market. Providing the finest global coverage available, the Atlas of the World is not only the best-selling volume of its size and price, but also the benchmark by which all other atlases are measured.

Stathis N. Kalyvas is Arnold Wolfers Professor of Political Science and Director of the Program on Order, Conflict, and Violence at Yale University. He is the author of The Logic of Violence in Civil War and The Rise of Christian Democracy in Europe, and the co-editor of Order, Conflict & Violence. He has received several awards, including the Woodrow Wilson Award for best book on government, politics, or international affairs, the Luebbert Award for best book in comparative politics, the European Academy of Sociology Book Award, the J. David Greenstone Award for best book in politics and history, and the Gregory Luebbert Award for best article in comparative politics. He is the author of Modern Greece: What Everyone Needs to Know.