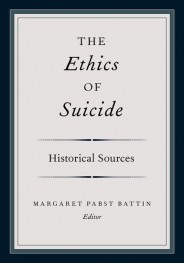 The Ethics of Suicide: Historical Sources

Five states have now legalized “Death with Dignity”: Oregon, Washington, Montana, Vermont, and most recently, the most populous state in the US, California. By 2016, when the California “End of Life Option Act” goes into effect, 1 in 10 Americans will live in jurisdictions in which it is legal for a physician to prescribe a lethal drug to a terminally ill patient who, under a variety of safeguards, requests it. Opponents label this “physician-assisted suicide”; proponents use terms like “self-deliverance,” “physician-assisted dying,” “aid-in-dying,” and “hastened death.”

But what’s the right term, really? After all, much of the political disagreement and legal wrangling over this issue is rooted in this fundamental conceptual question, is “physician-assisted suicide” really suicide?

Let’s see if we can figure it out.

Which of these cases is suicide? A heartsick teenager slits her writs, stung by rejection from a boyfriend. A middle-aged businessman, shamed by failure in an economic downturn, hangs himself in the basement. An older man shoots himself with the gun he’s had in his home for years to protect himself and his family.

These are all suicides, we say.

Again, which of these following cases is suicide? A Buddhist monk immolates himself to protest a repressive political regime; he has trained himself for this moment for years. A Jehovah’s Witness, heeding her religion’s teaching, refuses a blood transfusion after a serious accident; she dies. A sea captain goes down with his ship. Socrates drinks the hemlock after he is convicted by the Athenian court, even though he could easily have avoided conviction and though he could easily have escaped from jail.

Are these suicides? We’re a little less certain about what to call them.

So what about these? A soldier falls on a grenade, saving his buddy. Samson pulls the temple down on himself as well as on the Philistines. The pilot of a small jet plane whose engine is failing deliberately crashes it into an open field, rather than bailing out and letting it hit the crowded schoolyard ahead; he dies, but the children survive. Jesus is nailed to the cross.

Are these suicides? No, we insist, they are absolutely not suicides, they are clearly acts of heroism, of goodness, of faith.

Well what about these, the very kinds of cases that are at issue in Death with Dignity, or, as it is also called, physician-assisted suicide? An ALS patient refuses a ventilator when the disease finally paralyses his diaphragm and he can no longer breathe on his own, and he requests medication to prevent air hunger, pain, and anxiety as he dies; these, as he knows, will make his death come sooner than otherwise. A terminal cancer patient, who lives in a state where assisted dying is legal under its Death with Dignity Act, asks her physician for a prescription for a lethal medication and, some time later when the symptoms of disease progression are more pronounced, takes it and dies.

How do these compare with the cases we’ve just been exploring? What makes something suicide?

Is it about causation? The lovesick teenager, the shamed businessman, the Buddhist monk, Samson, Socrates, the soldier who fell on the grenade—all of them caused their own deaths. We count some as tragedies, some as acts of courage, and some as religious or philosophical heroism. Just the same, all of these people took deliberate actions that resulted directly in their deaths.

Or is it about intention? Did any of these people want to die? Did the lovesick teenager really want to die, or rather to get even with the rejecting boyfriend, even if she knew she could hurt him worst by dying? What about the failing businessman—did he want to die, or was dying the only way he could see to avoid humiliation? The sea captain? He acted to honor a seafaring tradition, surely, but did he do so in order to die? The self-immolating monk? His difficult, public act isn’t about wanting to die, but wanting to see the political regime changed. The jet pilot didn’t want to die either, but he wanted to kill the children even less: hence he knowingly, voluntarily, indeed heroically acted in a way that spared them but caused his own death. Jesus? John Donne, the 17th century poet and dean of St. Paul’s, argues—contrary to the entire Christian tradition—that Christ was a suicide, albeit a quintessentially admirable one, done for the glory of God.

This brings us to the present: what about the ALS or the cancer patient? Like these others, neither wanted to die—they had been making every effort to avoid dying as they went through the medical treatment available. But now, given that they already dying anyway, what they chose was to avoid the more difficult ways of dying that were clearly in their futures.

One noisy objection heard over and over again is that we cannot tolerate this practice: it is wrong because it is suicide.

So what should we call Death with Dignity? If you focus on the hand lifting the glass to the mouth and then swallowing the lethal medication, that is, on the mechanics of physical causation, Death with Dignity may look like suicide. If, on the other hand, you focus instead on the patient’s intention, it looks like self-preservation, self-protection from a future that could be much worse. Partisans on one side of the issue, the opponents of legalization, tend to focus on the mechanism of causation—this is what provides the rationale for calling it suicide; proponents in contrast tend to focus on the intention under which the patient acts, to protect oneself from a worse fate, to be able to preserve one’s cognitive capacities, to bring a life to a bearable close in the presence of those one loves. Seen in this way, it isn’t suicide at all.

This duality explains much of the way we label life-ending acts: when we focus on mechanism we call them suicide, but when we focus on intention we give those of which we approve of the intention much more favorable labels. The lovesick teenager? We focus on mechanism—she slit her wrists—and so label it a suicide. The failing businessman? He hanged himself, and so he too is a suicide. The Buddhist monk? We see it both ways: he lit the match, but he did it for a noble reason: some might call him a suicide of social protest; Thich Nhat Hanh insists the self-immolating monks and nuns were not suicides at all. Was Samson a suicide? that’s surely not the scriptural interpretation; we would call it self-sacrifice for a religiously important reason, a champion of his people. And Jesus? To call him a suicide, as John Donne well knew, was tantamount to heresy. But it’s the same for the soldier falling on the grenade—we don’t focus on the mechanism of his death, but primarily on his reason for doing it: he counts as a hero, saving his buddy. It’s the same too for the pilot of the failing jet, and even though he knowingly, deliberately pitched the nose down and banked away from the school, it is his reason for doing so, sacrificing his own life to save the children, that makes us count him a hero. To label him a suicide, which, if we were to speak in terms of mechanism, he clearly would be, would deeply offend our moral senses.

So how should we see the patient dying of ALS or cancer who takes a medication that ends his life: in terms of mechanism (swallowing the pills), or in terms of intention, as an already-dying human being making a difficult but understandable, even praiseworthy choice to spare himself and others around him? Whether we call him a suicide would invite some to call him a sinner; if we avoid this pejorative label, we could call him courageous, self-sacrificing, even saintly instead.

The word “suicide” wasn’t invented until the middle of the 17th century. But earlier thinkers reflected on whether it could ever be acceptable to end one’s own life. Plato thought yes in the specific situations of judicial execution (like Socrates’ drinking the hemlock himself), disgrace, and the “stress of cruel and inevitable calamity,” but he thought no in cases of “sloth,” what we’d probably call depression—and “want of manliness” or cowardice. Aristotle thought no, suicide was wrong: it is an injury to the state. The Stoic philosophers thought that reflective, responsible suicide was the act of the wise man; Roman generals expected themselves to fall on their swords if they could no longer defend their causes. The early Church fathers debated whether a virgin might kill herself to avoid rape or a Christian witness to avoid apostasy; some held yes, some argued no. Augustine and Thomas Aquinas solidified the Church’s position against suicide, arguing that it was a sin worse than any sin that could be avoided by it. David Hume argued in defense of suicide; Immanuel Kant argued against it, though he acknowledged the possible exception of Cato. Nietzsche insisted that the sick man was a “parasite” of society and ought to “die at the right time.”

In the West, the discussion of the ethics of suicide effectively ended at the time Durkheim and Freud, who argued respectively that suicide was the product of social organization or psychopathology, and so not an ethical issue at all. That silenced things for a while. Now, however, we are faced with a practical question of labeling, as the ethical issues erupt again in the tension over the role we may play in our own dying, and what we should call it when we play an active role in how our deaths go.

Death with Dignity? Aid-in-dying? Is it suicide? What we call it makes an enormous political difference in the debates about the legal change. Terminally ill people would not have survived very long before the advent of modern medicine; we cannot know what the great earlier thinkers would have said about cases like these and we cannot appeal to the long history of our cultures: they are too varied in their views to give us a unique answer. This is a contemporary problem: it is the very existence of modern medicine that gives rise to the dilemma of whether to endure the very, very long downhill slope that may lead to what can be a difficult death, or take earlier steps to bring our lives to an easier end. This is a personal and societal choice to be taken reflectively, not decided in advance on the basis of slanted language.

Like the debates about abortion, “little tiny babies” on one side, “fetal tissue” on the other, slanted language often hijacks our thinking. The next, most important step in resolving these controversies is to move beyond the issue of whether physician aid-in-dying is suicide and think instead about intentions, about choices, about what range of options we want, what roles we want to be able to play in our own eventual deaths. We know how somebody else’s political or religious beliefs can highjack our options; we need to recognize that somebody else’s language can highjack our options too. If we call it by the most neutral term, “physician assisted dying,” we can reduce much of the tension over matters so important to our own personal futures.

Margaret Pabst Battin is Distinguished Professor of Philosophy and Adjunct Professor of Internal Medicine, Division of Medical Ethics and Humanities, at the University of Utah. She recently edited The Ethics of Suicide: Historical Sources (OUP, 2015).