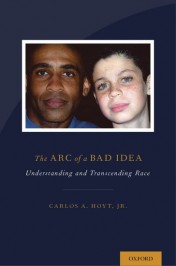 The Arc of a Bad Idea: Understanding and Transcending Race

On 6 November 2015, the New York Times featured a poignant five-minute documentary called “A Conversation About Growing Up Black,” produced by Joe Brewster and Perri Peltz. Brewster and Peltz present Rakesh, Miles, Malek, Marvin, Shaquille, Bisa, Jumoke, Maddox, and Myles. The youngest are 10 and the eldest is 25 years old. These nine individuals are very different from one another (hair, height, weight, skin color, voice, manner of speech, body language… all those things that combine to make each of us unique). As with all human beings, each of them is his own universe of individuality and each occupies several universes of other individuals known as family, friends, teammates, school mates, colleagues, and the like.

But we never learn much about the individuality of these individuals: where they live; where they go to school or work; what their worldviews might be on faith, politics, or the environment; what are their talents, their challenges; what they love, and what they dislike. Instead we are introduced to them as racialized human beings, adversely racialized nominally black males to be specific, who by dint of this social relegation are subject to suspicion, discrimination, degradation, and brutality.

We encounter them as living, breathing targets of racism.

We are graced with their eloquent and compelling meditations on racism, their narratives of being misrepresented, misunderstood and mistreated, and their heroic resolve to successfully navigate the mine-infested landscape of the racist country in which they live – for themselves and for their loving, protective, and worried parents.

It is a heartbreaking five-minutes of film.

And it will change nothing.

Racialization is the process by which races are fabricated. (The concept as utilized here is an adaptation of the concept defined in the Report of the Commission on Systemic Racism in the Ontario Criminal Justice System.) It entails the following steps:

To end racial strife we must stop racializing others and stop racializing ourselves. Racialization is the mortar that holds together the edifice of racism, whether manifest at the intrapersonal, interpersonal, structural, institutional, or systemic level.

What might it look like to dissolve the mortar of racialization? Let’s take two statements from Brewster and Peltz’s “A Conversation About Growing Up Black” video.

(1) Brewster and Peltz writing within the racial worldview:

“Imagine strangers crossing the street to avoid you, imagine the police arbitrarily stopping you, imagine knowing people fear you because of the color of your skin. Many of this country’s young black men and boys don’t have to imagine.”

An alternative in a nonracial worldview:

Imagine strangers crossing the street to avoid you, imagine the police arbitrarily stopping you, imagine knowing people fear you because of the color of your skin. Despite the fact that relegating people to racial subgroups has long been known to be specious, many of this country’s nominally black men and boys don’t have to imagine.

(2) Brewster and Peltz writing within the racial worldview:

“In this Op-Doc video, “A Conversation About Growing Up Black,” we ask African-American boys and young men to tell us candidly about the daily challenges they face because of these realities. They speak openly about what it means to be a young black man in a racially charged world and explain how they feel when their parents try to shelter and prepare them for a world that is too often unfair and biased.”

An alternative in a nonracial worldview:

In this Op-Doc video, “A Conversation About Growing Up Racialized,” we ask adversely racialized young men to tell us candidly about the daily challenges they face because of the imposition of a false and stigmatized identity. They speak openly about what it means to be seen as members of a factitiously inferior human subgroup and explain how they feel when their parents try to shelter and prepare them for a world that is governed by the lethal absurdity of race.

While it is quite natural in terms of social convention for the producers of the video to write about their subject in racialized terms, it is quite unnatural in terms of biological and genetic reality. Because our systems and signals of meaning are facilitated, bound together, nourished, and shaped by the words we use, this shift in the language of race is not mere semantic maneuvering. Every time we matter-of-factly invoke the concept of race as a legitimate way of characterizing a human being, we further reify and concretize the illusion of subspecies within the one human species, and we savagely diminish complex individuals to one-dimensional targets. Use of the language of race has become so commonplace that it seems impervious to change. Calls to stop using the word “race” seem futile, if not heretical or dangerous (almost sure to provoke vehement knee-jerk rebukes and charges of dangerous colorblindness and post-racial fantasizing). Referring to individuals as members of races seems too deeply rooted and intertwined in popular and technical parlance to be retired. We seem trapped within the racial worldview. But we are not.

Towards the end of the video, Maddox, age 10, provides the following assurance to the world: “I want people to know that I am perfectly fine and I’m not going to hurt anybody or do anything bad.” Rakesh, also age 10, expresses the same simple, liberating, nonracial worldview principle so famously intoned by Martin Luther King Jr. over fifty years ago: “I should be judged about, like, who I am and, like, and what kind of person I am.” Neither of these individuals refers to himself as a “black” person.

To be clear, for all I know, each of these boys might very proudly embrace a sense of racial identity that simply was not expressed in these parting statements. What’s important to note is that they did not seem to feel a need to self-racialize in their expressions of the universal human desires to be trusted and appraised on the basis of being a fellow human being – nothing more, nothing less, nothing other.

While it is quite necessary to relentlessly make all possible efforts to prevent, understand, and, as with this video, document the effects of racism, efforts that reproduce the reification of false differences (versus the effects of perceptions, beliefs and behaviors predicated on false differences) can never be sufficient. We must add to all efforts to quell racism a dedication to quit racialization and the racial worldview.

Carlos Hoyt is the author of The Arc of a Bad Idea: Understanding and Transcending Race. He holds teaching positions at Wheelock College, Simmons College, and Boston University in Boston Massachusetts, and has authored peer-reviewed articles on spirituality in social work practice and the pedagogy of the definition of racism. He explores race, racial identity and related issues as a scholar, teacher, psychotherapist, parent, and racialized member of our society, interrogating master narratives and the dominant discourse on race with the goal of illuminating and virtuously disrupting the racial worldview. Additional information on The Arc of a Bad Idea and Carlos’ work and views in this area can be found at Race Transcenders.