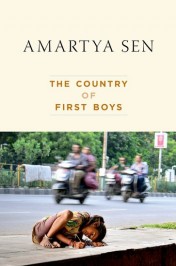 The Country of First Boys

Nobel laureate Amartya Sen, author of The Country of First Boys: And Other Essays talks to Amrita Dutta from The Indian Express about why inequality persists, his educational experiences, and his love for Sanskrit literature.

Could you talk a bit about your love for Sanskrit literature? What sense does it give you of ancient Indian culture?

Sanskrit and maths were my favourite subjects in school. When the Nobel academy asked me to donate two items to its museum, I gave them Aryabhata’s book on maths, Aryabhatiya, which I had read in Sanskrit in school, and my bicycle. The bike I had used to collect data about the famine period. I would ride to farms in Bengal and get them to open their dusty rooms where they had kept their records. I used it even more while researching on gender and inequality, when I would go to villages near Santiniketan to weigh boys and girls under the age of five. (By the time girls were five, they had fallen behind in terms of weight.) I was very proud that I had become quite good at weighing children. I had a very good research assistant, the first Santhal in her village to get a BA. On one occasion, she called me to help her weigh a teething child. And I did it without getting bitten.

I get an extraordinary positive impression of the past, which makes me very proud. I get an impression of a very cerebrally active society — never as remarkable as the Chinese in observational science — but in the philosophy of science, and the speculation of it, very high brow. On the philosophy of jurispredence. In fact, my book Idea of Justice is based on a distinction that only Sanskrit scholars make, between niti and nyaya. I think Kalidasa’s Meghdootam is extraordinarily important to understanding Indian culture. But my favourite play is Shudraka’s Mricchakatika — and it had a profound influence on my understanding of justice.  I also like the Vedas, and I don’t think you have to be a passionate believer in Hindutva to like it — it is a great book. People don’t even recognise that it is not just a book on religion but also a book on human behaviour. Some of the verses are absolutely overpowering. But I don’t at all accept the view that the Vedas had interesting mathematics. It had some arithmetic puzzles, that is all.

When you started analysing women’s health and education with respect to economic growth, in the 1960s, what were the reactions?

I became interested in gender equality when I was in college at Presidency, Kolkata. Marx’s idea of false consciousness, I thought, applied to women. I also did a few papers when I was teaching in Jadavpur University. I was amazed not just at the inequality but the fact that people knew about it and took it for granted. Secondly, if you drew their attention to it, they would give you lectures about culture. I was told that this was a Western point of view, that Indian women do not think of themselves as individuals, but as an extension of their families. I had an argument at the Delhi School of Economics in the 1960s, and I said this was a form of ultimate denial of a person’s individuality, which is one of the huge possessions we have. That is the way inequality survives, by making underdogs become upholders of the inequality.

You have lived all your life on university campuses, haven’t you?

You have written for decades on India’s education. What was your experience of school like?

I was very lucky because I went to a very nice school in Santiniketan. [Before that], I had a little over a year at St Gregory’s School in Dhaka, which was very keen on performance. After I got the Nobel, I visited the school. The headmaster said they had started a few scholarships in my name. He also said he got out my old exam scripts to inspire the students. Inspire, I said? ‘That was my hope,’ said the headmaster. But then he checked that my position in class was 33rd in a class of 36, and he wondered whether it was a good idea.

I have to say I became a relatively good student once I went to Santiniketan, where no one worried about grades, it was almost shameful to worry about them. One of my teachers described a classmate of mine: “She is quite an original thinker, even though her grades are very good.” I liked that aspect: there was no pressure to be a first boy.

Not only were there girls with me (I was in school in the 1940s) but my mother was also schooled there earlier. She was proud of the fact that she did judo there, 90 years ago. She must have been one of the first Indian women to do judo. She had a Japanese teacher, who for the first week, only taught them how to fall without hurting themselves. In some ways, the idea of what happens to those who fall seems to me not just an approach fit for judo, but for humanity at large—and for social policy.

A version of this article originally appeared in The Indian Express. An extract is reprinted here by permission.

Amrita Dutta is a reporter for The Indian Express.