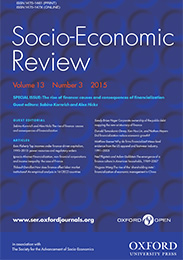 Socio-Economic Review aims to encourage work on the relationship between society, economy, institutions and markets, moral commitments and the rational pursuit of self-interest.

The fading role of the corporation as the exclusive institutional locus for the generation and exploitation of technological knowledge has recently brought the academic system back to center stage of analysis of the determinants of economic growth. The wide consensus on the centrality of the academic system as a crucial engine for the generation of knowledge – the basic engine of economic growth – has also called increased attention on its accountability and the assessment of its efficiency.

Policies aimed at fostering economic growth through public expenditure in tertiary education should be better aware of the different contribution of each specific academic discipline. Rather than introducing measures affecting the allocation of resources in the broad spectrum of academic knowledge, policies might instead introduce ad-hoc measures to foster specific disciplines, for example through differentiated enrollment fees for students.

Two distinct notions of efficiency apply in this context. Internal efficiency accounts for the relationship between the resources invested and the output produced at the academic system level. External efficiency accounts instead for the relationship between the resources transferred to the academic system, their output in terms of knowledge, and its effect on the output of the economic system at large, primarily in terms of increased levels of productivity.

Some kinds of scientific knowledge, and more specifically some disciplinary fields, are fundamental resources for the generation of technological change and, ultimately, also economic growth.

The literature that studies the economic features of knowledge has made it possible to understand that knowledge should not be considered as a homogenous basket of an undifferentiated good. Knowledge differs on many counts. A crucial difference concerns the capability of the different types of knowledge to support the introduction of innovations to the economic system. Some kinds of scientific knowledge, and more specifically some disciplinary fields, are fundamental resources for the generation of technological change and, ultimately, also economic growth. This is due to the fact that this type of knowledge can be applied fruitfully to very different domains; it can be easily recombined to generate further new technological knowledge and it often allows those who generate it to retain the economic value of their inventions. In this respect, this type of knowledge can be considered as intangible capital or intermediate input able to actually foster technological change. Other kinds of knowledge instead have a much narrower scope of application and do not provide substantial economic returns for those who generate it. This latter type of knowledge shares instead the characteristics of final goods able to affect the utility of final consumers.

Using data from several OECD countries on research and development expenditures in higher education, and combining it with the number of university graduate students in different disciplinary fields, we find that there are important differences in the contribution of these fields to economic growth. Hard sciences and social sciences contribute more to economic growth than, respectively, medical sciences and human sciences.

This sheds some light on the crucial issue of the intra-academic and interdisciplinary allocation of the resources devoted to the academic system as a whole. It seems more and more important to call attention on the differences among academic fields in terms of their actual capability to contribute economic growth. It seems worthwhile exploring and carefully assessing which fields deserve more funding than others, as long as public funding is advocated to support economic growth.

Public policy can subsidize academic research for several reasons that might have little to do with economic growth. Moreover, economic growth is only one of the possible measures of external efficiency of the university system; an academic system might display very high levels of non-economic external efficiency that could be measured by other indicators, such as incidences of disease, life expectancy, achievements in human rights, and the relationship between leisure and work time. However if and when subsidies of the university system are advocated as a means to enhance economic growth, then public support of the academic system should focus on the academic fields that are better able to contribute to economic growth. Policy guidelines should be fine-tuned to this necessity and, on the demand-side, might introduce incentives for students to enroll in specific academic fields, through differentiated fees for example.

Cristiano Antonelli is Professor of Economics at the University of Torino, and a Fellow at  the Bureau of Research on Innovation, Complexity and Knowledge (BRICK) at the Collegio Carlo Alberto. Claudio Fassio is a Postdoctoral Fellow at the Center for Innovation, Research and Competence in the Learning Economy (CIRCLE) and at Lund University, and a research affiliate at BRICK at the Collegio Carlo Alberto. Their article "Academic knowledge and economic growth: are scientific fields all alike?" is published in Socio-Economic Review.