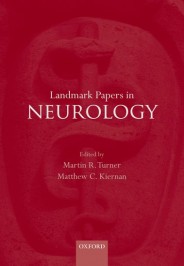 Neurology is fairly new field that has made incredible strides over a relatively short span of time, thanks in large part to major advances in technology. Public interest in the inner workings of the human brain is constantly on the rise, with neurologists and their groundbreaking research on the forefront. To mark the release of Martin R. Turner and Matthew C. Kiernan’s Landmark Papers in Neurology, we spoke with the two editors, to discuss their thoughts on neurology – past and present.

What were the origins of neurology as a specialty and the understanding of neurological disease?

Turner – Neurology was quite a late speciality and many of the 19th century pioneers would have called themselves general physicians, anatomists or pathologists. Regrettably, it was the preserve of only relatively rich males in the early years. They were great observers of patients in life and then related it to the detailed anatomy of their bodies after death. Everything was recorded and published in rigorous detail. Patterns were spotted that told us far more about the clinical breadth of neurological conditions than modern diagnostic equipment has done to date.

How has the understanding of neurological diseases improved in the last ten to twenty years?

Turner – In my own area of neuroimaging, it is staggering how things have developed. The ability to see the brain structure without opening the skull changed everything almost overnight. MRI scanners were science fiction a few decades back, and the latest applications would not have been dreamt of when the first grainy black and white pictures first emerged. The explosion in molecular biology, at the genetic and cellular levels, is leading to a complete reclassification of disease. This is colliding with the traditional view of Medicine, defined by Osler, in which diseases are classified according to clinical methods. In fact, both will necessarily develop in tandem.

Kiernan – Most importantly, we are now living in a therapeutic era. That maxim is no better illustrated than by considering multiple sclerosis and neuro-inflammation more generally. The transformation has been remarkable. With a rapidly developing armamentarium of immunomodulatory medications, the outcomes for patients diagnosed with MS today is significantly better than it was twenty years ago.

What are some of the most major milestones in the evolution of neurology?

Turner – Pondering this was the basis for the first ‘technological’ chapter, which Matthew and I decided to take on, with our good friend Kevin Talbot. We identified three broad areas, namely i) imaging the nervous system (from brain to nerve cell), ii) understanding the neurophysiology of the nervous system, and iii) its molecular biology. We each took on the part in which we do most of our research.

Kiernan – Neuroscience research and clinical development is now largely dependent on the technology of the day. While Charcot was limited to pathological assessment, obtained through post mortem examination, we are lucky to be living in an era of unprecedented technological advance. With that comes the hope that better treatments will become available for our patients. With significant developments across electronic media, and planned changes in free and open access for all medical research, the traditional textbook and medical journal approach may begin to have less meaning. Clinicians and emerging clinicians, whilst previously having turned their attention to their favourite journal, may now be more engaged with Facebook and Twitter – and of course their favourite blogs!

Why is it important for neurology trainees to have an understanding of the historical context of their subject?

Turner – The digital medical library has brought many advantages, and all at the click of a mouse. However, though many pre-1950s papers are being added each month, it still does not allow the reader to gain a sense of context, ‘the long view’ and critical appraisal that only comes from someone immersed in a field for many years. In my own area of ALS, time and again I have gone back to the works of the original pioneers of neurology (Charcot, Gowers) and been humbled to find that they already knew much of what we arrogantly imagine has come from modern clinical practice. Other times it has made me think differently about the whole basis for neurodegeneration.

Kiernan – There is also increasing pressure on authors to cite only the recent developments in their field. Publishers of many high impact journals exhort prospective authors to cite manuscripts from the past five years. Such pressure may link in turn to the metrics of today and the dreaded impact factor. What is the true impact of medical discovery? Perhaps there has been a gradual distortion from a desire to improve patient outcomes, to considerations about generating personal acclaim and funding. As such, it is refreshing to consider discovery for discovery alone, and to hear how the key drivers of science today rate their field, irrespective of such considerations.

How do you predict our understanding will change in the next ten to twenty years?

Turner – The last 10-20 years have shown me that whatever we predict will likely be wrong! One thing is clear though, namely that neuroscience really is the next great frontier in Medicine. I hope more than anything that in my career there will be a sudden collision of Mathematicians, Physicists and Neurologists that will unlock the basic mechanics of the brain.

Kiernan – Thinking Neil Armstrong type moments, it does not seem inconceivable that paralysed patients will be able to walk, brain-implanted microchips will eradicate the need for computers as we know them, and that damaged body parts may be replaced by neuroprostheses. Who knows? But it will be an interesting journey!

Professor Martin R. Turner is a Consultant Neurologist and Senior Clinician Scientist within the Oxford University Nuffield Department of Clinical Neurosciences. His research focuses on understanding the variation in the clinical presentations of ALS / MND and developing biomarkers.

Professor Matthew C. Kiernan was recently appointed as the Bushell Chair of Neurology at the University of Sydney. He was appointed Professor of Neurology, Royal Prince Alfred Hospital (RPAH) in 2013 and Senior Staff Specialist RPAH. He is also a Senior Scientist at Neuroscience Research Australia.

Part of the 'Landmark Papers in' series, Landmark Papers in Neurology brings together the ten most important papers for each sub-speciality within neurology, covering the full range of major neurological conditions. The papers are fully summarized, and placed into a wider context; creating a coherent story of how this fascinating subject has developed over time.