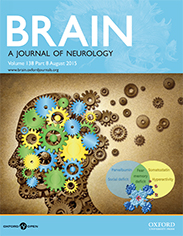 Brain provides researchers and clinicians with the finest original contributions in neurology.

It was midnight and I had just slumped into bed, exhausted after one of my first days on-call as a new intern, and still adjusting to life in a new apartment. As my nagging reflections on the day were just beginning to subside, insistent knocking at my door jolted me back to alertness. Dragging myself out of bed to open the door, I was surprised to see a diminutive elderly lady who appeared quite perturbed. She announced that she lived in the unit directly below me, and immediately questioned, “Are you playing music?”. Giving her the benefit of the doubt, I listened for this clearly infuriating music, only to be met with a stark silence. Now curious, I asked for more details about the music. However, it quickly became clear that her level of hearing impairment would make any further discussion about the nature of the music virtually impossible. She ultimately left my doorstep unsatisfied and aggravated by this mysterious persistent music. After our initial meeting, she continued to make regular visits to my apartment in an attempt to address this constant music, which soon became apparent she did not find its source in our building but rather in her mind. While I had always considered music an unequivocal source of enjoyment in life, the tricks her mind was playing had made the musical experience quite the opposite. As the music continued to plague her, she sadly seemed to slowly lose her handle on reality, along with other cognitive faculties and eventually transitioned to a memory care unit.

To further look into the association between musical hallucinations and neurologic disease, particularly neurodegenerative disorders, we reviewed the medical record at Mayo Clinic and identified 393 patients who had experienced some form of musical hallucinations as defined by the perception of fully-formed music not produced by an external auditory stimulus. We then divided these individuals into the following groups according to the condition felt to be most strongly associated with musical hallucinations: neurologic, psychiatric, focal brain lesion, drug effect and a not otherwise classifiable (NOC) category for those individuals not fitting into the other four groups.

Musical hallucinations represent the dysfunctional end of this spectrum, and offer us a unique window into the brain, highlighting the special connection between music and memory.

Unexpectedly, there were trends when looking at the types of music heard between different groups. For those in the neurodegenerative and NOC groups, songs tended to date back to childhood and were commonly religious, patriotic, or cultural. One particularly insightful lady who had isolated hearing impairment and was troubled by musical hallucinations described that she began to hear the following tunes in her head on a persistent basis: “How much is that doggy in the window?”, “The Star Spangled Banner”, and “Swing Low, Sweet Chariot,” noting that the experience was “the craziest thing.” She went on to “make light of the matter often laughing about how unusual the situation was, but alternately express[ed] extreme duress at the fact that she [could not], of her own volition make the tunes stop.” Often, those with a dementia syndrome lacked the insight that the music represented a false perception and were convinced that the neighbors were playing music too loudly. Those who experienced musical hallucinations secondary to focal brain lesions, often in the context of a musical aura preceding a seizure, heard more modern music, such as country or rock, likely not learned in childhood. In the setting of psychiatric disease, songs tended to reflect mood dysfunction, with sad or ‘scary’ music, and sometimes represented a reminder of a close acquaintance or family member who had died, as with one woman who heard the favorite songs of her late husband.

The observed differences in music heard between groups may in part be related to musical preferences with age, with older individuals favoring religious or traditional songs. However, the songs heard by the neurodegenerative and NOC groups were also distinguished by their relatively high frequency throughout a lifetime, making them overlearned. Thus, we hypothesized that they may be more vulnerable to manifesting as hallucinations when external auditory input is reduced through hearing impairment or when central auditory pathways are disrupted through neurodegenerative disease.

This study was limited by its retrospective nature and thus future prospective studies would be helpful in order to further investigate the association between neurologic disease and musical hallucinations. Oliver Sacks noted in his book Musicophilia, “It really is a very odd business that all of us, to varying degrees, have music in our heads.” Musical hallucinations represent the dysfunctional end of this spectrum, and offer us a unique window into the brain, highlighting the special connection between music and memory.

Erin Golden completed her Neurology residency and is currently in a Behavioral Neurology fellowship at Mayo Clinic Rochester. Keith A. Josephs is a world renowned neurodegenerative specialist and lead investigator of multiple R01s from the National Institute of Health. He has mentored hundreds of students including Dr. Golden. He is also the recipient of multiple prestigious international awards for his research accomplishments including almost 100 first-authored peer reviewed publications. They are co-authors of the article 'Minds on replay: musical hallucinations and their relationship to neurological disease' is published in Brain.