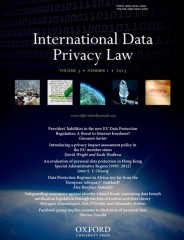 International Data Privacy Law (IDPL) is a peer-reviewed journal that combines analytical excellence with a focus on issues of practical relevance. The journal is global in scope, and thus seeks to cover data protection and privacy law topics from around the world.

Defining “privacy” has proven akin to a search for the philosopher’s stone. None of the numerous theories proposed over the years seems to encompass all the varied facets of the concept.

In considering the meaning of privacy, it can be fruitful to examine how a great artist of the past has dealt with aspects of private life that retain their relevance in the Internet age. An example is provided by the short stories of the great Russian writer Anton Chekhov (1860-1904), whose work often deals with the distinction between the public and the private spheres. Space constraints lead me to focus on only two of his hundreds of short stories.

In perhaps his most celebrated story, The Lady with the Little Dog (1899), two people engaged in an adulterous affair gradually come to realize that they have, inconveniently and unexpectedly, fallen in love, with no idea of how to resolve the situation. The society in which these characters lived made a sharp distinction between their private and public lives, and required them to keep their liaison strictly secret, as the male protagonist notes:

“He had two lives: one was the public one, which was visible to everyone who needed to know about it, but was full of conditional truth and conditional deceit, just like the lives of his friends and acquaintances, while the other one was secret. And by some strange coincidence—perhaps it was just chance—everything that was important, interesting, and essential to him, in which he was sincere and did not deceive himself, and which made up the inner core of his life, was hidden from others, while everything that was false—the outer skin in which he hid in order to cover up the truth, like his work at the bank, for example, the arguments at the club, his ‘lesser species’, and going to receptions with his wife—was public….” (quoted from Chekhov, About Love and Other Stories, translated by Rosamund Bartlett)

The value of the private realm is shown by Chekhov’s portrayal of the development of the characters’ relationship. Modern-day critics of privacy have sometimes found it to be nothing more than an excuse for concealing what is shameful or forbidden (e.g. Google’s Eric Schmdt stating “If you have something that you don’t want anyone to know, maybe you shouldn’t be doing it in the first place“).

Chekhov demonstrates the value of the private sphere by showing how it allows the development of our inner selves. In the story, the relationship between the two main characters seems like a tawdry fling at the beginning, but is revealed to be something profound and meaningful by the end. To Chekhov, the private represents what is honest and sincere, whereas the public often involves deception of both others and ourselves. I am sure he would have found that our modern preoccupation with revealing our inner selves via online services and social networks, and the merging of the public and private realms though constant online availability, has led to the loss of something valuable and particularly human.

Considering privacy as an inner realm where we can be honest with ourselves means that we must have the ability to admit other human beings into it when we need to. This theme is explored in the short story Misery (1886), where the protagonist is a sleigh driver who is forced to work in the harsh winter while in emotional anguish because of the recent death of his son. When he attempts to discuss his loss with his passengers he encounters only disinterest and ridicule, and is finally able to confide his sorrows only to his horse. This example of loneliness in a crowd puts one in mind of communication on the Internet, where it is easier to interact with an unlimited number of people than to find a sympathetic listener for one’s innermost concerns.

Chekhov values privacy because it allows a higher quality of inner deliberation, and helps us remain true to ourselves. In his view, we tend to engage in greater dissembling and rationalisation in the way we act towards others than in private contemplation. Maintaining an inner, private sphere thus allows us to hold an honest inner dialogue and to see ourselves more clearly. In addition, human beings must retain the power to determine the limits of the private realm to which they can retreat, which cannot be wholly devolved to the state, regulators, or the private sector. Privacy must enable the individual to make meaningful choices about the limits of his or her inner life.

Chekhov’s examination of private life demonstrates his sensitivity to the distinction between what we really are and what we pretend to be to other people. While these insights reflect the highly stratified society of pre-revolutionary Russia in which he lived, they are still valuable for today’s computerised and globalised world, in which we are struggling to maintain a private realm and to define its boundaries.

Dr. Christopher Kuner is editor-in-chief of the journal International Data Privacy Law. He is author of European Data Protection Law: Corporate Compliance and Regulation, and Transborder Data Flow Regulation and Data Privacy Law. Dr. Kuner is associate professor at the University of Copenhagen, an Honorary Fellow of the Centre for European Legal Studies, University of Cambridge, and Senior Privacy Counsel at Wilson Sonsini Goodrich & Rosati in Brussels.