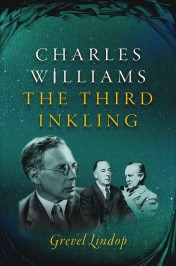 It was strikingly appropriate that Sir Geoffrey Hill should have focused his final lecture as Oxford Professor of Poetry on a quotation from Charles Williams. Not only was the lecture, in May 2015, delivered almost exactly seventy years after Williams’s death, but Williams himself had once hoped to become Professor of Poetry. And with supporters of the calibre of C.S. Lewis, J.R.R. Tolkien, W.H. Auden, and T.S. Eliot – admittedly not all of them Oxford M.A.s – Williams might well have succeeded, but for his sudden death, aged 58, in the final weeks of World War Two.

Charles Williams had come to Oxford with other staff from OUP’s London office when war broke out in September 1939. OUP then had its London headquarters (specialising in textbooks and mass market books) at Amen House near St Paul’s cathedral, too vulnerable to bombing. So when war began, the London business was moved to Southfield House, a mansion on the north-east edge of Oxford.

Williams was a central figure at the Press, running the World’s Classics and the Oxford Standard Authors, both highly successful series. But he was also a notable popular novelist, with a string of fantasy-thrillers to his credit – Buchan-style adventure tales which dealt with eruptions of the supernatural into ordinary life. Their themes now seem oddly prophetic: War in Heaven concerned the theft of the Holy Grail by a gang of black magicians; Many Dimensions was about the Philosophers’ Stone.

But Williams was also an experienced and entrancing lecturer on literature. Forged in the tough environment of London County Council evening classes, his lecturing skills included an encyclopaedic knowledge of poetry (he would quote tracts of Milton, Tennyson, or Shakespeare from memory at the drop of a hat), fervent and engaging enthusiasm, and a strikingly odd accent (North London mixed with Hertfordshire, with quirks all his own) which you either loved or hated. Most listeners – used to lectures delivered in a languid ‘upper class’ accent – were shocked and then fascinated by his harsh tones.

Wartime Oxford was short of lecturers, and Lewis immediately set about pulling strings to get Williams to lecture for the English Faculty. He began in February 1940, speaking on Milton, and the results exceeded all expectations.

Fifty years later, former students still remembered his performances vividly – ‘Mounting the steps at a bound and launching straight into a flood of quotation’; ‘telling students “Never mind what Mr. so-and-so says about it, read the text and think for yourself!”’; ‘declaiming like an Old Testament prophet or an enthusiastic evangelical preacher’; ‘Leaping from one side of the stage to the other, and acting in turn the part of each character he was talking about’; ‘clutch[ing] his copy of Wordsworth, once almost throwing it into the air, but luckily catching it again… totally absorbed in his fascination with the subject’; ‘Pacing up and down the platform… return[ing] to its centre table three times to bang on it three times with his fist to impress on his audience that “Eternity — forbids thee – to forget”’. In short, ‘Electrifying!’ Some of those students went on to become teachers of English and throughout their careers returned to their notes on those lectures for inspiration.

Lewis was so impressed with Williams’s lecture on the theme of chastity in Milton’s Comus that he declared, ‘That beautiful carved room had probably not witnessed anything so important since some of the great medieval or Renaissance lectures. I have at last, if only for once, seen a university doing what it was founded to do: teaching Wisdom.’

But Williams was also a notable poet. In 1930 he had edited the first mass-market edition of Gerard Manley Hopkins, and it had galvanised his own writing. In 1936 he had published Taliessin Through Logres, the first of a two-volume sequence on the Arthurian legends.

The poems, together with his powerfully inspiring lectures, had brought him admiration not only from his contemporaries (Auden in New York writing to say that he couldn’t wait to buy Taliessin, though ‘it would take courage’ because he didn’t know how to pronounce it!) but from aspiring undergraduate poets, many of whom were taking short courses whilst awaiting mobilisation. Drummond Allison, Sidney Keyes and John Heath-Stubbs, all at Queen’s College, read his work avidly, attended his readings at the Celtic Society and the Poetry Society, and wrote on Arthurian themes in emulation of his work. Both Allison and Keyes, after an early poetic flowering, would die, tragically, in the war; Heath-Stubbs remained a lifelong enthusiast for Williams’s poetry.

And on days when he wasn’t enjoying a lunchtime drink with the Inklings at the Eagle and Child, Charles Williams could often be found in the King’s Arms with Kingsley Amis and Philip Larkin. Less enthusiastic about his poems, both keenly attended his lectures and it was to Williams that Larkin sent the manuscript of his first novel, Jill, hoping that Williams could gain the attention of Eliot at Faber and Faber.

With retirement approaching, Williams began to consider the future; there were murmurs that the Chair of Poetry would suit him ideally; he could continue at the Press whilst lecturing, and perhaps take a college Fellowship afterwards. Not only were the Inklings keen; scholars of the calibre of Helen Gardner and Maurice Bowra were likely to back him.

Then, on 15 May 1945, it all fell apart. An old abdominal complaint suddenly recurred; Williams was rushed into hospital, and died after an emergency operation. In the turmoil of the war’s last weeks, his death passed largely unnoticed by the outside world. But literary Oxford was bereft. Hearing the news, C.S. Lewis’s brother Warnie wrote, ‘The Inklings can never be the same again.’ Another undergraduate poet and future Professor of Poetry, John Wain, heard from a fellow-student (‘she was only just not crying’) as he walked into college. Wain sensed that it was the end of an era: ‘This was a general disaster, like an air-raid… The war with Germany was over. Charles Williams was dead. And suddenly Oxford was a different place.’

Grevel Lindop was formerly Professor of Romantic and Early Victorian Studies at the University of Manchester. His previous books include The Opium-Eater: A Life of Thomas De Quincey; A Literary Guide to the Lake District; Travels on the Dance Floor, which was a BBC Radio 4 Book of the Week; and a twenty-one volume edition of The Works of Thomas De Quincey. He has published six collections of poems, and his Selected Poems appeared in 2000. His latest book is Charles Williams: The Third Inkling (OUP, 2015).