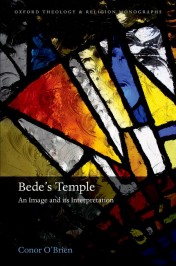 Anglo-Saxon England may seem like a solidly monochrome Christian society from a modern perspective. And in many respects it was. The only substantial religious minority in early medieval Western Europe, the Jews, was entirely absent from England before the Norman Conquest. Absent in reality, but not at the imaginative level, where the Jews played a substantial role in Anglo-Saxon culture.

Stories of Old Testament Israel were well known and lovingly re-imagined for an English audience. The epic poem Exodus, for instance, presented Moses and the Israelites as a brave band of warrior-companions, implicitly comparing them with the Anglo-Saxons themselves. Alfred the Great’s (d. 899) law code begins with the Ten Commandments, making, perhaps, the laws under which his own people lived an extension and continuation of Mosaic law. The first and greatest historian of the English, the Venerable Bede (d. 735), devoted many of his copious writings to the finer details of ancient Jewish religion, particularly to the Temple in Jerusalem

In the past many argued that the Anglo-Saxons cared so much about the Jews because they modelled themselves on them. Had they themselves not come to and conquered a promised land, Britain, after a long journey? Some scholars have suggested that the early English thought that they were God’s new Chosen People and that an intellectual like Bede actually wrote so that his people would know how to fulfil their elect status as successors to the Jews of old.

Certainly in modern times some of the more, shall we say, eccentric approaches to Anglo-Jewish connections have drifted into such territory. Since the late nineteenth century there have been a few people willing to believe that the inhabitants of England are the ten lost tribes of Israel and that the royal family descends from the House of David. Needless to say, Bede and Alfred were far too good scholars to make such fantastical claims! But I don’t think they thought of themselves as the Chosen People in any non-genetic fashion either.

Bede emphasised that the Church to which Christian Anglo-Saxons belonged encompassed both Jews and gentiles; it was therefore a universal body, including all peoples who accepted the one God. The worship of that God was also an ancient tradition: long before the pagan Anglo-Saxons first arrived in England, the Jews had recognised and worshipped Him. Bede passionately evoked a sense of brotherhood between those ancient Jews and his contemporary Anglo-Saxons through a shared religious faith. He told his countrymen that though they were not descended biologically from Aaron, the first Jewish High Priest, they did descend from him “by believing in Him in Whom Aaron also, with the holy people of his time, believed”. The Anglo-Saxons had only begun to accept Christianity less than a century before Bede was born – for them it was a new religion. By writing about the long history of Jewish religion, Bede could show his people that they actually had joined an ancient faith with a great history. The one true God was worshipped in distant lands, in ancient times and by exotic peoples like the Jews: the Anglo-Saxons, he implied, would be foolish to be one of the few peoples not to recognise this God.

Bede was a cloistered theologian; you might think that a cunning politician like Alfred the Great would write about the Jews in a rather more simple and patriotic fashion. But Alfred actually drew a link between his laws and those of Moses for very similar reasons to why Bede connected Anglo-Saxon and Jewish religion. The preface to Alfred’s law code begins with Moses and the Jewish law (and the code is divided into 120 chapters, matching the age of Moses when he died!), but then moves on to the apostles and the rules which they imposed upon gentile converts to Christianity. As the true religion spread amongst many peoples, Alfred tells us, meetings of bishops and councillors came together to apply Christ’s mercy to their laws. Having received Christianity, the English did the same. For Alfred, in other words, the connection between the Anglo-Saxons and Israel was also a connection with all peoples who received the true religion and make good laws; his laws did not replace those of Moses as the God-given rules for an elect nation, but sat in a great tradition which began with Jewish law.

For both Bede and Alfred the Anglo-Saxon interest in the Jews was not about expressing a self-important and insular sense of ‘chosenness’, but about belonging to an ancient and universal community of faith.

Conor O’Brien is a Junior Research Fellow in History at Churchill College, Cambridge. He works on the intellectual and religious history of the early Middle Ages and is the author of a study of the image of the Jewish Temple as used by Bede: Bede’s Temple: An Image and its Interpretation.