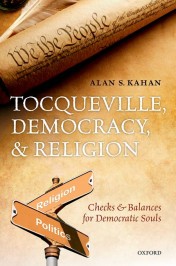 Tocqueville, Democracy, and Religion: Checks and Balances for Democratic Souls

Since the 17th century, Western thinkers have struggled with the problem of how to stop conflicts over religious differences. Not long ago, we mostly thought that the problem had been solved. Two rather different solutions served widely as paradigms, with many variations. One was the American Separation of Church and State, and the other, the French laïcité, usually if misleadingly translated as ‘secularism’.

In the United States, the basic idea behind Separation was to protect religion from the state. Freedom for religion would allow civil society and government to get along in peace. However, in America religion was never absent from the public sphere. If politics and religion were separated by a tall ‘wall of separation’, in Thomas Jefferson’s phrase, there were always wide gates that allowed people and ideas to pass through. In France, by contrast, the fundamental principle was to protect the state from religion: a public sphere free from religion should keep religious differences out of it. In France, in keeping with the stress on creating a religion-free zone, there was neither a wall nor a gate, but rather a minefield full of high explosives to discourage trespassers.

Religion has always had a special role in American political life, as both a basic freedom and a seminal influence on public, not just private, life. Abraham Lincoln’s second inaugural address is as much a meditation on theology as on politics. God has been mentioned in every American President’s inaugural address. The idea that the government ought to look favourably on religion in general, albeit with special favour on none in particular, is widespread. After all, the First Amendment to the United States Constitution does not just forbid the establishment of a national religion, it insists that religion should be free from government restriction. There is nothing about limiting the role of religion in American life.

In France, matters are different, although less different than people think. The famous law of 1905 separating Church and State ended the government payment of priests, pastors, and rabbis, and abolished the ministry of religion, but was not necessarily intended as the war on religion that many of its opponents thought it was at the time and supporters think it is today. There are two interpretations of laïcité in France. On the one hand, when Jules Ferry, Minister of Education and founding father of laïcité in France, created the first program of secular ‘moral instruction’ for French public schools, he included a section on ‘duties to God’ – a very American-like gesture. But a different view of laïcité, once the province of the left but now with increasing resonance on the right, says religion, has no business being visible in public – no burkas on the street; no headcoverings, visible crosses, or yarmulkes in the school, and so on. As Emile Combes, another founding father of French laïcité, put it: “All we ask of religion … is to restrict itself to its places of worship, to limit its instruction to its faithful, and to forbid itself any contact with civil, and political life.” Any time it attempts to leave those narrow boundaries, Combes’ successors regard it as an attack on the Republic.

Today, both the American and French approaches are generating precisely the sort of politics vs. religion controversies their authors hoped to end, and neither seems adequate in the face of the changes posed by the contemporary world, chiefly though by no means exclusively those presented by radical Islam. Perhaps Tocqueville had a better solution.

Tocqueville firmly believed that religion properly understood was freedom’s friend, not its enemy, and that democracy was the friend of God, not God’s enemy. Religion and the state should be like two adjoining houses which share a common wall, but have separate entrances. In the hallway of religion, once one enters, one hangs up one’s right of individual inquiry and decision and accepts divine authority. In the hallway of politics, one hangs up one’s religious dogmas and accepts the decision of the majority while retaining one’s freedom of thought and action. The wall between religion and the state should be thin, however, so that the noise in one can be heard clearly in the other. Indeed, the moral expression of religion ought to be heard so clearly in the house of politics as to be able, if need be, to wake up its occupants in the middle of the night, and religion should never be allowed to be so indifferent to society as to be able to ignore a catastrophe happening next door. You hear a lot of things through a thin partition. Politics and religion must recognize their inevitably intimate relationship.

Tocqueville thinks we need walls between religion and the state, but they need to be thin, and not surrounded by politically explosive devices like the French ban on headscarves or government encouragement of religion in America. Only then can both religion and the republic profit from a mutually beneficial relationship. Perhaps it is time to explore his approach.

Alan S. Kahan is Professor of British Civilization at the Université de Versailles/St. Quentin-en-Yvelines, France. He is most recently the author of Tocqueville, Democracy, & Religion: Checks and Balances for Democratic Souls, and has published widely on Tocqueville, liberalism, and the relationship between intellectuals and capitalism.