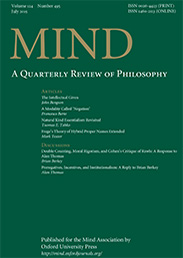 Mind has long been a leading journal in philosophy. For well over 100 years it has published the best new work in all areas of the subject, including epistemology, metaphysics, logic, ethics, philosophy of mind, philosophy of language, philosophy of science, and the history of philosophy.

Suppose the government runs random screening for a very rare mutation – Mutation X – present in one in every million. The test is 99% accurate. If your result is positive, does this mean that you probably have Mutation X?

No. Imagine that there are 100 million people, of which 100 are X-carriers and 99,999,900 are not. On average, 99% of the X-carriers, that is 99 people, will test positive. But one percent of non-carriers, that is 999,999 people, will also test positive. So you know that you are in one of these groups, but not which. In fact, you should be about 10,000 times more confident of being in the non-carrier group, because there are 10,000 times more people in it. You should be practically certain that the test is wrong.

This is a secular, quantitative, and imaginary application of the simple and devastating critique of religion that we find in David Hume’s great 1748 essay ‘Of Miracles’. Hume’s main point is that ‘no testimony is sufficient to establish a miracle, unless the testimony be of such a kind, that its falsehood would be more miraculous than the fact, which it endeavours to establish’.

Its real secular applications are widespread. If a reliable journal reports an experiment that violates well-established physical laws, or if a senior politician quotes a surprising statistic, or if an intelligent person of general good sense testifies that homeopathy cured her gallstones – in all such cases and in innumerable others, always ask yourself: what is more likely? Is it (a) that the experiment/politician/person was involved in some error or fraud, or (b) that the thing it reports is actually true? And usually (a) wins by a mile. The general lesson: if a reliable witness reports something amazing – don’t believe it.

Turn now to religion. In our time, as in Hume’s, billions of people all over the world derive their moral framework, attitude towards life, and conduct towards others from belief in a supernatural entity and the miraculous achievements of its terrestrial agents: Moses, Mohammed, or Jesus. The evidence on which they base these life-changing (and in extremis, for others if not themselves, life-ending) beliefs derives entirely from (scriptural) testimony. How much support does that testimony really give those beliefs?

Practically none, said Hume, because which is more likely: that the Red Sea should – magically – part just long enough for the escape of an enslaved people, or only that they should preserve such a myth? That an angel visited an Arab businessman in a cave, or only that half the world should be deceived into believing this? “That the whole natural order be suspended, or that a Jewish minx should tell a lie?” (This was Christopher Hitchens’s question about the virgin birth; but I think Hume would have enjoyed both its irreverence and its specific mockery of the ‘Roman superstition’.) The questions practically answer themselves, and the answers undermine all of the evidence that anyone in modern times has ever had for the central claims of Judaism, Islam or Christianity. Hume concludes with venomous irony that ‘the Christian Religion not only was at first attended with miracles, but even at this day cannot be believed by any reasonable person without one.’

But in truth, and as Hume knew, religious belief is no miracle but a natural phenomenon with natural causes. Hume was supreme amongst philosophers in balancing an acute sensitivity to the demands of rationality with a clear-eyed appreciation of the infirmities that make everyone fall short of them. The consequent tension is the central theme of his greatest work, Book I of the Treatise of Human Nature (from which he omitted ‘Of Miracles’ in face of the real dangers then attending public atheism). His Natural History of Religion documents the operation, over history and prehistory, of those infirmities that in his view begot modern monotheism. Driven by fear, we impute agency to natural processes around us – this leads to polytheism. Driven by servility, we compete to attribute extreme and flattering qualities to these fictional agents, until (as he wrote): “a limited deity, who at first is supposed only the immediate author of the particular goods and ills in life, should in the end be represented as sovereign maker and modifier of the universe”. Fear and servility: these sources of religion may in barbarous times have seemed, and have often really been, conducive to survival, but they never had much to do with truth.

But neither are they irresistible. In 1784, Immanuel Kant wrote that”Enlightenment is man’s emergence from his self-imposed immaturity. Immaturity is the inability to use one’s own understanding without another’s guidance […] ‘Have the courage to use your own understanding’ is therefore the motto of the Enlightenment.” Hume’s point about miracles is a specific application of Kant’s principle: if somebody – anybody – speaks of miracles, don’t just believe it. Always weigh for yourself how likely it is that these things happened, against the speaker’s tendency to error and his interest in getting you to believe. That is quite important enough, but it hardly exhausts the value of Kant’s message. Skepticism of grand claims and distrust of authority remain our best safeguards, not only against superstition, but also against mass hysteria and many modern forms of social and state-imposed tyranny.

Arif Ahmed is Senior Lecturer in Philosophy at the University of Cambridge and, from October 2015, a Fellow of Gonville and Caius College. He has written on decision theory, probability, religion, and the philosophy of Wittgenstein. He is the author of "Hume and the Independent Witnesses," published in Mind.